GIS for Everyone, by Anyone

Earlier this week I was meeting with one of the directors of a large state agency. Among other topics we discussed, he told me that his organization was adopting a policy to move away from custom application development. Whenever possible they would serve internal and public needs with off-the-shelf applications, or better yet, with those that can be easily custom-configured without the need for programming.
When asked why, he explained the last custom application they’d deployed had to be abandoned – the programmer had left for another job, had taken knowledge of its internal workings with him, and they were unable to hire (because of budget constraints) the programming expertise needed to make the necessary updates to the application. 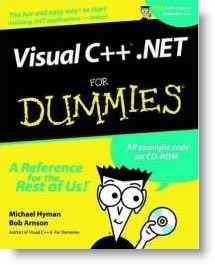 What color is your parachute?
This same sentiment was echoed while I was visiting with a user in Florida earlier this year. They’d also been stung when several programmers left, leaving behind a key public application that they could no longer maintain.
But before I incur the wrath of developers everywhere, it’s often the case that a totally custom application is the only way to provide a finely tuned user experience, or bring into play additional capabilities and components that are essential to the target user. You can only go so far with a configurable application. Nevertheless, configurable applications are easy to maintain and deploy, can be created more quickly and easily than ever before, and perhaps most importantly can be built by just about anyone.
For example, using ArcGIS Online I can assemble a map and configure how the user interacts with it, including choosing from a variety of basemaps, adding my operational layers, adjusting layer transparency, setting display scales, and also configuring what the user sees and experiences in the pop-up window when they click a map feature.
This easily authored webmap is now a building block that can be used in configurable templates that can be published directly from ArcGIS Online (see this blog post for more details), providing the ability to build a custom-configured application and deploy it literally in a matter of minutes.
In the past, doing all of the above and lifting something by coding from the ground-up would have taken a long time and a lot of skill. 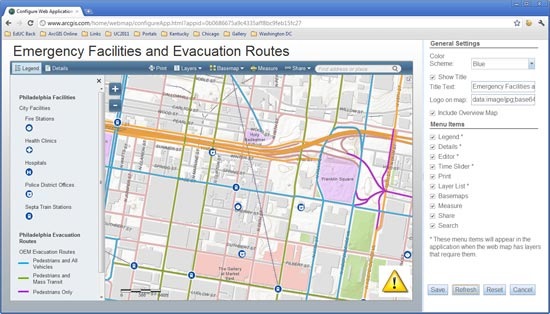 A custom-configured application being authored with an ArcGIS Online map. Simply fill in the blanks and check the boxes to include the tools you want.
For more customized and extensible solutions, ArcGIS Viewer for Flex has been popular among Esri users since its introduction, and there is also a configurable ArcGIS Viewer for Silverlight, currently in beta, that leverages the same webmaps and offers the same ease of configuration; both allow you to build custom applications with little or no programming skills. 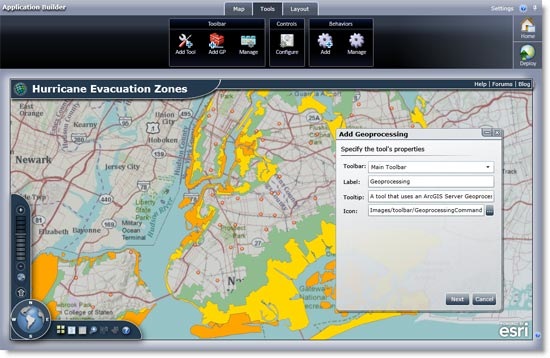 The ArcGIS Viewer for Silverlight application builder even lets you plug-in geoprocessing tools to extend the applicaton’s capabilities.
While visiting a local government user a few months ago, I spoke with one of the GIS staff members who had been building a custom application using ArcGIS Viewer for Flex. He said he had chosen it not because he was particularly interested in Flex, but because he found it very easy to create a custom application even though he was not a programmer himself.
“Esri has always built great developer tools for programmers and software for the GIS professional,” he told me. “My problem is I want to reach non-GIS users in my organization and post some public-facing apps. Now for the first time I feel empowered. Even I can build custom applications.”
It’s clear that it’s easier than ever for anyone to build simple custom applications, and all you need is a browser or a text editor. “This isn’t just GIS for everyone,” he went on to say. “It’s GIS by anyone.”
I couldn’t agree more.