ArcGIS for Desktop has been developed for Windows Operating systems, but there are many users out there running ArcGIS Desktop on Macs. Two options are available.  The user can install Windows in Boot Camp, a native feature of the Apple Inc.’s OS X operating system, or they can use a virtualization program, such as Parallels or VMWare Fusion.  In order to assess which option to use, it is important to understand each option, their limitations, then to configure for best performance.  The Performance Engineering team has begun testing ArcGIS Desktop, including ArcGIS Pro, on the Apple MacBook Pro in order to develop performance benchmarks and configuration recommendations. In general we have found the UX of ArcGIS Pro in these environments is quite good.  In general, the ArcGIS Pro system requirements should be considered best practices no matter if you are running ArcGIS Pro natively within a Windows environment or using the options available for a Mac:  http://pro.arcgis.com/en/pro-app/get-started/arcgis-pro-system-requirements.htm

Boot Camp is a utility for Macs that allows users to install and run Windows within a separate bootable partition.  Running Windows in Boot Camp is a native feature of the Mac OS X operating system, therefore this is the most financially affordable option since there is no additional software to be purchased.   However, users may not prefer this option since they are not able to run both OS X and Windows at the same time and a reboot is required to gain access to the Mac software. The Windows partition is configured during the Boot Camp install; this is an important step for optimal performance.  Users should carefully consider how much CPU, Memory and hard disk will be available to the Windows OS, this is of course based upon how many cores and memory is available in the MacBook. The recommended minimum hardware configuration for the windows partition running ArcGIS Pro is:

If Windows has already been installed on a Mac using Boot Camp, users can use Parallels to run the Boot Camp partition as a virtual machine within OS X.  Users must purchase the Parallels software to use this virtualization option.  The advantage is that users can run both Windows and Mac applications without rebooting.  This is a suitable option for users whom have newer Macs with more powerful hardware resources in terms of CPU, Memory and an Nvidia graphics card like a GeForce GT 750M.  This is not a recommended option for users whom have older Macs with less than 4GB of RAM since Parallels puts more demand on the Mac’s processors and memory as both operating systems are running at the same time.  Our testing was performed on Parallels Desktop 11 for Mac Business Edition.

In order to gain access to the Windows OS, users work within a Parallels VM.  Configuring this VM is critical for optimal performance.   By default the VM is configured with 2vCPU, 1 GB of RAM and 512 MB of graphics memory.  This configuration is not suitable for a graphically intensive, multi-threaded application like ArcGIS Pro. The minimum hardware configuration for running ArcGIS Pro in Parallels is:

The following screenshot describes how the CPU and Memory can be configured within the Parallels hardware settings.

The following screenshot describes how the Graphics memory be increased and Vertical Synchronization can be disabled within the Parallels hardware settings. 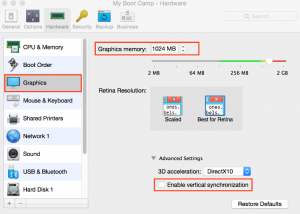 Default optimization settings which should not be changed include “Performance, Faster virtual machine” and Power, Better performance”.

Users who do not have a powerful graphics card have reported flashing in the map display, changing the default display setting from DX11 to DX9 has helped resolved these issues but these users still experience slower rendering times than those with a discrete graphics card present.

VMWare Fusion Pro also provides Mac users with virtualization technology to run Windows and ArcGIS as a virtual machine within OS X.  Users must purchase VMWare fusion to use this virtualization option.  Similar to Parallels, this is a suitable option for users whom have newer Macs with more powerful hardware resources in terms of CPU, Memory and an Nvidia graphics card like a GeForce GT 750M.  VMware Fusion tools is required to be installed within the VM for 3D acceleration. By default, a VMWare Fusion VM is configured with only 1vCPU, 4GB of RAM, and 512 MB of graphics memory.  This configuration is not suitable for a graphically intensive, multi-threaded application like ArcGIS Pro.  The minimum hardware configuration for running ArcGIS Pro in VMWare Fusion is:

*Preliminary testing has shown 2GB of graphic memory required for optimal performance, more than what it required for Parallels.  Esri is continuously working refine the efficiency of the frame buffer and this requirement may change in the future releases.

The following screenshot describes how the CPU and Memory can be configured within VMware Fusion VM settings.

The following screenshot describes how the increase shared graphics memory within the VM display settings.

Default display settings which should not be changed include, accelerate 3D graphics and always use high performance graphics.

In summary, ArcGIS for Desktop can optimally run on Macs, however proper setup and configuration is essential.   Newer Macs, with discrete GPU’s, have more powerful hardware resources, and can optimally support a graphically-intensive program like ArcGIS Pro.   A final configuration recommendation is within the Mac OS X setting, where high performance graphics does not perform graphics switching when running on battery power.  When this setting is enabled, ArcGIS Pro rendering times are more stable.