In an earlier post, we described how you can customize the Esri vector basemaps (now in Beta 2 release).  In that post, we provided an example of changing the colors for an existing map style to create a different look for the map, which will probably be the most common way in which the vector basemaps are customized.  We also shared the step-by-step instructions for how you can create a custom map.

In this post, we wanted to share examples for a couple other ways that you can customize the vector basemaps that were mentioned:

The current Esri basemaps, delivered as raster tiles, are designed to support a wide range of users, including both local users within a specific country and other users around the world.  For this reason, we try to include information in the map that will make them useful and acceptable to both sets of users.  This includes labeling the maps in both “local” language (e.g. Greek in Greece, Thai in Thailand) and “global” language (i.e. English, or transliterated text).  This also includes displaying disputed boundaries as they are commonly recognized by international organizations and standards.  In some cases, we present different versions of tiled basemaps depending on the location or region preference of the user.

Given the ability to re-style vector basemaps, there are new and simpler ways to customize the maps so they better support both local and international users.  Rather than include two sets of labels on the map (e.g. Greek and English for Greece) to support both sets of users, you can have two separate styles (e.g. one with Greek, the other with English) and then present the appropriate one to the user based on their location or region preference.  Similarly, you can have separate styles that represent disputed boundaries differently to conform with international or local standards.

Below is an example of a custom map that has been created from one of the available Esri vector basemap tile layers. 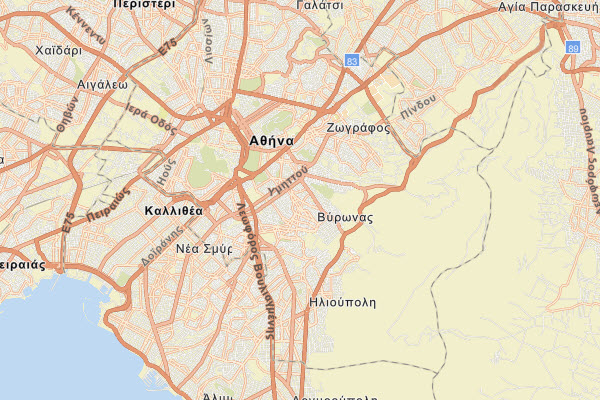 Because these layers appear multiple times in the map style for different zoom levels, the changes were made with a batch find and replace to update all of the appropriate layers. The same changes could be applied to all of the available map styles since they reference the same set of vector tiles.

Some languages require the use of a different font in order to correctly display the characters. The resources folder in the Esri Beta 2 vector map styles has additional fonts including Arial Unicode MS Bold and Regular. You can change the fonts for specific features to display one of the faces of Arial Unicode. Additional fonts will be added to the Esri vector style resources during the beta period.

The source Esri Community Map data used to build the vector tiles has local language values populated for a number of feature classes in many places around the world. Throughout the Beta period, we plan to expand areas where local languages are available. There is a known limitation currently where certain languages that display right-to-left scripts, such as Arabic, are not drawn properly.  View this web map, complete with bookmarks, showing some examples around the world that display with local languages at scales ~1:288k and larger.

Below is an example of a custom map that has been created from another of the available Esri vector basemap tile layers. 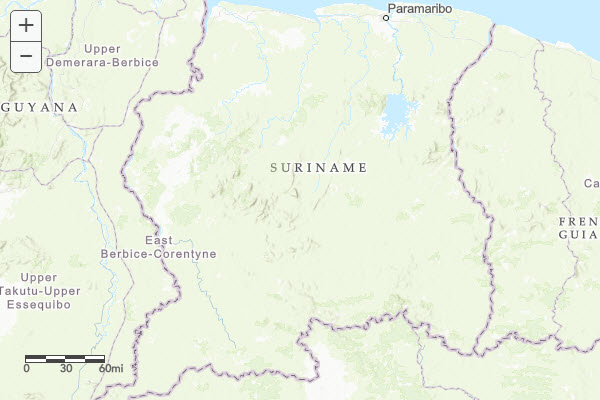 In this example, the World Topographic Map tile layer was updated by changing the “filter” used for a couple types of administrative boundary layers to show the boundaries as they are recognized by the country of Suriname (though not by most other nations):

In this case, because these layers appear two times in the Topographic map style for different zoom levels, the changes were made to two layers. These layers were found by searching for the “id” of the layers shown above (i.e., “Disputed admin0” and “Boundary line/Admin0”). The same changes could be applied to all of the available map styles that include boundary layers since they reference the same set of vector tiles.

The source Esri Community Map data used to build the vector tiles has disputed boundaries defined for many areas around the world. View this web map, complete with bookmarks for different regions, that show the set of disputed boundaries currently available in the Esri vector basemaps.  If you click on a specific boundary feature, you will see a popup with important information on the “DisputeID” (needed to update the “filter” as described above) along with hints on how the boundary might be displayed for a different country perspective.

In the Esri vector basemaps, internationally recognized national boundaries (e.g. United States / Canada border) are typically represented with different types of “solid” lines while disputed boundaries (e.g. parts of French Guiana / Suriname border) are typically represented with “dashed” lines.  In some cases, a country will want to not render (i.e. make invisible) a disputed boundary that it does not recognize.

These examples are available in a Sample Vector Tile Layers group if you would like to view and download the styles.  We will add other vector tile layers to this group over time, including some that are created by users and shared with everyone.  If you create a layer that you would like to see included, please follow the best practices for sharing and include a tag of ‘vector style’ in your layer item.

Additional tools will be available to customize vector basemaps to meet your specific needs.  More information and examples for how to customize map styles will be published in separate blog posts, such as: