This week, we released an update to the Esri vector basemaps that were introduced late last year. These vector basemaps can be accessed in ArcGIS Online and used to build web maps and apps. To start using these layers, clear your browser cache. This update of the vector basemaps is our Beta 2 (B2) release, with some important updates and enhancements as we work toward a final release. The existing web maps are updated to use the new vector tile set and a new set of vector tile layers are published in the eight different map styles. We also posted a series of blogs related to the first Beta release of vector tiles. These posts are updated with information related to using the B2 vector tile layers and web maps. As part of this latest release, Esri updated the data content, vector tiles, and styles through which the vector tile layers are displayed in ArcGIS.com.

If you are using any of the web maps from the Esri Vector Basemaps (Beta) group, you won’t have to do anything differently to be able to use new vector basemaps. The web maps include the latest tile layers with updated data and styles of B2.

If you are using a customized tile layer copied from one of the first Beta Esri vector tile layers, with root.json style file you updated, your maps will continue to work and will continue to display all your map customization. As with the standard tile layers (see above), your customized layers will not take advantage of the updated tile set of B2. Since both the data and the basemap styles are updated in B2, we recommend you update any first Beta tile layers that you customized with the latest B2 vector tile layers. Any customization will need to be re-applied in the root.json style now associated with this set of new B2 tiles. See updated blog posts How to Customize Esri Vector Basemaps and Customize Esri Vector Basemap Boundaries and Labels for more detail.

How to find Esri vector tile layer and web maps?

There are several ways to find the latest set of eight Esri vector basemap styles in ArcGIS Online. One way is through the Esri Vector Basemaps (Beta) group. Bookmark it! This group will reference the latest vector styles during the Beta period. Some styles closely resemble existing Esri basemaps and other styles are only in the vector maps. Web maps can be used as a basemap for adding other layers. Another way, in ArcGIS Online… Add > Search for Layers > Find: owner:esri_vector > In: ArcGIS Online. Tile layers can be added to existing maps either as a basemap or an overlay layer.

What are the changes between Beta 2 (B2) and the first Beta?

Starting with the tile changes, there is a completely new tile set to use with B2 that is published through a different URL than the first Beta. The new URL was necessary due to non-backward compatible changes between the first Beta and B2. The B2 URL allows users to continue to use their existing vector tile layers and web maps while migrating to the new layers. All of the latest Esri vector basemap tile layers are pointed to this new B2 URL path.

The data used to create the tiles and maps has been significantly updated between the first Beta and B2. More than 150 regions and communities have updated data. The regional updates come largely through our regular commercial and open source data updates, while the community data updates are sourced through our Community Maps Program. One of the larger geographic areas added through this program is large-scale data for the Kingdom of Thailand contributed by Esri Thailand. Other new data contributions cover areas including: Asheville, NC; Broome County, NY; Charlottesville, VA; Dakota County, MN; Fullerton, CA; Glendale, AZ; Honolulu, HI; San Joaquin County, CA; Sedona, AZ; Sherman, TX. Many more communities that already participate in the Community Maps Program provided updated data since the first Beta. That new data is now visible in the B2 vector maps. Because all the vector basemaps are styled from a single set of vector tiles, community map data contributed through the program is integrated into our global database and available in all eight Esri styles.

Esri continues to provide the same initial set of eight different map styles created from the single vector tile service. This set of vector basemaps is available through the Esri Vector Basemaps (Beta) group. This group includes vector basemaps in multiple styles, some that closely resemble existing Esri basemaps (for example, Streets, Topographic, Light Gray Canvas), and others that were new in the first Beta (Streets at Night, Navigation, and Imagery Hybrid). The non-backwards compatible changes between the first Beta and B2 that created the new tile set service also required all new root.json files for the eight Esri styles. One of the main changes made in B2 is a code change from the use of an underscore “_” to a slash “/”. We consolidated three land use layers, Sports, Landscape, and Pavement, into a single Special Area of Interest layer. Other changes improve symbols and/or label classes for roads, tunnels, water lines and areas, marine area, and buildings. Overall map style refinements continue to improve the map display colors, line widths, and labeling properties.

Although we did not make any changes to the fonts displayed in the eight Esri basemaps, we uploaded additional fonts to the resources folders that allow our users to make changes to the map design. More fonts are planned in future updates as well. Users can take advantage of the additional fonts and apply them to their custom version of any Esri basemaps. One of the more important font additions is the inclusion of Arial Unicode MS Bold and Regular. If you are changing labels to display a non-Latin local language (for example, Thai in the Thailand example below) an additional font change to Arial Unicode for feature labels must be made. This allows the local characters that are part of our data to display correctly. See updated blog posts How to Customize Esri Vector Basemaps and Customize Esri Vector Basemap Boundaries and Labels for more detail. 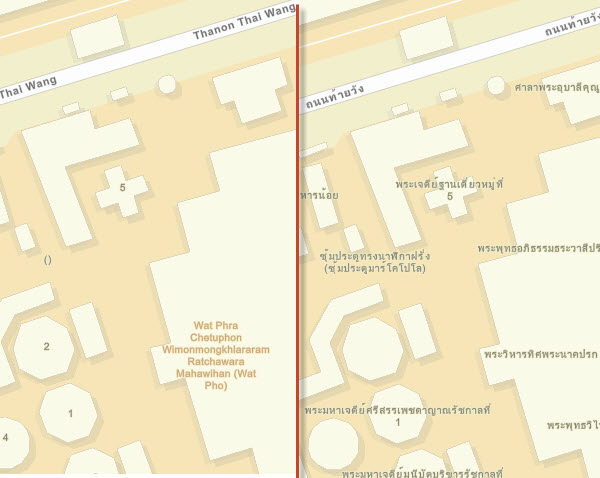 As we continue through the beta phase, look for announcements about additional improvements and fixes to the vector map styles to improve selection of cities, disputed boundaries, and coastline displays. We also plan to expand the selection of fonts available to allow users to expand the customization of their vector basemap styles. One of our goals is to make commercial source data updates and new community additions to the maps on a more frequent basis.

This means the Esri vector basemaps will have more current data updates than our other Esri basemaps available at ArcGIS.com. This currently is seen in areas like Atlanta, GA; Cincinnati, OH; and Midland, TX; where updated data is available first in our vector tiles (and subsequently in all our vector styles) several weeks before these same updates will start to appear in our raster cache tiles.

This is our latest vector tile Street map style in Cincinnati, OH. 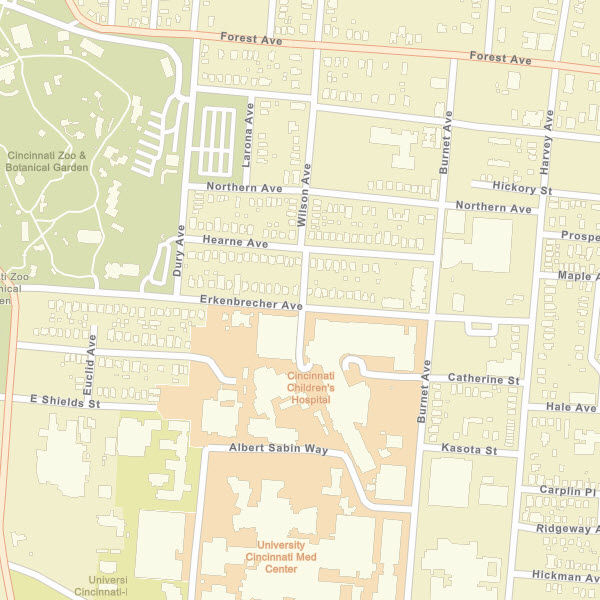 Compare the same area to our raster World Street Map below. The additional detail of buildings and zoo paths are already visible in the vector basemaps, but are not yet available in the raster basemap. Those raster updates are planned for release in early June, nearly a month after updated vector tiles are available in ArcGIS.com. 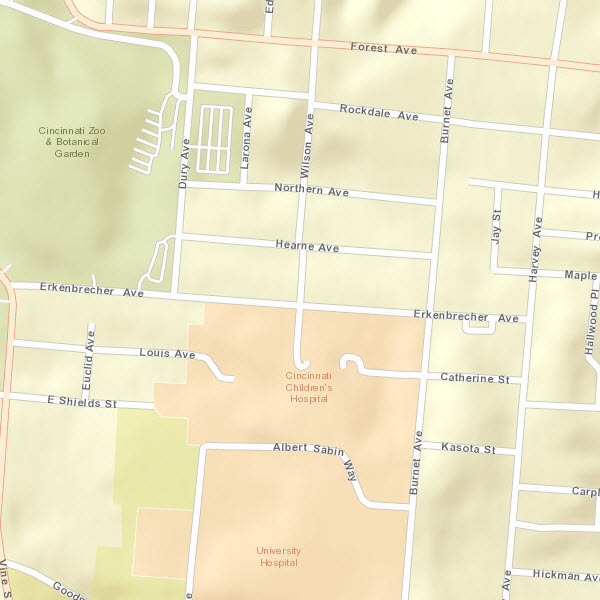 And it’s not just a single basemap getting updated. Because all the styles utilize the same vector tile set, we can display the additional data across all of the other B2 vector basemap styles. 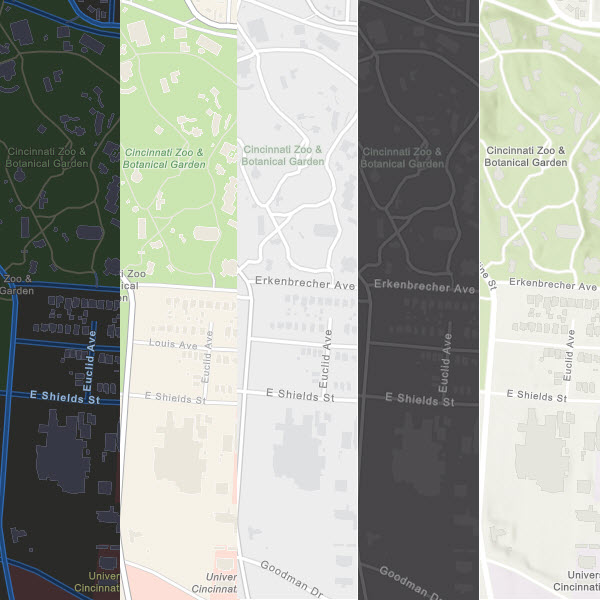 And the vector tile layer can be used as an overlay to world imagery, as seen in our Imagery Hybrid web map. This vector layer combines roads, boundaries, and place names (cities, buildings, land use, and so on) into one map style. 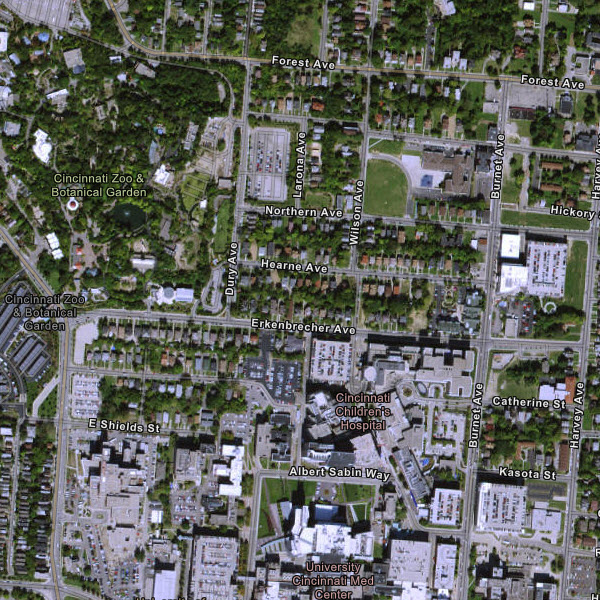 For participants in Esri’s Community Maps Program, most data contributions will appear in both vector and raster basemaps on ArcGIS.com. There are a few feature classes where this is not the case. Roads and Administrative lines in our vector basemaps are currently using our commercial data sources. We are working to include a user option to display commercial or community contributed features in a future vector tile release.

Important Note:  The Esri vector basemaps are currently available in beta release and are subject to change during the beta period. See details of B2 changes above. Users will want to periodically update their maps with the latest vector tile layers that are published by Esri to keep up with the latest changes. Custom styles that are created during the beta period may need to be updated to take advantage of updates in the vector tiles, and custom styles may break if significant changes to the vector tiles are required. As with the existing Esri basemaps, the new Esri vector basemaps will be freely available to all ArcGIS users.