How large a DEM can the TopoToRaster tool create? 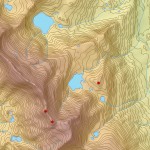 The TopoToRaster tool is primarily used to create hydrologically correct digital elevation models (DEMs) from contour data. Additional input information such as spot heights, known locations of sinks, streams and the outline of lakes can also be used to further improve the quality of the output DEM.

ANUDEM is developed and maintained by the Fenner School of Environment & Society at the Australian National University. It calculates DEMs with sensible shape and drainage structure from a series of topographic data sets . TopoToRaster internally calls ANUDEM, which imposes some size constraints on the size of the output raster.

When TopoToRaster is run as a geoprocessing tool within ArcMap (pre ArcGIS 10.1), the output raster was limited to a size of roughly 5,500 columns by 5,500 rows, i.e. the output raster cannot have more than about 30 million cells. Increasing the amount of computer memory has no effect on the size of the output raster when using this version.

The volume of input data, however, can also cause TopoToRaster to run out of memory. If your input features have many millions of input vertices it is advisable to split the area up into smaller regions.

Equally, if you require a larger output raster than is currently possible, splitting the area up into manageable chunks and running TopoToRaster using the MARGIN parameter is an effective solution. The output rasters can then be combined into a single raster via a Mosaic dataset or by using the CellStatistics, Mosaic or MosaicToNewRaster geoprocessing tools.