I dropped a hint about the Integrate tool in the previous post and decided it was worth giving a bit more time to. The way I found out about the Integrate tool was through working on a different problem altogether – I was helping somebody who was trying to figure out why the Polygon to Line tool produced lines that were all broken up thus defeating his purpose of symbolizing boundary lines the way he wanted to.

The problem in this case was that the topology in his data was not sufficient. He was looking at some historical national boundaries, in particular the boundary between Poland and the former U.S.S.R. The Polygon to Line tool did indeed create lines that were all broken up (as shown in the above figure).

To verify that the result of Polygon to Line, you can interactively select the output boundary by using the Select tool to outline a relatively tiny rectangle that intersects the boundary. If the entire boundary line is not selected (like the thumbnail above), then it’s very likely that the topology of the input polygons was not good to start with.

To verify that the topology is insufficient, you can use the Feature Vertices to Point tool, and Identify the point at the edge of one of the selected lines that makes up what should be a single boundary line. In the screen captures below notice the coordinates are slightly off (look at the x,y coordinates in the “Location” box of the screens.) Do this a few times as you will get an idea of how far off the coordinates are. 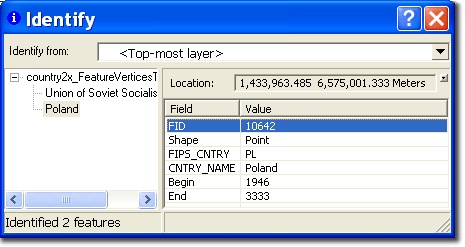 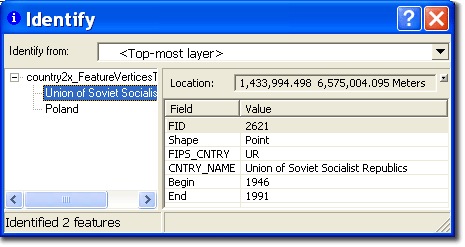 For the point location that is identified here, note that the Location is slightly different — even this difference of 2.76 meters is enough to cause problems.

To fix the problem, use the Integrate tool. If there is any chance that you’ll need your original data, make a copy of it before proceeding as the Integrate tool will modify the original input features rather than producing a new output. The optional XY Tolerance parameter should be set to just barely exceed what you determined was the distance to correct when you used the Identify tool and reviewed the distances (as in the screen shots above.)

By the way, this problem was not submitted to Mapping Center — instead it came from a participant in CartoTalk, which is a robust online forum for professional cartographers and map makers. I try to get on there a few times a week as there’s usually something interesting to me or there’s somebody who has a question about using ArcGIS that I can help with. If you’re spending most of your days making maps, and didn’t know about CartoTalk until just now, take a minute to have a look.