Some of you might wonder how I created the indicatrices (ellipses) in the Tissot’s Indicatrix blog entry. It’s based on creating geodesic buffers from point features that are in a geographic coordinate system. If you review the blog entry on the different tools for creating buffers with ArcGIS, you will see that:

“If point or multipoint features are being buffered, if the data are projected to a geographic coordinate system, and if a buffer distance is specified in linear units, the Buffer tool will create geodesic buffers…A geodesic distance is calculated across the curved surface of the earth.”

To create the indicatrices. first find the locations of the intersections of the parallels and meridians of the graticule. To do this, I copied the World30 dataset from the Esri Data and Maps DVD to my working file geodatabase. I then created a new feature dataset, using the WGS84 geographic coordinate system (features in a geographic coordinate system are a requirement for making geodesic buffers around points). I converted the polygons in the World30 polygon feature class to lines using the Feature to Line tool (so that lines of adjoining polygons were not duplicated in the output) and wrote the output into the new feature dataset I had just created. I didn’t want any ellipses along 90 degrees north or south, so I started an Edit Session and deleted the graticule north and south of 60 degrees. 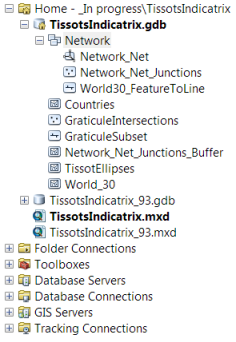 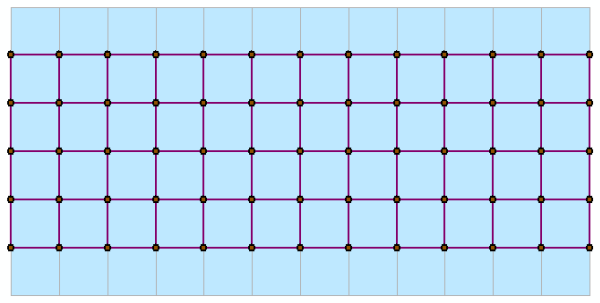 I used the Buffer tool in ArcToolbox (in the Analysis > Proximity toolset) with the junctions as the input using a linear unit (another requirement to make geodesic buffers) at a distance of 500 kilometers and keeping all the other defaults. The output was ellipses at the intersections of the graticule. 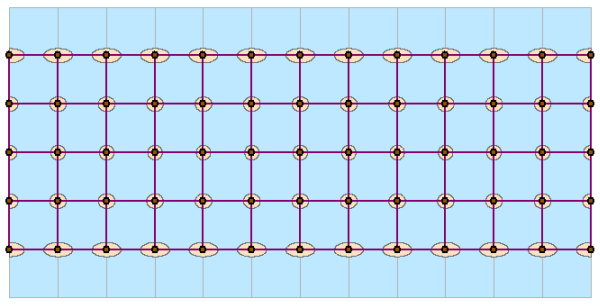 To clean things up for the map template I shared with you, I renamed the buffer feature class and copied it into the location of the other feature classes. I also deleted the feature dataset since I didn’t need it anymore, but I noted the data analysis methods in the layer’s description in the .mxd.

Now you not only know how I created the indicatrices, you also now know a great method to quickly and easily create points at intersections and lines between them when you have a line feature class (by simply creating a geometric network). You also know a bit more about geodesic buffers and how they can be created when you have points in a geographic coordinate system as the input features (note that you can’t create them from line or polygon features at this time).

Thanks to Ken Field, our newest Mapping Center Team Members, and Margaret Maher, Esri Technical Support, for their help with this blog entry!