Map orientation: When true north is NOT at the top 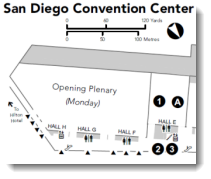 We got an excellent comment from a reader this week about maps that are not drawn with true north at the top. Referring to the San Diego Convention Center (SDCC) maps that are included in Esri User Conference agendas and other publications, Stephen wrote:

The map of the San Diego Convention Center is upside down, in my opinion. Flipping it and putting north toward the top would make the map much more intuitive to read and interpret. I always orient myself with north up on the map…

Here is one of the maps in question (figure 1). 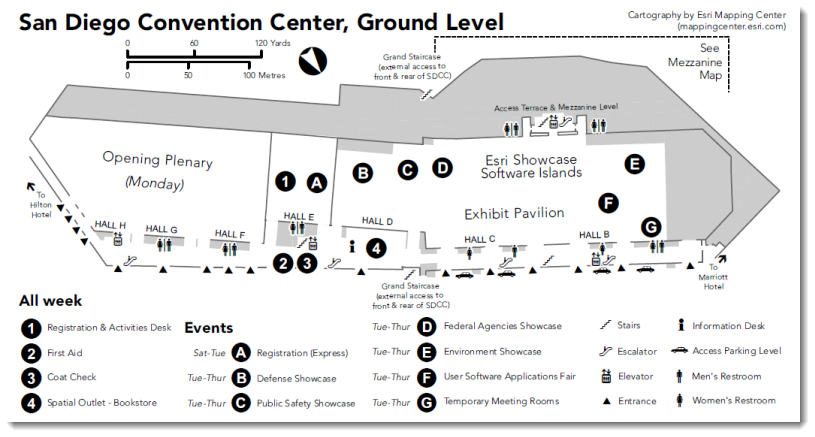 Figure 1. A map of the San Diego Convention Center with north toward the bottom right

Often, maps of tourist locations (for example, buildings, complexes, portions of cities) are rotated so that true north is not at the top of the map. Instead, these maps are rotated in a different direction, and a prominent orientation indicator (e.g., north arrow) is added to help those who expect the map to depict true north at the top. The question is this: “What direction is at the top of the map?” It is the direction that the majority of people will be facing when they first enter the area that is mapped. Why?

To orient a map means to determine how directions on the map align to directions on the ground. The term comes from Medieval Europe where church scholars drew maps of the known world with the Orient (China) at the top, but today most maps are drawn with true north at the top.

When traveling, people tend to orient maps in one of two ways. Many people keep the map topside up, no matter which way they’re facing. This procedure has the advantage that place names, symbols, and features are easy to read. But it has the disadvantage that map directions aren’t usually aligned with ground directions. When you’re heading south, right on the map is left in reality. Such reverse thinking can make the mind reel. Imagine trying to make a split second decision in heavy traffic about which way to turn! Since this may not be much of a problem in familiar surroundings, it’s easy to forget that there is an alternative.

If you’re in an unfamiliar setting or confusing surroundings, it’s usually easier to find your way if you first orient the map to your direction of travel. Turning the map until ground and map features are aligned has the advantage that you can always determine directions directly. Although you may have to read place names and symbols upside down or sideways, this is easier than trying to unscramble backward directions. You can finesse the problem of markings and labels being upside down by thoroughly familiarizing yourself with them before your trip and by writing down the key data you need in margins or on a separate piece of paper. A disadvantage of this method is that when following a sinuous route you will have to constantly turn the map to stay aligned with the direction of travel.

Assuming that many of the people attending the User Conference (the number of first-time attendees is generally over 30% each year) find the San Diego Convention Center to be an “unfamiliar and confusing surrounding”, the SDCC maps are shown with the main entry at the bottom so that when map readers walk into the building, they are already holding the map in the position that will be most intuitive for them to read.

Of course, long-time attendees or experienced map readers will be comfortable with a map of this facility being oriented with north at the top. They will also, most likely, be so familiar with their surroundings or proficient in map reading that they will also be well able to master reading the map of the SDCC when it does not depict true north at the top, especially since a prominent north arrow indicates the direction of true north.

The maps that are created for the agendas and other print and online Esri publications about the Esri International User Conference in general are oriented with the main entrance at the bottom of the map, since that is the initial point of entry for the majority of visitors and since there are few internal indicators of the orientation of the building to cardinal directions.

Other examples of maps that adhere to this standard cartographic practice include the following:

Sometimes a map is rotated to fit better on the page, as in the example of the Waikiki, Hawaii, map. Sometimes that map is oriented to a prominent feature or landmark. For example, the Hotel Del Coronado map is oriented so that the main building is aligned to the edges of the page. Of course, if the map is published in the context of a larger extent (for example, the city of San Diego, California), the map will be oriented with north at the top, as usual (for example, the Lunch Specials map).

Unfortunately, this map making technique is less evident in online maps. The reasons may be understandable—for example, these maps are often multi-scale and the area mapped fits within a larger extent, or users may want to mash up the content with other maps. However, when these constraints do not apply, it is sometimes better to consider the users’ map reading skills and familiarity with the area they are trying to navigate. In these cases, rotation of the map to a more intuitive or graphically pleasing direction is warranted.

That said, with the increased use of hand-held devices and the ability to rotate the map either to the direction of travel or with north at the top, perhaps more map users will become better able to use north-at-top maps all the time, and we can begin to rely on their improved map reading skills to design maps this way more often.

Thanks to Dr. A. Jon Kimerling, author of Map Use, for his help with this blog entry, and thanks to Ken Field and Andrew Skinner, Esri Cartographers, for their maps of the San Diego Convention Center.