"Semiology of Graphics": The reprint of a classic! 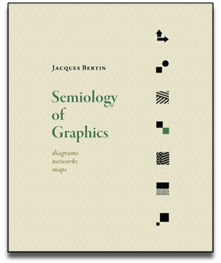 We are thrilled to announce that Esri Press has republished Semiology of Graphics: Diagrams, Networks, Maps by Jacques Bertin.

Originally published in French, in 1967, Jacques Bertin’s Semiology of Graphics is internationally recognized as a foundational work in the fields of design and cartography. Fortified by his practical experience as a cartographer, Bertin took on something no one before him had ever attempted: the task of synthesizing principles of graphic communication with the logic of standard rules applied to writing and topography. Bertin brings theory to life in this book with a close study of graphic techniques, using more than 1,000 maps and diagrams to illustrate shape, orientation, color, texture, volume, and size. This cartographic classic has continuously held its place of significance. Now, with a new epilogue written by the author shortly before his death, this new 2010 edition in English reawakens us to the information design possibilities of modern technology.

Jacques Bertin was a French cartographer and theorist, and a world-renowned authority on the subject of information visualization. In 1954, he founded the Cartographic Laboratory of the École Pratique des Hautes Études, and in 1957 he was named director of education. In 1967, Bertin became a professor at the Sorbonne, and in 1974 he was appointed director of education and director of the Geographical Laboratory of the École des Hautes Études en Sciences Sociales. In the late 1970s, he became head of research at the Centre National de la Recherché Scientifique. Sadly, Bertin died earlier this year, in May of 2010.  However, he was thrilled to know that this book would be coming out and that there was still immense interest in his work and dedication to keeping it alive.