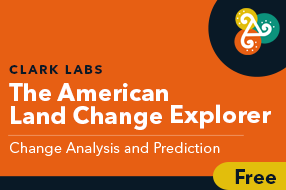 ALCE includes land cover maps for 2001 and 2011 for the conterminous 48 states from the US National Land Cover Database (NLCD).  The resolution of these data is 30 m. ALCE also includes a predictive mapping of land cover for the year 2050 as well as a mapping of the mean potential of land to go through one or more transitions by that date. Users can thus select whether to view:

Note that all change and prediction images in ALCE were created using the American Land Change Modeler (ALCM). Users who subscribe to ALCM can define their own specific areas of interest and undertake unlimited analyses for those areas within the subscription period.

The modeling procedure used is a newly developed algorithm suitable for distributed computing in a cloud computing environment[3]. Briefly, the procedure is based on kernel density estimation of the normalized likelihood of change associated with varying levels of each independent variable. These estimates are then aggregated by means of a locally-weighted average where the weights are based on the degree of conviction each variable has about the outcome at that specific pixel. Testing has shown it to be comparable in skill to a multi-layer perceptron neural network with the added advantages of rapid calculation and capability of being distributed across multiple computer nodes.

Because the drivers of change can vary over space, modeling was done separately for each state. All transitions that met or exceed 2 km2 in area (at the state level) were modeled independently. Within a single state, as many as 128 individual transitions might occur. In total, over the 48 conterminous states, 3330 transitions were modeled.

The modeling process initially establishes the potential to transition. This potential is expressed as a continuous value from 0 to 1 at each pixel for each transition. The procedure then uses the Markovian assumption that the rate of transition experienced in the historical period (2001-2011 in this case) will continue into the future. A competitive greedy selection process then allocates the projected change[4].

To illustrate current day potential to change, a mean potential of transition image was created. With this potential image, users can click on locations to see the reasons why that location has the potential it does. It lists the individual transition potentials for all possible transitions for that specific pixel and allows the user to further determine how its values on the independent variables determined its specific potential.

In the training process for each transition, 50% of historical instances of change and 50% of an equal-sized sample of pixels eligible to change, but which did not (e.g., persistence), were reserved for model validation. The median accuracy over all 3330 transitions was 80% with 79% of change validation pixels being correctly predicted and 83% of persistence pixels being correctly predicted. Thus the models, on average, are quite balanced in their ability to predict change and persistence.

The accuracy associated with more specific transitions varied. A key objective was to be able to monitor and project anthropogenic changes and thus the explanatory variables chosen were focused on such drivers. Consequently, the median accuracy of natural to developed transitions (such as deciduous forest to low intensity development) was 92%. Again, accuracy was evenly balanced (93% for change / 91% for persistence).

Accuracy for transitions between developed categories was lower at 77% (80% change and 75% persistence). A large part of this is because of the inconsistent manner in which roads are classified in the NLCD system. Roads are classified as one of the developed categories (high, medium, low and open development) based on the amount of impervious surface detected within pixels. Alignment of image pixels can cause this to vary resulting in roads that frequently switch classes between the years mapped.

Natural transitions, such as forest to shrub, had the lowest overall accuracy at 74%. This was expected because many drivers cannot be predicted with the variables used. An example would be forest fires caused by lightning. This is also reflected in the fact that accuracy for predicting change was only 71% while that for predicting persistence was 78%.

In states with significant cropland development, natural to cropland transitions were modeled with a 79% overall median accuracy. Accuracies for change and persistence were 78% and 81% respectively.

Finally, this application used a protected lands layer from the USGS. This layer does not include all local or state designated protected lands. Thus, there may be areas that will show potential to change in protected areas.

[1] Elevation data were from the National Elevation Database while slope was derived from those data. All roads data were acquired from the Census Bureau TIGER line files for 2014. Earlier road data would have been preferred, but errors in earlier TIGER line files were deemed to be unacceptable. Country subdivisions, counties and incorporated places were also acquired from the Census Bureau. Protected areas came from the Protected Areas Database of the USGS National Gap Analysis Program. All proximity layers were derived by Clark Labs.

[2] In some states, planning jurisdiction is controlled by county subdivisions (such as in New England), while in others, planning is governed by a combination of counties and incorporated places (such as in many of the western states).

[4] Greedy selection assumes that the specific pixels that will change are those that are ranked the highest. Conflicts are resolved by assigning them to the transition with the highest marginal transition potential.