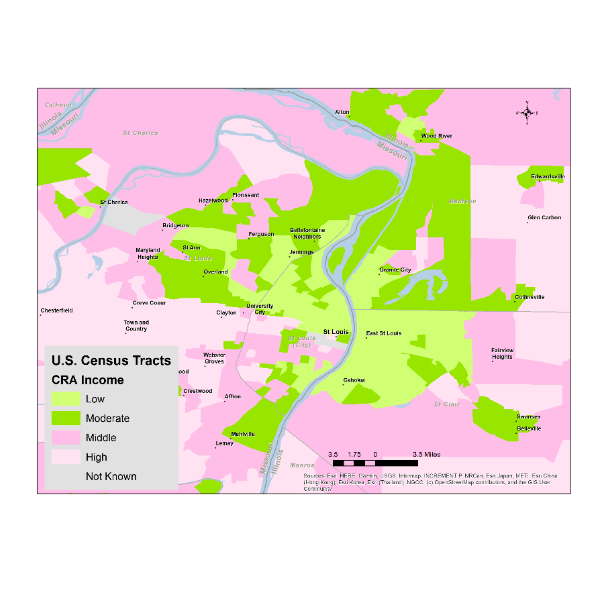 This is the enhanced version of CRAMap 2021 and includes Census Tract geography for the U.S. (July 2021) defined by CRA income category as provided by the Federal Financial Institutions Exam Council. It allows users to export the data in a variety of formats for easy integration with information systems.  CRAMap 2021 covers Low, Moderate, Middle and High income, as well as Distressed and Underserved areas.  Also included is the RPM Unbanked index, an estimate of households lacking access to the primary banking system; the Household Resiliency Index, the ability of households ina tract to withstand a financial shock; and an estimate of Credit Card Line Utilization, to help understand the degree to which households in a tract are using (and "maxing out") their credit lines.

The Community Reinvestment Act (CRA) encourages depository institutions to help meet the credit needs of the communities in which they operate - including low- and moderate-income neighborhoods, distressed middle income neighborhoods, and underserved rural areas - consistent with safe and sound banking operations.

The CRA requires that each insured depository institution's record in helping meet the credit needs of its entire community be evaluated periodically. That record is taken into account in considering an institution's application to its regulator for deposit facilities, including mergers and acquisitions.  CRA examinations are conducted by the federal agencies that are responsible for supervising depository institutions: the Board of Governors of the Federal Reserve System (FRB), the Federal Deposit Insurance Corporation (FDIC), and the Office of the Comptroller of the Currency (OCC).

CRAMap 2021 contains a current database of every Census Tract in the U.S., with its status noted as a Low, Moderate, Middle, or High-income area, based on the relationship of the tract income to the MSA in which it is situated; or, for non-MSA areas, to the County in which it is located.

Low income, Less than 50% of MSA or County income

High income, 120% of MSA or County income or higher.

Also, a few Census tract number designations have changed, been re-assigned, or combined with other tracts since the 2010 Census.  The last of these re-assignments by the FFIEC was in 2017, primarily affecting a few tracts in Syracuse NY and Tuscon AZ.

Using CRAMap 2021, a Bank can determine what proportion of its loans and deposits are distributed among each Income area, for each of its branches and communities - wherever the bank takes deposits and/or makes loans.

For more information about the CRA, please see the website of the Federal Financial institutions Exam Council at https://www.ffiec.gov/cra/.

Unbanked is part of RPM's MarketBank™ family of predictive models describing financial services usage and potential, based upon multiple data and research sources, including the most recent FDIC National Survey of Unbanked and Underbanked Households, the American Community Survey (ACS), and selected Census data.

The MarketBank™ Unbanked model estimates the likelihood of a household to lack both a savings and checking account with a bank, thrift or credit union.  Results are estimated at the Census Block Group level, and provide communities, bankers, regulators, and industry analysts a below-Census-Tract level view of access to the first-tier financial system.  Unbanked scores range from 0 in higher income communities, to a high of 465 in lower income, distressed and/or underserved neighborhoods.  A score of 100 is average for the U.S., and a score of 200, for example, represents a tract where residents are twice as likely to be Unbanked.

Unbanked helps banks to better understand neighborhoods that lack access to banking and credit, in order to improve such access.  It is especially helpful in determining neighborhoods that are the best place to begin improving access for Unbanked households.  These are the sub-neighborhood areas that have relatively high demand and potential for deposit and loan services, and also have potential for non-branch delivery systems.

Banking regulators, examiners, analysts and the media use Unbanked to identify relatively Unbanked neighborhoods and households, and begin the process of providing them access to the first-tier financial system based on their particular needs, so that they might avoid a dependency on second tier services, including and particularly predatory lenders.

Community organizations and citizens use Unbanked to become more aware of the issue of who is outside the first-tier system, where Unbanked households live, and where to begin analysis and ultimately, advocacy - within a neighborhood.

Most of all, Unbanked establishes a community and a collaboration among all stakeholders to begin actively extending basic banking services to all American families and households.

Also based on Fed studies, the HRI describes the ability of a household to withstand a financial shock, such as those caused by the COVID-19 pandemic.  A score of 100 is the U.S. average.

A part of RPM's MarketBank product usage and potential dataset, Credit Card Line Utilization describes the extent to which households use their credit cards.  Again, a score of 100 is the U.S. average.