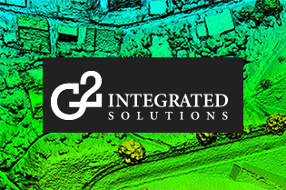 G2-IS has modified the GeoClaw kernel to allow for the incorporation of fluid density and viscosity terms. Unlike many other offerings, this enhancement enables GeoClaw to be legitimately used in modeling fluids other than water, e.g., hydrocarbons. This refined simulation capability is extremely important when the working fluid is a hydrocarbon product whose density differs from water, and whose viscosity may differ from water by multiple orders of magnitude.

The use of GeoClaw in the overland transport modeling portion of the Liquids HCA Tool enables the effective use of the high-resolution digital elevation data now available via the USGS 3D Elevation Program (3DEP) and the Esri Living Atlas. In many parts of the United States, 3DEP data is now available at 1-meter horizontal resolution. To allow the Liquids HCA Tool to take advantage of the ever increasing resolution of elevation data, G2-IS has enabled the GeoClaw engine to be run in the Microsoft Azure® virtualized computing environment. This enables nearly unlimited performance scalability in the Liquids HCA Tool, either on premises or in the cloud, a facilitates processing performance that far outstrips tools limited to desktop computing.

The combination of Liquids HCA Tool simulation algorithms together with the extreme resolution of the USGS 3DEP and NHDPlusHR datasets facilitates more accurate and detailed release plume modeling than ever before possible. The output of both the overland flow and hydrographic transport modules of the Liquids HCA Tool is fully time aware. This facilitates the user’s ability to visualize the evolution of both overland and hydrographic transport plumes through time, using the ArcGIS Pro time slider. This capability enables Liquids HCA Tool output to be used as an aid in emergency response plans and exercises.

ArcGIS Pro versions 2.8 and up.

Results are consistent, reproducible, and defendable