In the United States, flooding disasters represent some of the most costly natural hazard events in terms of both life and property loss. In just the last 20 years, nearly 60 percent of major disaster declarations made by the president of the US were for flooding events, and at least 20 of those resulted in damages in excess of $1 billion.

The present foundation for water forecasts is a network of ~8,000 stream gauges, maintained by the United States Geological Survey (USGS). Gauges provide real-time water level data that is in turn used by forecasters to predict water level characteristics upstream and downstream of the gauge. Although the existing network of gauges was methodically designed to produce the most comprehensive water forecasts, currently, only 3 percent of all US river and stream miles are downstream of a gauge (figure 1). This represents a clear service gap, especially in the case of flooding events. 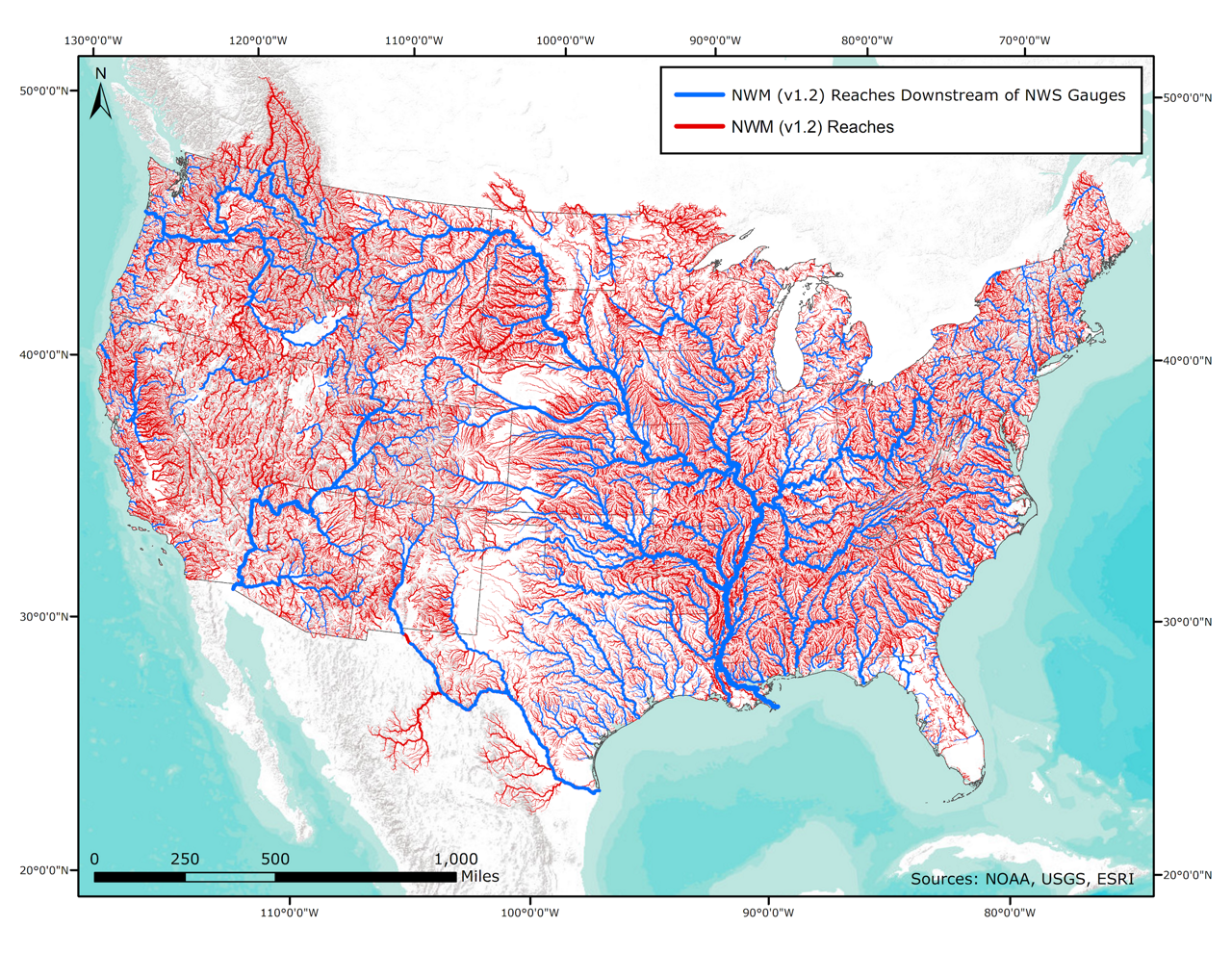 This evolution of the NWM is due in part to NOAA's partnership with Esri. Beginning in 2014, NOAA's Office of Water Prediction (OWP) collaboratively explored, with Esri engineers, the concept of an enterprise geographic information system (EGIS) that could become the engine for research and development of geospatial activities to support the NWM as well as the development of analytical data services. This would aid not only model development but also the exploration of intelligence that could be gleaned from model output. In 2016, this EGIS became a reality through the Esri Enterprise Advantage Program (EEAP) and deployment of ArcGIS Enterprise at the NOAA/National Weather Service (NWS) National Water Center. This system is in place today and includes a front-end portal as well as a set of ArcGIS Server sites. 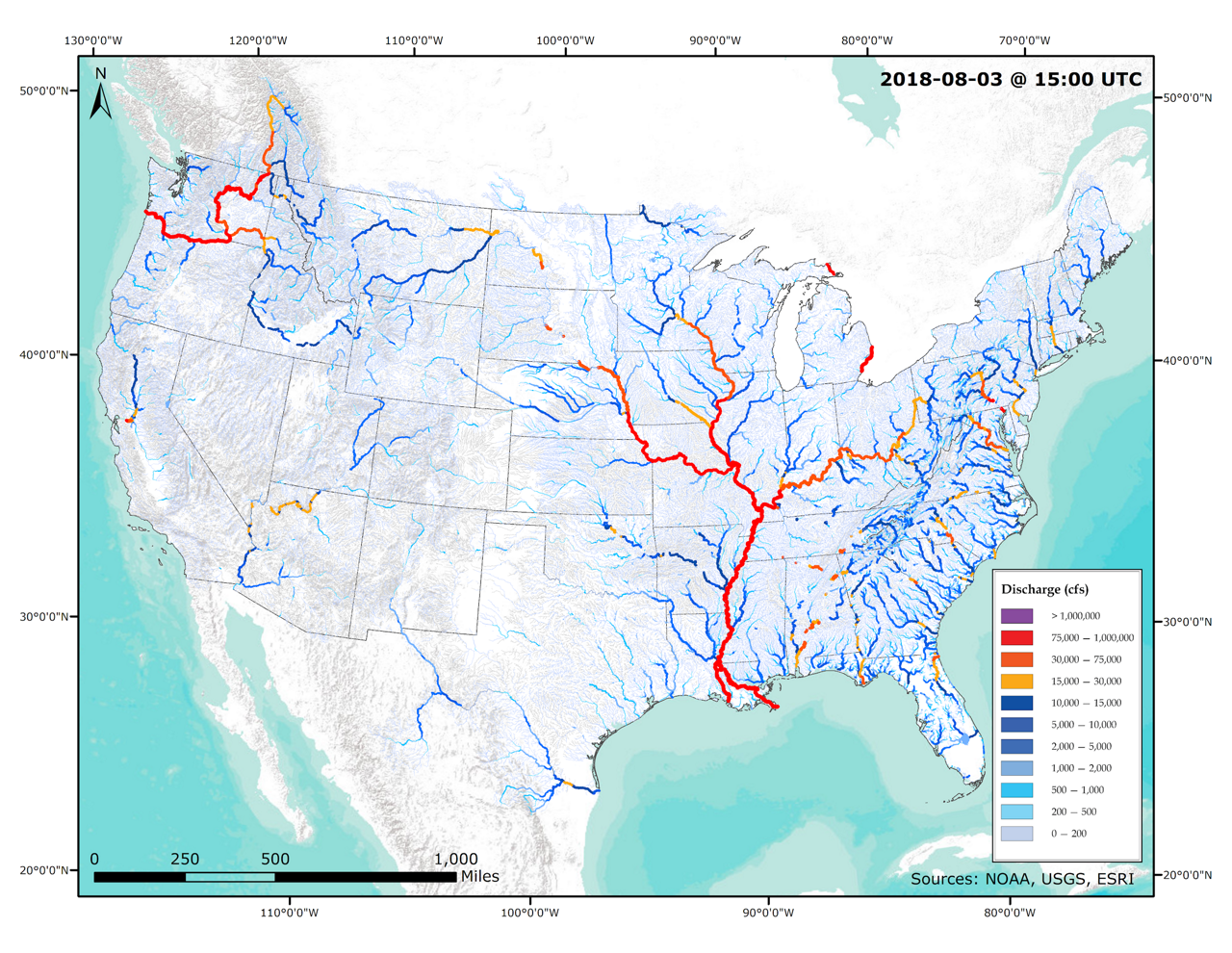 On March 6, 2018, NOAA implemented version 1.2 of the National Water Model, which builds on the success of previous versions and yields more accurate streamflow analyses and forecasts. The higher degree of accuracy is due in part to a large increase in the number of observations assimilated into the model, including an additional 680 USGS stream gauges (a nearly 10 percent increase) to help improve the model's simulation of streamflow. All told, the higher degree of accuracy delivered by version 1.2 will pay dividends for both routine water management and decision-making during high-impact events. The EGIS is being used for testing and development of experimental data services that support routine hydrologic briefings of current and forecasted water resource conditions from the NWS River Forecast Centers. The NWC EGIS is also the hub for a series of map services and web apps that place the output of the NWM in context for the end user.

Next up, version 2.0 of the National Water Model is due out in early 2019. Version 2.0 will provide first-time coverage for Hawaii, providing streamflow and other hydrologic guidance to forecasters, emergency responders, water resource managers, and others on the islands. It will also represent a major step forward in engagement with the weather, water, and climate enterprise—a key component of the National Weather Service's vision to create a Weather Ready Nation. As part of the version 2.0 upgrade, the National Water Model code will be organized into a series of retrievable libraries, making them free and open for use by those outside of the federal government. This community development approach opens the door for the creation of geographically specific, value-added, and tailored solutions that will close the gap between science and the people who need water resources information to protect and support them.

Perhaps most exciting of the emerging capabilities are the data services that convert the official NWS River Forecast Center forecasts into a set of experimental flood inundation mapping services. These demonstrative services will usher in an era of new impact-based decision support services for water prediction.

The National Model Water represents a progressive leap toward meeting the water challenges of tomorrow. Over time, and with continued partnership with Esri, the outputs from the National Water Model will continue to be used more by National Weather Service forecasters to supplement traditional water forecasts and deliver better, timelier forecasts to serve the growing needs of our stakeholders.