In September 2017, the Clay County Utility Authority (CCUA), along with many other organizations in the state of Florida, prepared for the landfall of Hurricane Irma. CCUA has 158 employees and serves over 53,000 customers. CCUA maintains 163 pump stations, 43 treatment facilities, and 1,500 miles of utility pipe. The week prior to the storm making landfall, CCUA staff worked diligently to determine the storm's path and its potential impact.

CCUA executive director Tom Morris took the storm very seriously. The year prior to Hurricane Irma, Hurricane Matthew severely impacted CCUA's service area. Morris and his staff were well aware of how devastating the storm could be if direct landfall occurred in their service area.

In the past, Morris relied on the Hurricane Storm Surge Atlas published in 1998 (shown below). The week prior to Hurricane Irma, Morris approached Daniel Johns (CCUA GIS manager) about having maps created and printed showing CCUA's facilities with overlays of the current National Hurricane Center's (NHC) Sea, Lake, and Overland Surge from Hurricanes (SLOSH) data. 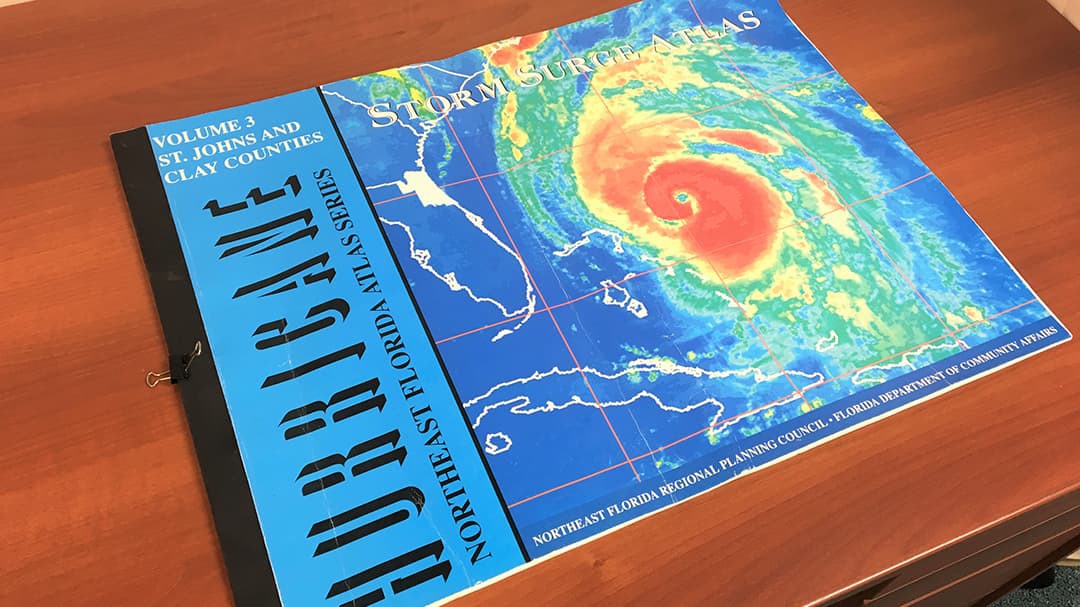 Johns suggested a slightly different approach. In place of printing maps, he proposed to use CCUA's Esri technology (Portal for ArcGIS) to host an Esri Story Maps application accessible to all CCUA staff. The new application would include SLOSH data, CCUA facilities, and NHC's Esri map service for active hurricanes in the Atlantic Ocean. This approach would require staff to use a single mapping application. Intrigued, Morris asked Johns to proceed.

Familiar with the NHC website, Johns knew where to find the necessary data and resources. Within the hour, he was able to download all SLOSH GIS data, upload it to CCUA's enterprise GIS database, share the application as a service to use in CCUA's portal, and build a story map (shown below). 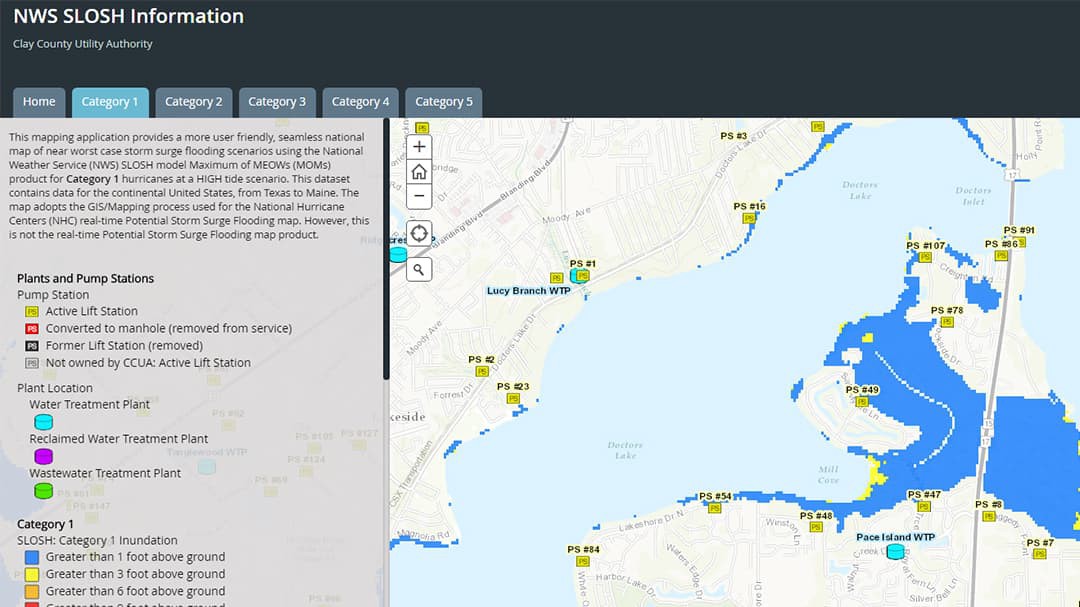 Shortly after placing the application on the portal's landing page, Johns walked Morris through the process of accessing and using the application. The new story map showed the potential impact of each category of hurricane on CCUA's facilities. Having the storm's path shown in the application allowed Morris and his staff to predict an array of scenarios showing CCUA's facilities along each projected path. Shortly before landfall, the storm's projected path was shown to travel upward along the center of the state and Clay County.

Johns sent out a brief message to all staff explaining how to access and use the story map. The application was well received and utilized before, during, and after the storm.

Although Hurricane Irma entered Clay County as a category 1 storm, the county experienced category 4 storm surge in areas around the St. Johns River and connecting bodies of water. A nor'easter entered Clay County immediately before Hurricane Irma and contributed to the historic flooding not seen during Hurricane Matthew. Staff completed damage assessments of all CCUA facilities (shown below) immediately following the storm. Photos taken at flooded facilities were then compared against the story map's surge projections. The application also contributed information for reports and assessments submitted to the Federal Emergency Management Agency (FEMA). 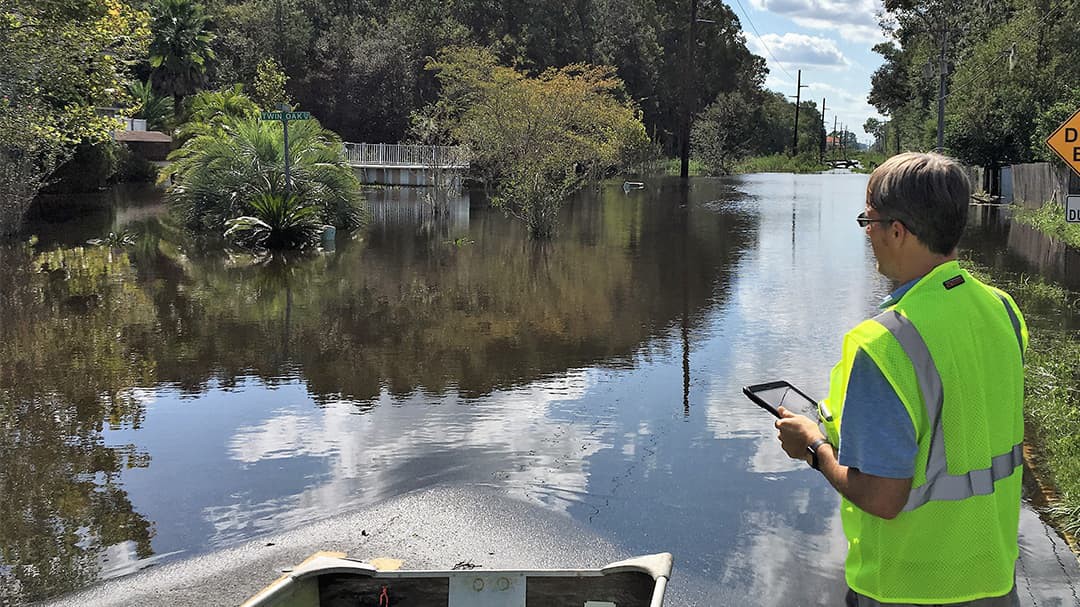 Following Hurricane Irma, the tropics remained active. Staff continued to use the application to monitor storms and potential storm surge (shown below). With little time investment, the story map brought immediate value to the organization and its operations.

The organization also had the benefit of responding quicker to future situations and now can publicly share the map with outside organizations if needed. 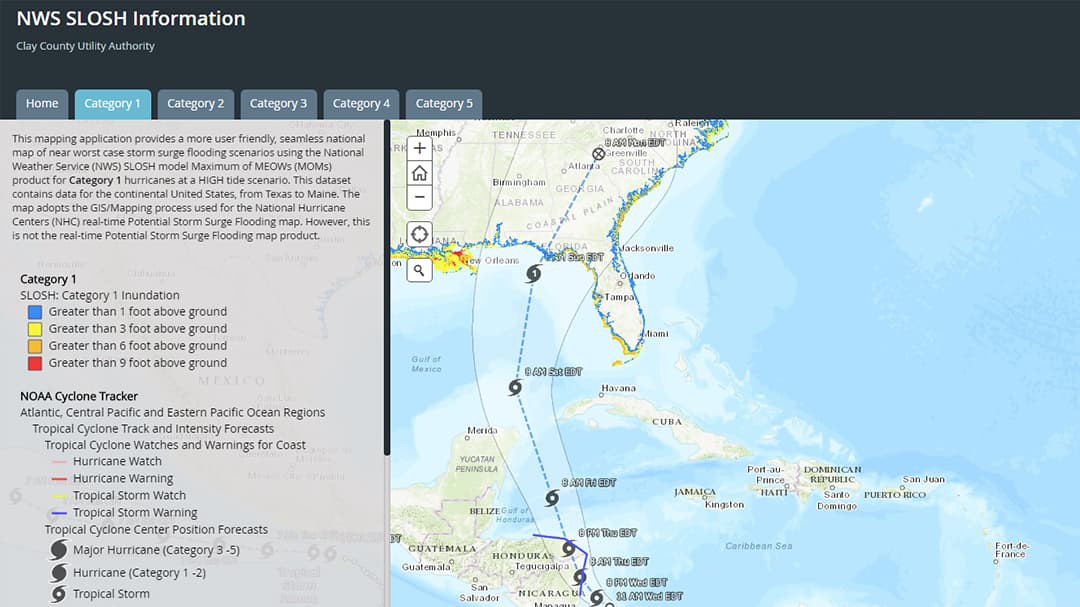 Staff continued to use the story map application after Hurricane Irma.

Build your own story map