When the Flint, Michigan, water crisis surfaced more than four years ago, Fort Worth's water utility—like many of its counterparts nationwide—admittedly didn't have complete records when it came to knowing how much lead pipe was still in use in the city.

It's long been Fort Worth's policy to replace lead service lines when a water main was replaced or found in the course of other work. This policy resulted in numerous replacements over the years, but in the past, city crews and contractors were not required to document where and when they made these replacements. It's believed that in some years, as many as 400 lead service lines were taken out of the ground.

Fort Worth knows that, as recently as two years ago, about 1,600 lead service lines remained on the city's side of the meter. Of those, about 1,200 lines had been found since crews started walking from meter to meter to survey and collect GPS data for Fort Worth's new advanced metering infrastructure (AMI) program. The remaining 400 lines had been identified by field operations staff who were doing other work.

The inner city—the oldest parts of town, and where most of the lead pipe was thought to be—is 97 percent surveyed. Citywide, the review of the service lines is 70 percent complete. Service lines that remain unchecked are mostly in areas where development occurred long after lead pipe was banned by the 1986 Safe Drinking Water Act.

"One of the biggest [challenges] to an accurate risk assessment is to have good data," said Chris Harder, Fort Worth's water director. "So obtaining the data to quantify what our risk is on this is important."

Fort Worth has a goal to replace all lead service lines by the end of 2021. Esri ArcGIS mapping and data collection technology has enabled crews to work so much more efficiently that achieving that deadline is well within reach. Esri's Operations Dashboard for ArcGIS gives a true picture of how the lead service line work is progressing, and it calculates the anticipated completion date.

The Environmental Protection Agency (EPA) has recognized Fort Worth for its lead removal efforts. The EPA website features the city alongside 16 other communities that have lead removal programs. 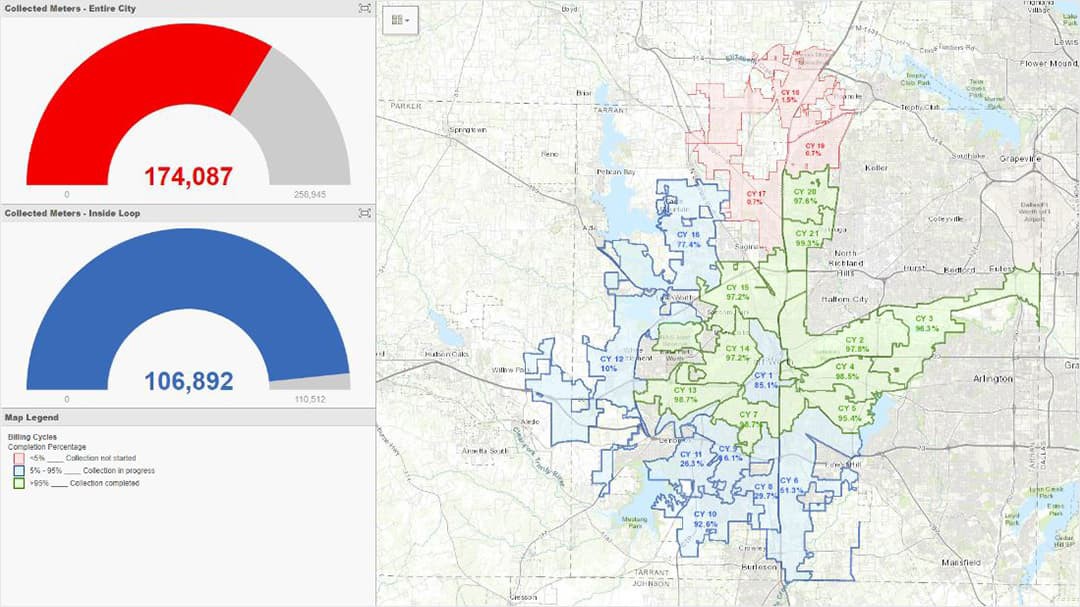 About three years ago, the water utility embarked on a project to collect the GPS coordinates of more than 260,000 water meters. This was done to support the newly implemented AMI program. Utility administrators saw this as their chance to finally identify where lead service lines remained. Identification of the service line material could be done in conjunction with the data collection. Fieldworkers could take a few minutes to scrape the service line on both sides of the meter and report whether it was lead.

Remarkably, only 15 lead service lines on the customer side of the meter have been found. Crews have found considerably more lines made of galvanized steel. 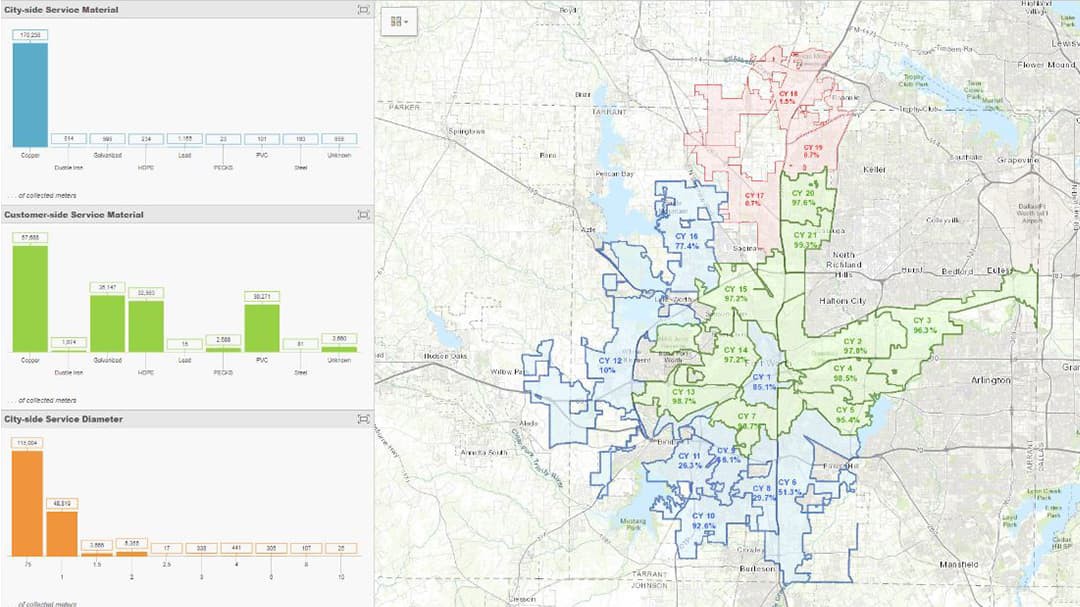 Fort Worth has gained far more than meter data, said Homer Garza, Fort Worth's water utility IT manager. The utility's staff have corrected billing discrepancies and now have new levels of data analysis at their fingertips, he said.

"As mapping software got more efficient, we started mapping mains, service lines, hydrants, valves, meters—all these other details," Garza said. "All these assets are tied together in a network. Your analysis capacity increased. Instead of just having assets mapped, you can see the relationship of assets with each other. If you were to close a valve, you would see the impact to the rest of the system."

Field operations, for example, can see exactly where a meter is located and what materials are there, allowing staff to bring the right equipment and eliminating the need for return trips to the warehouse. It also cuts down on the time it takes workers to find a meter on a property.

The information is available to other city departments as well. That includes Transportation and Public Works, which can better coordinate road improvement projects with planned water and sewer work.

Divisions within the water department make good use of Operations Dashboard for ArcGIS capabilities.

"The dashboard shows you the progress and displays the areas where data was collected," Garza said. "It also displays progress based on the previous 60 days' collection, and based on that rate, it projects an ending date. That right there has given supervisors a method to see what they're up against in their progress."