Green Stormwater Infrastructure (GSI) is a solution for highly urbanized communities, allowing them to reduce storm water flow volumes and mitigate pollutants. Correctly estimating the contributing drainage area is key to designing a well-functioning GSI. To aid in delineating contributing drainage area of GSI in an urban landscape, a workflow was developed. Unlike drainage area delineation in undeveloped areas, urban areas are subject to microtopography (i.e., curbs, sidewalks, or buildings) and storm water infrastructure (i.e., inlets, gutters, or GSI) that alters the flow of runoff. This comprehensive workflow for urban watershed delineation incorporates GSI, buildings, and inlets by altering the digital elevation model (DEM) to make these features part of the hydrologic landscape.

Drainage area is the quantification of area draining to a single point. While a lot of work has been done on drainage delineation and GSI, there still is a lack of consensus on the best method for drainage area delineation in urban areas. Sites may report different drainage areas depending on the method applied to estimate the drainage areas and the resolution of the data used. Drainage areas may be estimated using AutoCAD drawings or physical surveys done during a storm event. Both methods have challenges and sources of error, such as time and information requirements.

This delineation workflow provides an automated process created in ArcGIS to find the drainage area efficiently and accurately. Raster data used for this analysis includes topographic data on a range of scales, shapefiles of buildings, inlets, and GSI. The input topographic data for this study ranges from fine scale (1-foot resolution) to coarse scale (10-foot resolution) from lidar-derived DEMs, publicly available DEMs, and DEMs derived from contours. The case study for this workflow is a GSI site with two rain gardens connected by a grass swale in South Philadelphia, Pennsylvania. This site was developed by the Philadelphia Water Department (PWD) and instrumented and analyzed by Villanova University as part of an Environmental Protection Agency (EPA) Science to Achieve Results (STAR) grant. This analysis represents part of a much larger investigation into GSI. The entire procedure for this analysis can be divided into three phases: preprocessing of DEMs, flow analysis, and basin analysis. 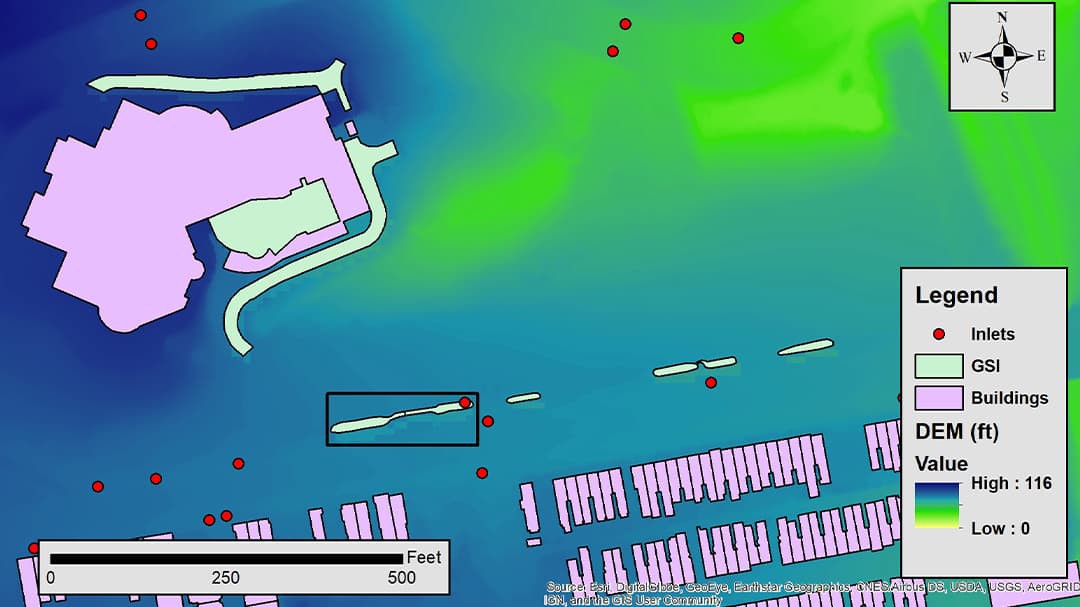 Figure 1: The GSI Site with All the Infrastructures Overlaid on the 1.9-Foot Grid Resolution DEM

The DEMs were processed to eliminate sinks and peaks in the data by using the Fill tool. The storm water inlets and GSI features were buffered to match the size of storm water features. Then the elevations of the inlets, GSI, and building infrastructure were added to the attribute tables. The infrastructure shapefiles were then converted to raster, using the Feature To Raster tool.

The new raster infrastructure files were then integrated with the depressionless DEM. The Plus tool was used to add the height of the buildings, and the Minus tool was used to lower the inlets into the DEM. Curb cuts and GSI were sunk into the lidar-derived DEM. All the outputs obtained using these tools were then merged into a single raster, using the Mosaic tool.

The mosaicked DEM was used to analyze flow direction for each cell by with the Flow Direction tool, then reprocessed to assign an accumulation value based on the flow direction, using the Flow Accumulation tool. The detailed flow lines obtained from higher-resolution DEMs incorporate the microtopography in the urban landscape, as shown in figure 2. In contrast, the flow lines of the lower-resolution DEMs show fewer flow lines running into the nearest GSI and storm water inlets, resulting in a decrease in flow lines with an increase in the grid size of the DEM. 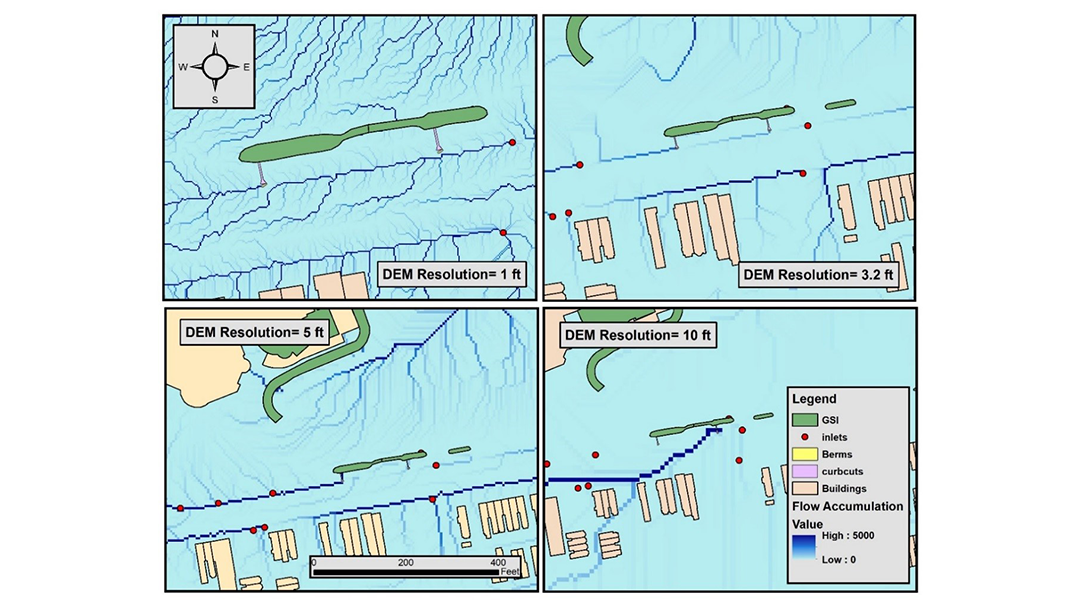 Using the Spatial Analyst tool Basin, the sub-basins of the GSI and inlets were produced. These files were converted to feature polygons. The Flow Path Tracing tool of Arc Hydro helped trace the upstream sub-basins and storm water inlets, which allowed us to identify the sub-basins draining to the GSI. These sub-basin polygons were exported and the total drainage area was calculated in the attribute table. 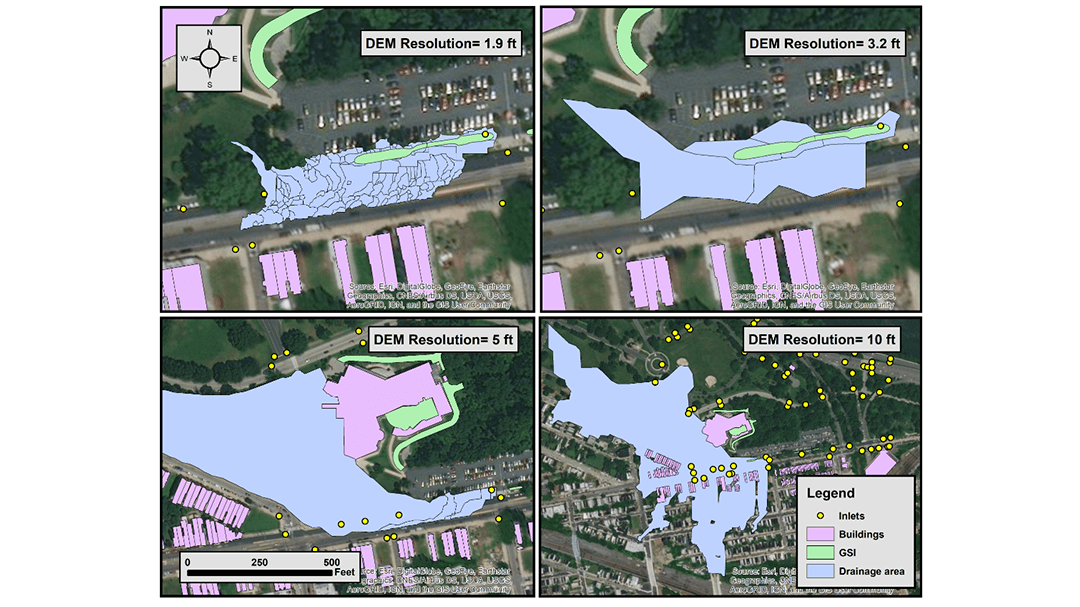 Questions can be sent to Virginia Smith, Virginia.Smith@Villanova.edu

This publication was developed under Assistance Agreement No. 83555601 awarded by the U.S. Environmental Protection Agency (EPA) to Villanova University and the Philadelphia Water Department (PWD). It has not been formally reviewed by EPA or PWD. The views expressed in this document are solely those of Villanova University and do not necessarily reflect those of the Agency or PWD. EPA or PWD does not endorse any products or commercial services mentioned in this publication.