Established in 1962, Camrosa Water District encompasses an area of about 31 square miles in the southern portion of Ventura County, California. The district serves more than 35,000 residents, more than 3,000 acres of agriculture, and a host of business and light industry. District staff manage three distribution systems: potable water, nonpotable water, and a sewer collection system.

Camrosa Water District staff operated with disjointed workflows that were cumbersome, antiquated, and inefficient. Additionally, there was no unified method to track progress and pass critical data in and out of the field. This led to data fragmentation, communication breakdown, and a very reactive posture. The district needed to identify a way to solve these problems. The overall goal was to become proactive and take back control of its assets.

Bottom line—Implementing ArcGIS has revolutionized how we do operations! In the first year alone, we were able to complete 50 percent more work with almost no additional investment. We now have the tools to accurately plan, track, and assess operations in real time, and this translates into real dollars saved. 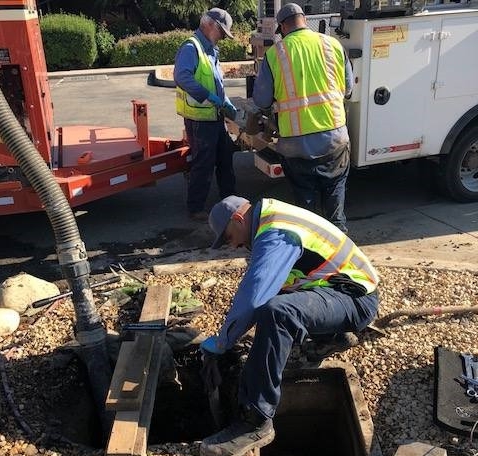 The geographic information system (GIS) team led the development of five different mobile apps utilizing Esri's ArcGIS Online out-the-box capabilities (e.g., Collector for ArcGIS). This was accomplished with lightning speed as design, development, and implementation took only a few weeks. These apps were then later consolidated into a single seamless field-friendly app. Built on top of Esri architecture, this app acted as the primary user interface between field operators and GIS databases. Because so many other databases could be tied into the GIS, this methodology gave unprecedented real-time access to previously unavailable data in the field. In addition to the obvious location information, operators now had the ability to retrieve asset maintenance history and, perhaps more importantly, as-built blueprints from the engineering department. The success also worked conversely, as now operators had the ability to capture and push critical maintenance information from the field into local databases. In addition to improved record keeping capabilities, management had an appropriate tool to track progress and better plan resource allocation.

Implementation of GIS-based solutions proved to be the key tool that led to several improvements across the organization including putting real-time data in the field, improved record keeping, improved communication between field and office staff, key performance indicator (KPI) tracking, and the ability to quickly assess results. In the end, workflow was drastically improved and asset management enhanced. This, in turn, allowed the creation and execution of a robust preventive maintenance plan that saved time and money—in short, the district became much more efficient. How much more efficient? It was concluded that 8 percent of the budget was saved, and 50 percent more work orders were completed!

Get started with mobile apps