The geographic information system (GIS) department at Bonneville County, Idaho, began as a single-person operation. It has since blossomed into a six-person, cross-functional department that has elevated GIS from the back office to a position of leadership in county governance.

With a total population of 115,000 people and limited resources, the county is reaping the benefits of a thriving GIS department. Its staff is now admired by their peers across local government.

The department assists in all GIS-based activities across the county governmental systems while also managing the collection and maintenance of geographic datasets used throughout Bonneville County.

The Esri Professional Services team has been there since the beginning, providing strategic support for the Bonneville County GIS department every step of the way. The tight-knit relationship has been integral in helping to guide transformational growth in the county's success with GIS.

Building a New Level of GIS from the Ground Up

The road to success for Bonneville County's GIS department was a long, steady, and—at times—arduous one. Until 2015, the department was using a legacy system that presented challenges in the face of various IT and data requirements.

The promotion of Trich Maupin to the new GIS manager role in 2015 signaled that change was on the horizon for the county. The department had just two dedicated staff members supporting Maupin, who was responsible for the management of all of their GIS functions and responsibilities.

Maupin recognized that there was not a true understanding of what GIS could do for the county. As a result, there was a lack of support and buy-in for the technology from county managers and commissioners. She jumped in with both feet and began to strategically engage and educate county commissioners about the urgent need for a modernized GIS. At the same time, she was focused on expanding the county's relationship with Esri Services.

Maupin recognized that Bonneville County could benefit from the increased level of support and guidance from the Esri's Advantage Program. This would provide strategic advice, planning, and best practices from a trusted adviser and subject matter experts—along with more access to tailored training and consulting—to help Maupin's staff steadily grow GIS across the organization.

Maupin began to have regular conversations and meetings with Esri. Oftentimes, she knew exactly where her department needed to go to make big things happen. What she didn't know was exactly how to get there. The dedicated Esri Advisor worked with her to provide the validation, guidance, and insights to help get Bonneville County where it wanted to go.

The growing collaborative relationship between Bonneville County and Esri would prove to be fundamental in connecting new solutions and technology with Maupin's vision—to take Bonneville's GIS to the next level.

One of the first turning points came in 2016, when the county assessor suggested that Maupin include a potentially influential voice in their first session of onboarding to ArcGIS Online with members of Esri Services. The GIS department took advantage of the Web GIS Launch Kit, providing expert-led consulting that would enable staff to deliver maps and apps to more of their organization.

"It's kind of neat looking back at it, from some of the best practices of finding a champion. That's what we did. We looked at the county's newly hired software manager as our perfect opportunity—as a champion to voice what the GIS department can do," said Maupin. "So I brought him right into our Esri onboarding and showed him what was possible, and how powerful ArcGIS could be for us. That experience really opened this influencer up to seeing what GIS could do. He became a fantastic champion by my side, to help promote to our commissioners to the other departments of what we were capable of."

Inside the offices at Bonneville County, the staff's perception of the true value of GIS gradually became clearer, in direct correlation with Maupin's leadership. She continued to educate decision-makers in the county assessor's and commissioner's offices on the potential value and benefits of a robust platform.

At the same time, Maupin was gradually growing her department's geospatial functions and head count. To be truly successful, the GIS staff members needed to continue to develop their capabilities to capture, visualize, and analyze reliable, authoritative data that they could produce quickly to inform local residents.

"One of the neat parts about our meetings with Esri Services is that we were able to say, 'Here are my goals I have laid out for the year that I want this department to accomplish," said Maupin. "And then our Advisor would walk us through the ways that Esri staff can support us in pursuing those goals and getting these objectives accomplished."

Soon the GIS department was notching wins by using its enhanced GIS technology and guidance from Esri Professional Services to overcome new challenges. They were recognizing longtime pain points in local governance and providing new solutions to help alleviate them.

One particular challenge would prove to be a difference maker for Maupin's growing staff.

The GIS department knew early on that the county landscape was susceptible to wildfires. The staff worked to adopt and implement new GIS tools and applications for Bonneville County's emergency services department, which encompasses management, preparedness, mitigation, and—especially—response operations.

In 2016, the Henry's Creek Fire struck Bonneville County. It remains the largest wildfire in recent memory, and the governor declared a state of disaster in Idaho. Remarkably, homes were saved by local fire departments that utilized critical information on the at-risk structures and parcel ownership with the information that had been provided by the GIS analyst on Maupin's team. However, the region's cattle farmers and wildlife were severely impacted by the disaster.

The fire presented an opportunity to put into play the progress the GIS department had made by testing and developing new solutions for fabricated wildfire scenarios, in collaboration with the team at Esri.

"I told the team, this was that true game-changing moment for us where we can shine and show what we can do, given the better data and solutions we had," said Maupin.

It was a transformational step for the GIS department and would ultimately serve as the foundation for the county's new emergency preparedness and mitigation strategy for public safety. 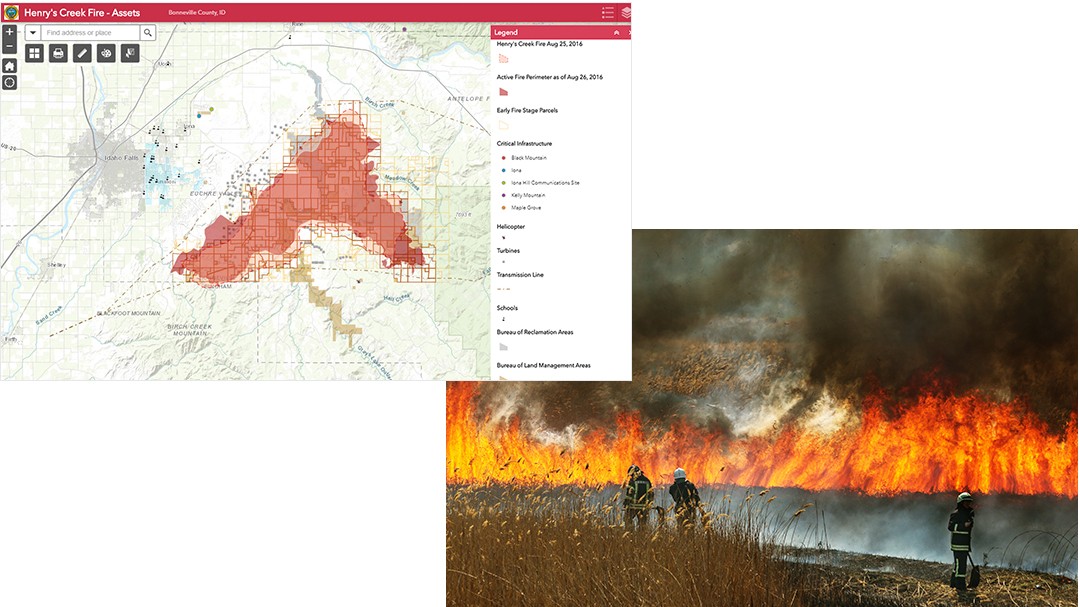 The GIS team was able to quickly create interactive maps that gave agencies an enhanced level of situational awareness and location intelligence.

"We took the data layers we had been working on, put them online, and started building and promoting different web maps. We started feeding that to all of our different departments," said Maupin. "The county emergency manager at the time had me come into one of their emergency preparedness meetings, where we pulled up Esri's hot spots fire map. We were able to show where the hot spots were and where the fire was starting to grow. That presentation was a real powerful 'wow' factor for our commissioners—to see all of that hand in hand with that wildfire."

Showcasing what was possible with GIS opened the door for Maupin's staff to work with other departments as they recognized how location technology could be a powerful tool for all components of emergency management.

"As a result, the county commissioners with the new budget line decided that GIS could no longer remain under the assessors. It was too powerful of a resource for all of the departments in the county, and it needed to be migrated to its own department under the commissioners," said Maupin. "And so we were transitioned from the assessor's office to become a full-fledged independent department under the commissioner's office. And that was, for the most part, thanks to the quick response in the GIS technology for the wildfire in 2016."

Another opportunity to showcase the potential of GIS presented itself in 2017, when the total solar eclipse made Idaho a destination for tourists wanting to position themselves in the direct line of sight. In anticipation of the flood of tourists, the GIS department created its first data dashboard and accompanying story map to support the major event. The new ArcGIS Online tool for the county's emergency management personnel solidified buy-in from the county commissioners.

"The eclipse was another one of those powerful moments for us to do a quick showcase of what we can do. And we had this capability because of our Esri Advantage Program. At that point, we were able to create new solutions and provide them through ArcGIS Online because of the work we had done building it through that program," said Maupin.

Adoption of GIS has grown substantially during Maupin's tenure leading the department. This has included the GIS department's move into Esri's Managed Cloud Services environment, successfully streamlining staff's IT functions.

The Esri Services team has been an integral part of the department's transformation, helping Bonneville County reach its level of success with GIS.

"The ability to utilize Esri's Managed Services has made our relationship priceless," said Maupin. "It's allowed for us to have that cloud environment, and so it has absolutely been an invaluable part of our progression as a GIS department, in my opinion."

The challenges overcome and successes realized by Maupin's team year after year have secured increased buy-in from decision-makers throughout Bonneville County government. Today, nine other departments depend on Maupin's staff for foundational GIS mapping services. They have increasingly become an integral part of many different governmental functions, including emergency services and enforcement, elections, property assessment, road construction and maintenance, and land use and zoning.

“…we would have had a much larger struggle without support from Esri Services. The team has provided us with the tools and resources to help put the right information in front of my board of commissioners.”

The coronavirus disease 2019 (COVID-19) pandemic presented the opportunity to fast-track the ArcGIS Hub software-as-a-service offering, which the county's GIS and planning departments were evaluating for use later in the year.

When the outbreak threatened Idaho, Bonneville County's commissioner requested that a new emergency response solution be deployed by the next day.

"There is no end to the benefits of a GIS champion. The other big part is the importance of communication with the commissioners. It opens up that door for them when they walk through situations," said Maupin. "Case in point is our COVID-19 situation. They were having emergency meetings and the commissioner said that we need to have the GIS department involved and on these calls. This was due to informing him that we were looking at making a hub. We asked if this may be something we could do for COVID-19. And then it was an instant hit."

The resources available on the hub site include an interactive map of confirmed cases and fatalities statewide, organized by county, as well as a story map, titled “Facts, Misconceptions, and Myths”. The hub site also provides users with critical information and resources, including official communications from local government leaders and partner agencies, daily public health reports, a video feed of the governor's public addresses, and guidance for residents.

With over 25,500 views to date, the hub site has proved to be a tremendously valuable resource, keeping local residents well-informed and safer against the threat of community spread.

It is just the latest example of the ways in which Bonneville County's GIS department is using Esri's advanced technology to enhance the effectiveness of fellow departments and countywide operations—all to the benefit of local residents.

"Looking back, we would have had a much larger struggle without support from Esri Services. The team has provided us with the tools and resources to help put the right information in front of my board of commissioners. Having a sounding board available to us at any time has been a huge help for Bonneville County," said Maupin.

Find out how Esri Services can help your business