Accelerating a Digital Future for the Power Industry

Elvia is one of the largest electricity network companies in Norway, providing power to nearly two million people. It does so through building and operating approximately 28,000 distribution transformers while maintaining all overhead lines and cables that span the region.

Elvia's vision for the future centers on digitally transforming those distribution transformers, which will ensure a more stable power supply and also help keep grid costs as low as possible.

Elvia is constantly testing new, smart technologies to help it achieve its future vision. A primary grid modernization initiative involves expanding its use of smart sensors, which it is doing with the support of CINELDI, one of Europe's largest research centers for intelligent electricity distribution.

Elvia manages a wide range of highly diverse power grid assets that are naturally subject to excessive loads and challenging environmental conditions, in addition to normal wear and tear. Risk factors such as thermal or electrical breakdown, or even fires caused by overheating, can result in widespread power failures and outages for customers.

Regular and comprehensive monitoring of all power equipment across the grid is critical. Routine periodic inspections can find and document serious issues, such as frayed conductors, degraded insulation, moisture, and evidence of overheated components. However, utilities normally do not have a real time view of equipment temperature.

Ad-hoc temperature checks are often expensive and time-consuming, which leads to their not being performed on a regular, consistent basis—as may be needed.

"The standard tools we have in our toolbox only measure the temperature in one location, at a single point in time," said Åshild Vatne, research and development adviser, smart grid initiative at Elvia. 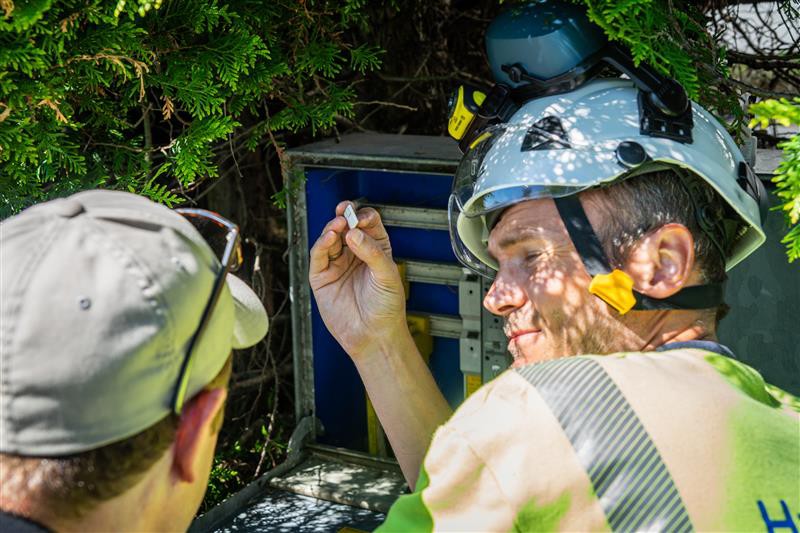 Challenge
Elvia needed an easy way to monitor all power equipment across the grid on a regular and comprehensive basis.

Results
The combination of wireless smart sensors and the ArcGIS platform is enabling Elvia to visualize and analyze all conditions in real time which has significantly reduced previously required emergency repairs, which are typically more expensive than the routine, planned maintenance.

The size of a postage stamp, these wireless sensors are being placed on Elvia power equipment to continuously monitor asset heat signatures in real time. They can be strategically positioned in small surface areas that are normally difficult to access, and they do not require a direct line of sight. With a battery life of up to 15 years, the sensors do not require manual maintenance and yearly calibration.

This new system is helping establish baseline asset performance indicators, and it alerts inspectors and managers when temperatures reach a predetermined variance outside of standard operating levels.

"The strategic focus on a new smart grid is bringing together all kinds of sensor data," said Kjetil Nymoen, solution architect, IT strategies for energy technology at Elvia.

The real-time data now feeds directly into ArcGIS, where it is aggregated, synced, and visually presented in context with other location-based information, providing a comprehensive common operating picture of activity across the power grid.

"With the new, integrated GIS system, people don't have to use 10 different applications. They now have one map and can visualize what's going on right there and then," said Vatne.

If unexpected temperature changes occur in any of the grid components, the new system triggers alerts to the service team for further investigation.

"If we see an increase in temperature and no increase in load, we can easily detect that something may be wrong, and we can go out and fix problems right away," said Nymoen.

Elvia has expanded its rollout of smart sensors from an initial plan of 20 up to 2,000. The company is adding them to transformers and switches from over 100 different power substations.

In addition to temperature sensing, the Elvia team is also testing the sensors for a variety of other use cases, including

•       Leak detection, providing an early warning of underground flooding so as to avoid the need for pumping, which can be expensive and dangerous for workers.

•       Proximity sensors on transformers, which indicate when they must be cleaned, and on entryways, which ensure that doors stay closed, effectively lowering security risks. 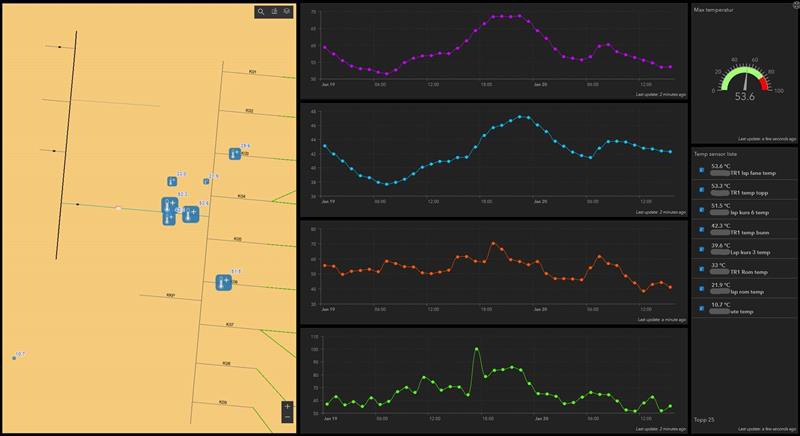 Almost immediately, the new smart sensor solution began providing Elvia with impressive results. The company has been empowered by its new location intelligence capabilities, which are strengthening communication, collaboration, and distribution of real-time asset data with the team in the field.

The combination of wireless smart sensors and the ArcGIS platform is enabling Elvia to visualize and analyze all conditions in real time. Staff can quickly identify any unexpected changes in baseline asset performance indicators before they evolve into more serious problems. This new, proactive approach has significantly reduced previously required emergency repairs, which are typically more expensive than the routine, planned maintenance.

For example, using traditional manual assessment methods, the service team had determined that a circuit breaker wasn't in critical need of repair. However, after reenergizing it, sensors indicated that the temperature was increasing more so than anticipated, and the breaker was in danger of failing. The new remote monitoring system triggered an immediate alert to members of the operations team.

With this information, the team quickly focused on the part of the equipment generating the spike in temperature and easily identified the root cause. Despite the fact that the breaker had initially passed the manual service check, the team decided to change the entire breaker, based on the new insights provided by the network of smart sensors. 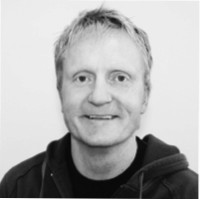 Consistent service is always the ultimate goal, with GIS, we are creating a better customer experience; and if we're able to prevent an outage, that's huge."

See how
opens in new window