Situated on Florida's Atlantic coast, the Utilities Commission of New Smyrna Beach (UCNSB) has been providing residential and commercial customers with electric, water, wastewater, and reuse water services for over 50 years.

When UCNSB's transmission and distribution (T&D) assets were installed in the 1970s, the utility's as-builts were recorded in CAD software. In 2014, UCNSB converted its CAD drawings into geographic information system (GIS) features and the organization's field teams began using the GIS maps on routine fieldwork.

It soon came to evidence that the CAD as-builts' records did not match the locations of the assets in the real world. Actual locations could be "so far off, it makes your head spin," as a fieldworker described the situation. The teams in the field found themselves spending time both trying to locate the assets and redlining paper maps for the office team to update the GIS.

"In some of the markups, you can see that a transformer pad is just not where it's supposed to be," UCNSB GIS analyst Kenneth Klopp said. "It could be a hundred feet that way, down the road, or on the other side of the street."

Original as-built records from CAD drawings, when transferred to GIS, did not accurately reflect the locations of assets in the real world.

Eos Positioning Systems is an Esri Silver partner based in Canada. Eos is the leading manufacturer of Bluetooth Global Navigation Satellite System (GNSS) receivers that are fully compatible with any Esri mobile app. Eos Arrow Series GNSS receivers are capable of providing real-time submeter and centimeter accuracy to any iOS, Android, or Windows device.

Klopp wanted to reduce the time field staff spent on trying to reconcile old CAD drawings with the real world. The best solution would be to map the real locations of all assets. Fortunately, he had room in the budget for new GPS data collection systems. But before making such a purchase, he had to make sure the technology was easy to use.

"If it doesn't work fast, the field crews are going to be reluctant to use it," Klopp said.

Klopp decided to evaluate an Eos Arrow Gold GNSS receiver in his quest for a remedy to solve his problems. The Arrow Gold was compatible with the Florida Department of Transportation's free real-time kinematic (RTK) network, which would provide centimeter-level accuracy in real time. He paired the Arrow Gold receiver via Bluetooth with an iOS device running ArcGIS Collector. The time for the field test had come.

"The Arrow Gold and ArcGIS Collector combination proved to be extremely easy to use, plus it had centimeter accuracy right on my iPad," Klopp said. "I tap on the app's Submit button, and the updated asset location is instantly live in ArcGIS Online." 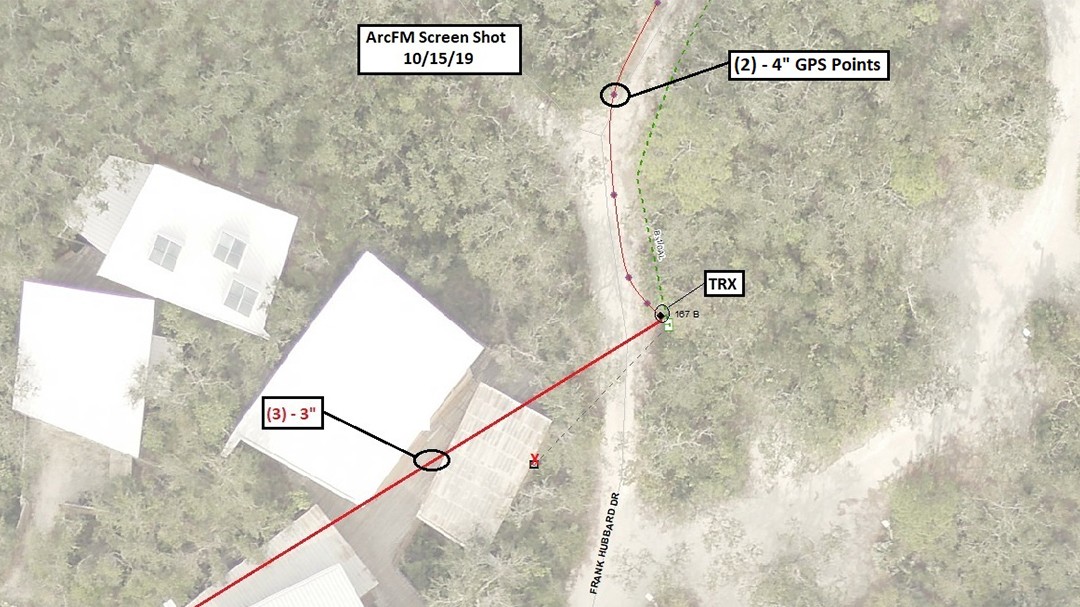 UCNSB acquired two Arrow Gold receivers for the field teams to use with ArcGIS Collector during their routine work. According to Klopp, fieldworkers have immediately adapted to using the technology and even developed some passion in updating their old asset locations.

After the features are updated in the field and synced with ArcGIS Online, a data editor in the office performs a quality control check. Then the new data is merged into the production GIS database and made available to all. The turnaround time for the entire process is usually less than a day.

"I'm glad we have a chance to use this new field data collection system," UCNSB electric installation inspector Stuart Hughes said. "It sure beats our old workflow, which consisted of tape measurements, lots of pictures, and [a] tremendous amount of time spent in the field making sketches to be turned in for interpretation and corrections."

UCNSB has extended the use of the new system for the verification and correction of the utility's entire asset database. The result will be a highly accurate digital twin that reflects the true location of all transmission and distribution assets. By having the accurate digital twin, routine field operations will be more efficient, and the UCNSB field crew will be much more satisfied.

"Being able to get on top of our asset locations is a huge benefit," Klopp said. "The field guys are happy with the new technology, and we're no longer settling for what we can consider good asset location [information]."

"The Arrow Gold and ArcGIS Collector combination proved to be extremely easy to use, plus it had centimeter accuracy right on my iPad. I tap on the app's Submit button, and the updated asset location is instantly live in ArcGIS Online."