In 2016, in response to the Zika outbreak in the Americas, the District of Columbia Department of Health (DC Health) substantially increased its mosquito monitoring activities throughout Washington, DC. To identify where disease-carrying vectors live and breed, DC Health turned to technology to improve how it targeted at-risk populations. Geographic information system (GIS) technology was used to assist the arboviral team in its surveillance and mitigation of the mosquito population in support of public health. GIS concepts were used to inform the location, spatial relationships, and the environmental and social issues associated with the areas potentially harboring harmful, virus-carrying vectors.

Early detection is the key to preventing the spread of the disease. DC Health, which is responsible for the investigation and control of reportable diseases within the District of Columbia, works alongside many departments and agencies to test mosquito populations to prevent potential outbreaks.

One of the ways that DC Health collaborates with other agencies is to test mosquito populations for Zika and West Nile viruses by trapping mosquitos throughout the eight wards of Washington, DC. It also partners with the Department of Defense (DoD) to actively share and combine its data with the data DoD collects at Joint Base Anacostia-Bolling (JBAB) and six other DoD sites, creating an extensive map of the mosquito species found in DC as well as their arboviral burden. A recent challenge faced by DC Health was not being able to place mosquito traps in areas administered by the National Park Service (NPS). These areas not only represented a gap in its current surveillance efforts but also included many of the ideal trap placements sites within the district. The analysis of mosquito populations is incomplete and less useful without trap data on sites administered by NPS.

Solution
By working on NGA land and showing its success through a GIS perspective, DC Health could make federal officials aware of the need for working on federal land. Survey123 showed the inefficiencies of using the larvicide-only program

Results
By integrating GIS into its work and presenting a geographical perspective, DC Health gained the cooperation of NPS. It also invested in higher quality larvicide due to anticipated success with the use of Survey123.

Another challenge was NPS's restrictions on mosquito control methods. The most effective method of controlling mosquito populations is with the combined application of an airborne adulticide and a larvicide at sites with standing water. However, due to district and NPS environmental and health concerns, DC Health is limited to using only larvicides. In the past, manual mapping and tracking of thousands of water basins where larvicide had been applied were difficult to keep updated and often resulted in inaccurate data. Since the larvicide being used was only effective for a month, DC Health staff often found themselves having to repeatedly perform the treatment process and data collection.

DC Health was in desperate need of a more efficient method of mapping and storing data, as well as an effective way to gain the cooperation of NPS.

The first step in collaborating with NPS began when DC Health formed a relationship with the National Gallery of Art (NGA). This was significant because NGA allowed DC Health to place traps and operate near the national mall. DC Health used Esri's ArcGIS Online—a software-as-a-service (SaaS)mapping platform—to collaborate with NGA, plan the placement of mosquito traps, and share the measurement results. This work caught the attention of several influential staff at NPS and opened the door to a less restrictive mosquito trapping project with DC Health.

DC Health is also starting to use Esri's Survey123 for ArcGIS—a mobile, form-based mapping system included with ArcGIS Online—to collect more information that addressed the inefficiencies of the larvicide-only program. This app made it easier for fieldworkers to accurately gather information at data collection locations and automatically share that information back to ArcGIS Online, where analyses are performed and maps are created then shared with all collaborating agencies. This will be launched at full scale next season. 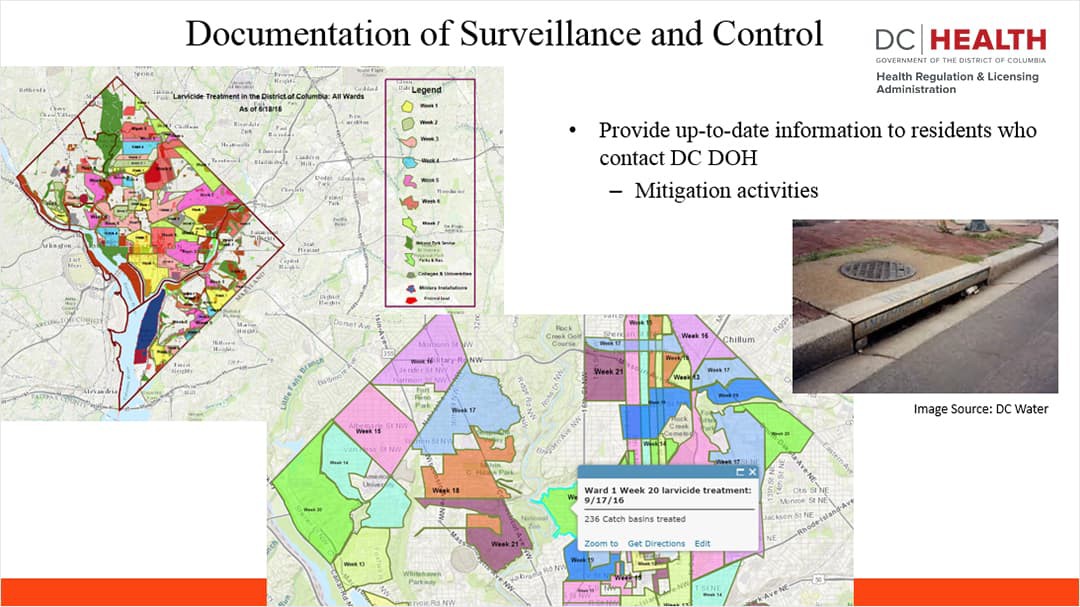 The success of the DC Health and National Park Service collaboration resulted in improved mosquito data gathering in the District of Columbia. Trap sites and mosquito breeding grounds were accurately mapped. NPS permits helped DC Health evenly spread the mosquito traps across the district, which led to a more thorough reading on mosquito populations and potential health risks in the area.

Online and mobile mapping replaced DC Health's manual mapping methods, which increased efficiency and made it easier to share information with other agencies and stakeholders. The data collected with Survey123 enabled DC Health to justify a higher quality of larvicide that remains effective in water basins for up to six months. DC Health and NPS are now also working together to prevent rabies outbreaks.

With the use of Survey123, the 2018 season will be much more efficient, effective, and accurate than it ever has been before.

For more information on how to use GIS for health