Built just 45 kilometers from Lithuania's capital city of Vilnius, the Belarusian Astravets multireactor nuclear power plant (NPP) is due to begin operations after eight years of construction. The power plant has been a cause of ongoing regional tension and international concern. Lithuanian government leaders considered Astravets a potential risk for a nuclear radiation leak—one that could easily reach a third of Lithuania's 2.8 million population.

Preparation for a major national emergency caused by a radioactive accident at new nuclear power plant.

The team achieved its objective—to measure, improve, and put into practice the skills and capabilities of agencies within the civil protection system—with the help of GIS.

Lithuania's national leaders needed to institute civil protection measures. A wide array of federal agency stakeholders participated in this process, including the Fire and Rescue Department (FRD)—under the Ministry of the Interior—the Government Emergency Commission, subordinate agencies, ministries, and municipal organizations. Experts at the FRD and the Ministry of the Interior drafted an associated National Emergency Plan for Nuclear Accidents to prepare for the possibility of a nuclear or radiological incident.

Government officials directed FRD staff to lead a four-day, multiagency simulation of a nuclear accident. The team needed to thoroughly evaluate its disaster preparedness, response, and recovery processes and procedures to be sure it would be ready in the event of a radioactive threat to the Lithuanian people. The objective of this real-world exercise was to put into practice the skills and capabilities of the agencies comprising the Lithuanian civil protection system—by performing the functions defined in the National Emergency Plan for Nuclear Accidents.

"The exercise would allow us to test and practically measure the implementation of functions foreseen in the National Plan," said Edgaras Geda, head of the civil protection board at Fire and Rescue Department. "Preparation and planning for the exercise would be beneficial to participating institutions, enabling them to better understand the complex issues related to a potential radioactive accident at the Belarusian NPP. The exercise would also measure interagency cooperation and provide a common understanding of how to carry out the emergency functions."

To perform the emergency simulation effectively, the team needed tools that could help establish a new workflow for the documentation, analysis, and distribution of key operational performance indicators.

The team selected a geographic information system (GIS) as the framework for the execution and analysis of the exercise. Spatial technology and tools, such as smart maps, dashboards, and mobile apps, would help stakeholders document, assess, and share safety issues and potential challenges realized during the simulation.

Local Esri distributor Hnit-Baltic introduced the FRD to ArcGIS Enterprise, a complete geospatial system that operates behind an organization's firewall or in the cloud. While the department had used earlier versions of Esri's GIS platform for over a decade, staff understood that new ArcGIS technology—supplemented with a customized Radiation Incident Module (RIM)—could provide a comprehensive process monitoring solution for the emergency exercises.

"With ArcGIS, we would be able to combine spatial data from different sources and provide a real-time common [operational] picture of the emergency exercises to all involved institutions, shared on smart maps," said Geda. "This was very important for us, not only for the decision-making process within the civil protection system but also for our public information sharing efforts." 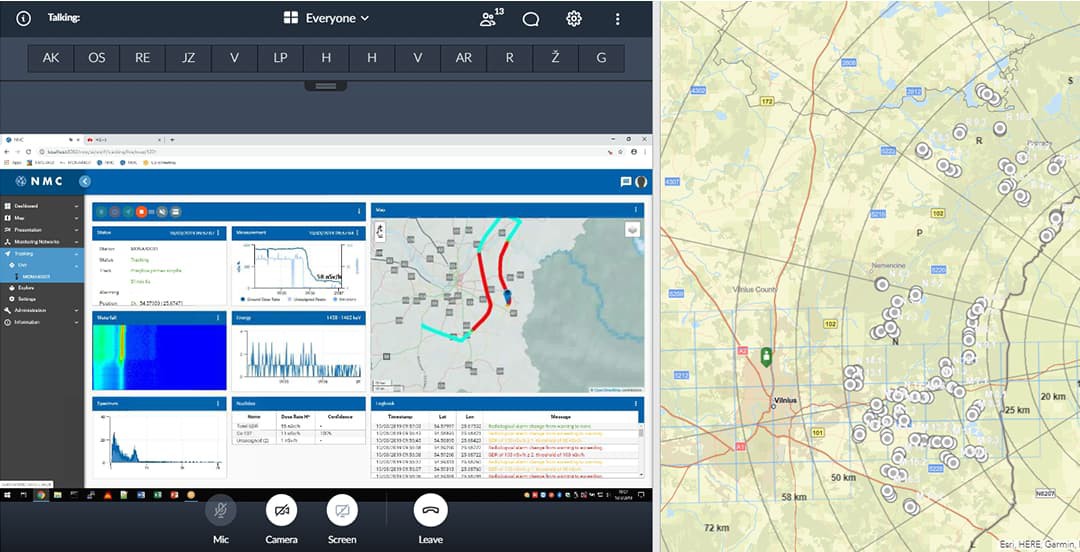 Monitoring of aviation reconnaissance and collection of samples during the Astravets emergency drills, 2019

The operational performance of the emergency drills included the following tools from ArcGIS:

The simulated nuclear emergency exercise was a rousing success. The team achieved its objective—to measure, improve, and put into practice the skills and capabilities of agencies within the civil protection system.

"The ArcGIS platform proved to be very useful for the emergency drills, as it provided a single, reliable source of data and information for all of our users, at all levels, displayed on maps," said Geda. "As a powerful visualization tool, ArcGIS contributed to improved organization and justification of management decisions, allowing the team to warn and direct residents through public awareness channels, which helped both government institutions and society." 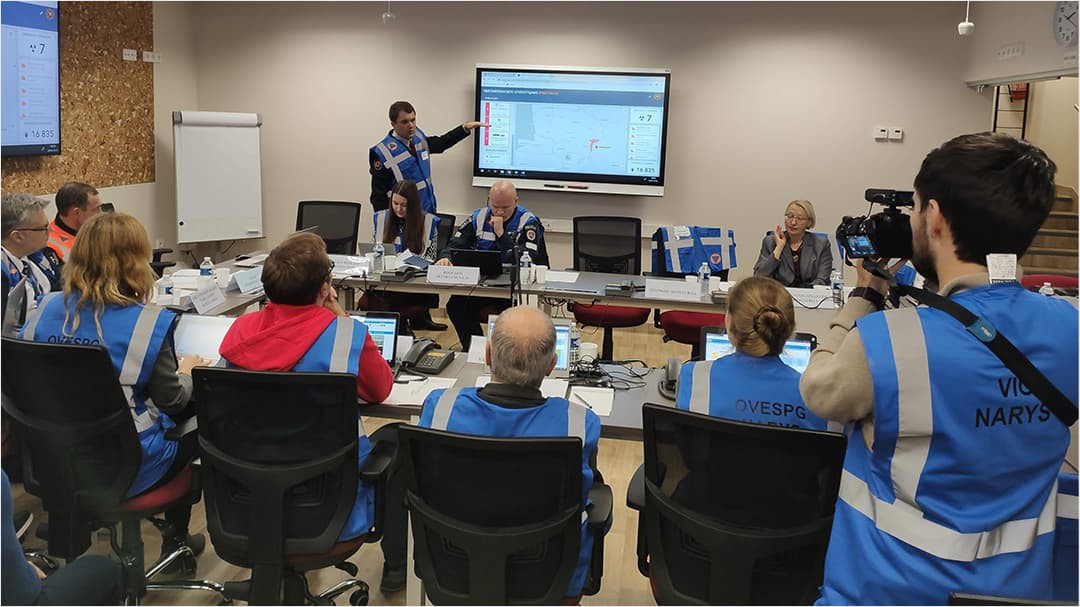 The local population warning and information system was successfully deployed. Sirens alerted citizens, while additional warning messages were sent to mobile phones and communicated on national television and radio broadcasts. Citizens within the exposed radius were efficiently evacuated, registered by authorities, and washed and given fresh clothing before being taken to safe locations for medical testing.

Simulation of the radiation cloud and setting recommendations to inhabitants (by impacted elderships) during the Astravets emergency drills, 2019

Additionally, the team members successfully launched the radiation hazard warning and monitoring information system (RADIS). They harvested field data from municipalities via RIM applications, then analyzed and evaluated the results against their emergency exercise goals. Officials held regular public briefings to provide citizens with the real-time status of simulation activities via an interactive map published to a public emergency website. 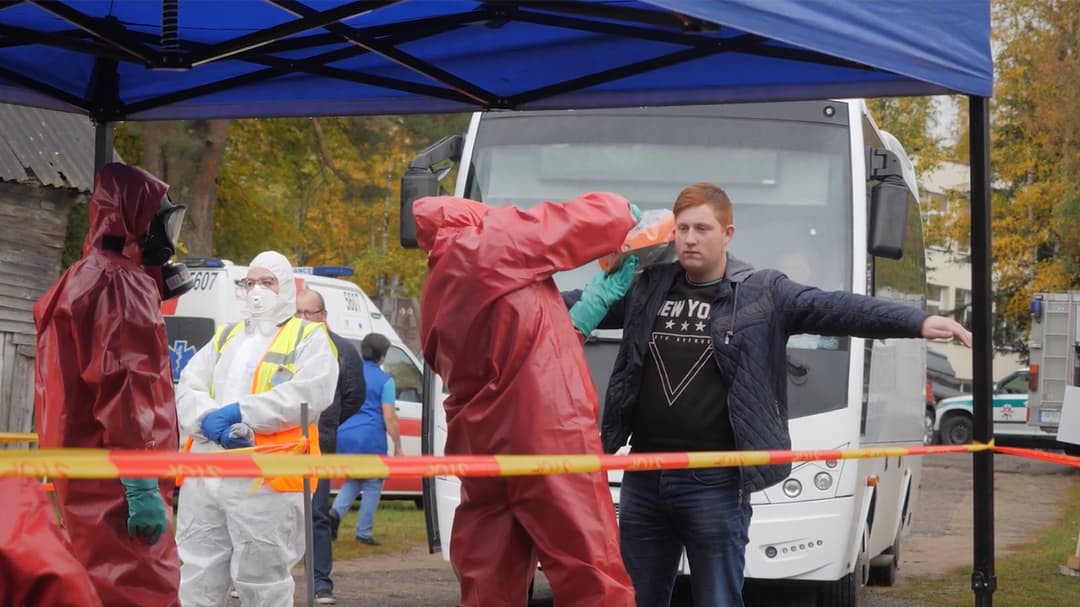 "All involved authorities across 19 different operational centers benefited from using the same operational tools from ArcGIS. This simplified all of our processes, including the gathering and arranging of real-time data displayed on shared operational maps and dashboards," said Geda. "Up-to-date information helped the FRD make well-informed decisions and in-time recommendations to exercise efficient public warnings."

International observers from Latvia, Poland, Estonia, and the United Kingdom attended Lithuania's emergency nuclear simulation. Observers expressed an appreciation for the overall process, the arranged tools, and the technical capabilities used to successfully perform the simulation. Officials from the Ministry of the Interior and other national authorities in Lithuania recognized the FRD for the successful execution of emergency drills.

"The results of the exercises were very satisfying," said Geda. "All participating institutions gained valuable experience and stronger knowledge of the practical use of ArcGIS during the drills. We saw no issues concerning the processes, workflows, or the integrity of the data, thanks to the assistance provided by Hnit-Baltic representatives."

Lessons learned from the four-day simulation have enabled the Lithuanian government to maximize its emergency preparedness and response. Should a real nuclear incident occur, the Lithuanian people can rest assured the FRD and partner agencies have the GIS tools and technology to efficiently alert and inform them and evacuate them to safety zones.

As a powerful visualization tool, ArcGIS contributed to improved organization and justification of management decisions, allowing the team to warn and direct residents through public awareness channels, which helped both government institutions and society.

Edgaras Geda, head of the civil protection board at Fire and Rescue Department.

Create web apps for your organization