Discover how GIS fueled their efforts towards success

Moving passengers and connecting people from one location to another is a well understood function of an airport.  Less known is that airports play an increasingly important role in connecting economies and global supply chains, and for driving economic development in their regions.  Currently over 4 million passengers a year travel through Reno-Tahoe International Airport (RNO), and the airport delivers over $3 billion in economic impact for the region.  RNO is owned and operated by the Reno-Tahoe Airport Authority (RTAA).

Preparing for the Future for the Masses

With passenger travel forecast to exceed over 6.5 million passengers per year and cargo growth opportunities fueled by companies poised for growth such as Tesla, it was clear that RNO’s future plans needed to consider not just accommodating future passenger growth, but also how the airport could expand its positive impacts on the Reno Tahoe region.  Capitalizing on the fact that an efficient and well-connected airport can deliver a competitive advantage to the region, the airport is positioning the Reno Tahoe area as a central distribution hub to the western states to help drive greater economic development in the region.

At the same time, any airport wishing to receive Capital Improvement (CIP) funds from the Federal Aviation Administration (FAA), must also comply with the FAA’s Airport GIS program.  Designed to collect the digital data required to support the transition to the satellite-based air traffic control system called NextGen, complying airports are required to collect precise survey information of airfield data in GIS format.  With those regulations in mind, RTIA set aside $1.25 million to complete the effort.

It was at this juncture that RTAA saw the opportunity to leverage the FAA requirements to the airport’s full advantage.  They recognized that collecting the data for the FAA’s Airport GIS program would give RNO a head start on gathering the digital GIS data needed to help the airport become more efficient and productive and help play a significant role in their future development plans. 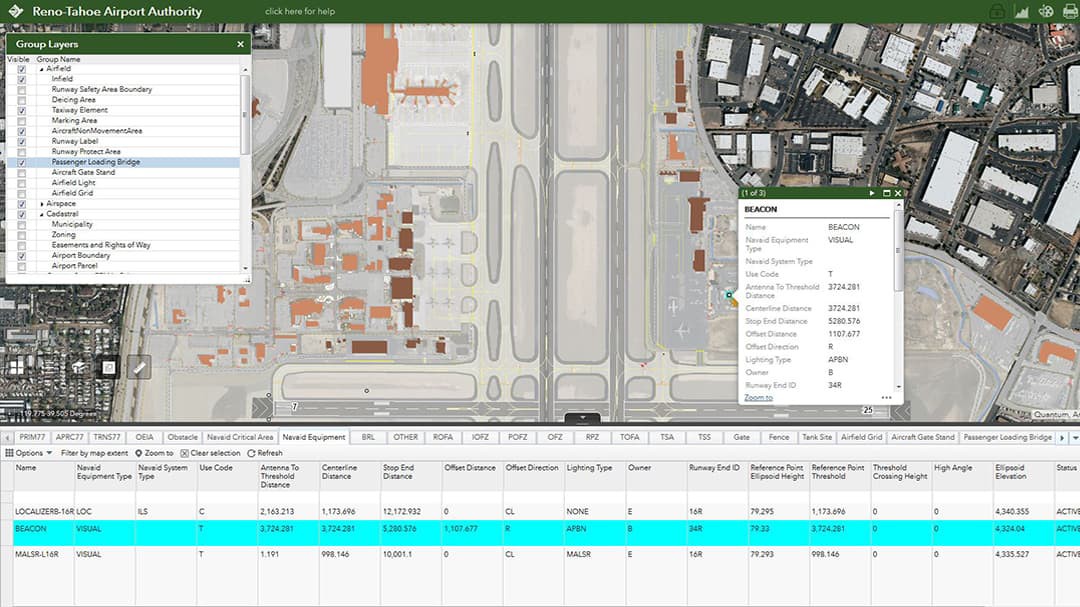 In 2013 Dan Bartholomew, the former Vice President of Planning, Engineering and Environmental Management at RTAA, wanted to ensure that the airport moved forward in a smart but comprehensive way.   He recognized that the airport needed an enterprise GIS to support its future plans, but with a limited budget he was also hesitant of trying to do too much too fast. Dan wanted an implementation methodology that was in his words, “simple, logical, affordable and manageable.”

To help him achieve those goals, he brought on Arora Engineers, Inc. (Arora) to help guide the airport through the development process.  To collect the digital information required by the FAA’s Airport GIS program, Arora began to collect the precise survey and orthoimagery data to support the creation of the required FAA data elements.  Wanting to minimize hardware and software costs, an early decision was to use Esri’s ArcGIS Online to deliver both data products and applications to the airport.

The data collected for the FAA’s Airports GIS program provided the foundation for a series of immediate applications, which were designed to support not just the FAA, but also the wider airport and airspace operations: UAS Restricted Airspace, Airport Height Restrictions, Airport Land Use, Emergency Flood Analysis, Airport Surface Radar coverage analysis, among others.

While the survey crews were collecting field data, Dan and the Arora team were meeting with each of the major offices within the airport to help define the most strategic business applications that would be built from the collected data.  Through a series of stakeholder meetings with the properties division, facilities and maintenance, engineering and planning, air service, operations and finance, the team was able to further refine the airport’s future needs for an enterprise GIS. 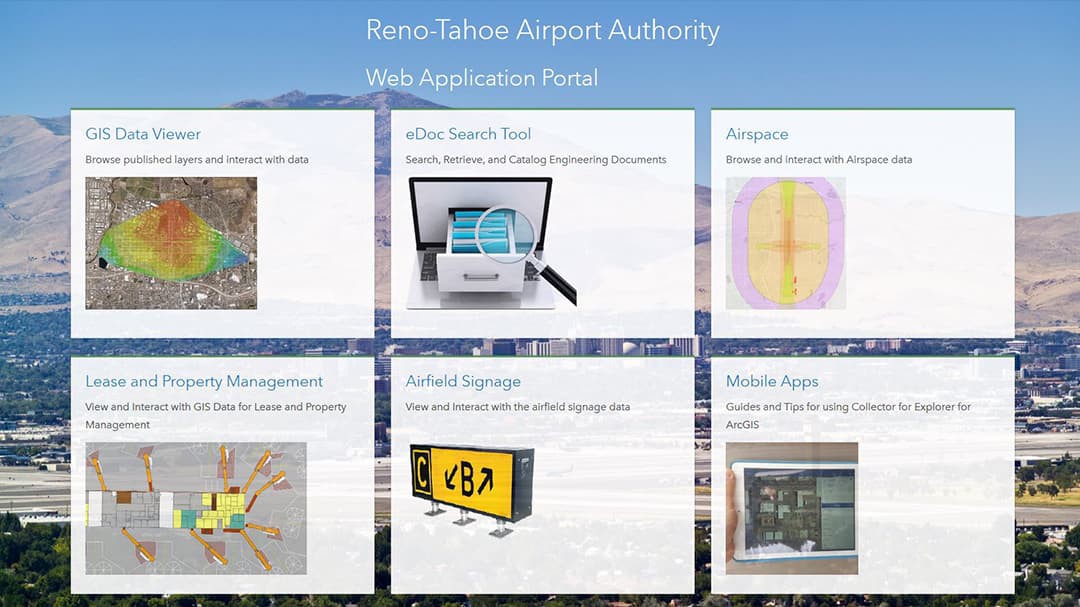 At the center of the GIS applications, is a GIS portal, through which all the major applications and data can be accessed.  Any asset or object on the airfield or within the terminal can be identified with corresponding information about the asset.  And because it is distributed through ArcGIS Online, can be accessed anywhere at any time to anyone with appropriate permissions.

This application also serves as a basic data viewer, allowing airport staff to view any relevant location on the airfield, or within the terminal.  At the same time, staff can generate their own high-quality maps and exhibits for meetings or documents, without having to wait for someone to complete it for them.

One of the first applications identified from the stakeholder meetings was a map-based document discovery system.  A common problem at every airport are the trove of disparate documents, whether word documents, excel files, photos, CAD drawings or map documents.  And finding the right documents when you need them is often the most time-consuming part of any airport professionals job.  Documents were geographically tagged to a location and made easily retrievable from a map interface.

Next order of business was capturing all the terminal lease spaces and integrating the GIS with the airport’s property and leasehold management application, GCR’s “Airport IQ Business and Revenue Manager.”

This application allows staff in the property division to access any of the lease information and understand the current status of every property within the terminal, airside or other off airport facilities.  This is especially important to accommodate more airline service and generate revenue to support future growth.

While the FAA data was very thorough with all of the airfield assets, staff was able to use ArcGIS Collector to record the location of assets not captured for the FAA AGIS data collection, add additional attributes based on field observations, and add photos from the field and tag them to their precise location.  In this way, they were able to assemble a very complete inventory of the airport’s major assets.  This data in turn becomes the foundation for their daily inspections, which are required by Federal Aviation Regulations of all certified, commercial service airports.

At each step of the development process, the team would evaluate the success of the developed application to ensure that they were meeting the business requirements of each Department.  These Stakeholder Meetings served to bring greater clarity and focus to not only what the airport wanted to do with their GIS but served to bring the business units closer together in defining their common goals.  There were regular meetings and updates with senior leadership, which served to build substantial support over time. 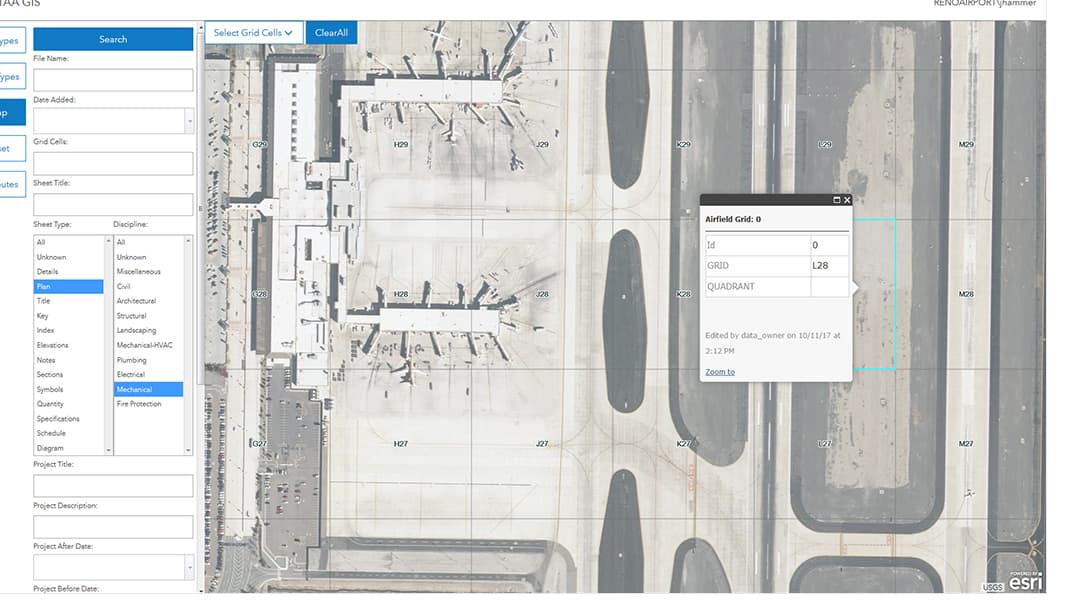 Reaching the Goal with GIS

A goal for Dan and team was to establish the data foundation of their enterprise GIS to sustain the airport well into the future.  Consultants helped them achieve this goal by writing comprehensive CAD and GIS standards along with robust data maintenance procedures.

As Dan likes to point out, all of this was accomplished with minimal staffing, infrastructure and IT support, and delivered under the original budget. The result was a GIS foundation that only requires 1.5 internal dedicated staff to maintain and continue to develop.  Jed Hammer was brought on as the GIS Manager to handle much of this work and to lead the program forward.  Current and future projects include mapping the airport’s utilities and implementation of a GIS enabled airfield asset management system.

The future value of the GIS proved itself when the airport brought Mead and Hunt on to develop a new long-range airport Master Plan two years later.  The airport created a separate ArcGIS Online Group for the Master Plan team, and all the data previously collected became the foundation for their planning activities.  Not only Mead and Hunt, but other subcontractors could take the data into the field, make comments and add their own photos to be shared among the consultant team and ultimately with the airport.

Encourage your colleagues to share the Reno-Tahoe Case Study Brochure so they can explore the power of GIS. Download the free brochure here go.esri.com/reno-tahoe-brochure.

The airport sought a new approach with their master plan which focused on expanding commercial air service, general aviation and cargo service, regional economic development and a strong focus on customer service.  Central to that effort was defining a true partnership between the airport and the community and region, that would promote the creation of a dynamic hub for economic growth.

All the GIS data was central to the development of the airports Master Plan, which calls for a $1.6 billion modernization and capital improvement plan to support growing passenger and cargo volumes.  ArcGIS Online supported a public comment application, along with the ability to add subcontractors to the Master Plan team. At the same time this provided all stakeholders with efficient and consistent exhibits as they moved through the plan and review process.

The Master Plan has now been submitted to FAA for approval, and the airport is positioning itself for a new larger role in the regional economy.  They also recognize that in today’s knowledge economy, the most valuable cargo they move is people.

The implementation and application of GIS at the organization will improve the overall business process by connecting departments and making information more accessible. Ultimately, this will allow us to serve our customers and stakeholders better than ever before.

Take your organization to new heights