Since 1956, the North Texas Municipal Water District (NTMWD) has continued to provide wholesale water services to communities in its region. As these communities have increased in population, the regional water system has grown in scope and complexity to reliably meet their needs. Today there are over 575 miles of water transmission lines and 6 water treatment plants with more than 806 million gallons per day capacity. In 1972, in response to requests from the cities and communities served, NTMWD expanded its services to include wastewater collection and treatment. The district's current wastewater system includes 13 treatment plants including 4 regional plants. In 1979, again due to customer requests, NTMWD expanded its services to include solid waste disposal. Present-day solid waste infrastructure includes a landfill and three transfer stations. 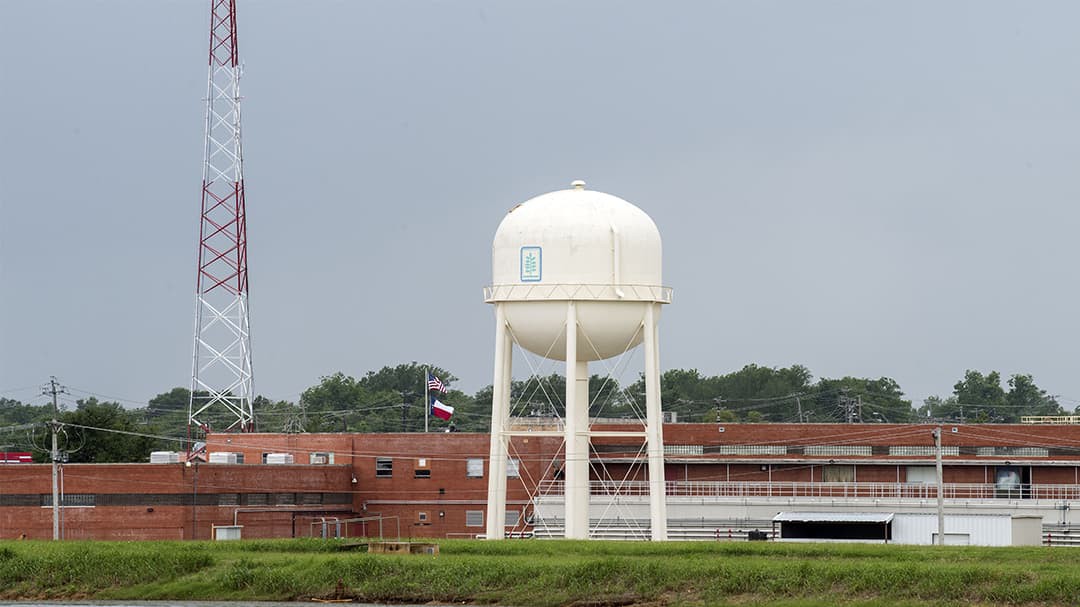 Challenge - The district wanted to move from paper-based project management to web based.

The North Texas area continues to grow year after year. To keep up with the increased demand for water, a new reservoir must be built. Bois d'Arc Lake will help meet the region's growing needs through 2040 when the population is projected to reach 2.5 million. As the first major reservoir to be built in Texas for over 30 years, the Bois d'Arc Lake project created numerous learning opportunities for the various teams involved. All aspects of the lake need to be readily available for various groups—parcel information, road closures, mitigation, pipeline alignment, and shoreline management, to name a few.

Staff relied on printed paper maps managed by several departments within NTMWD plus different iterations of maps between consultants on the various lake project components. This required weekly check-in meetings for each aspect of the project. However, the pace of the project and nonlake-related work in the geographic information system (GIS) group's queue could cause a map to change multiple times a week. Getting frequent, consistent updates became increasingly problematic. It was important for those involved to be given access to maps that accurately reflected the status of the project. ArcGIS Online was already in use to manage parcel purchases, and staff believed it could be used to support the massive new lake project. 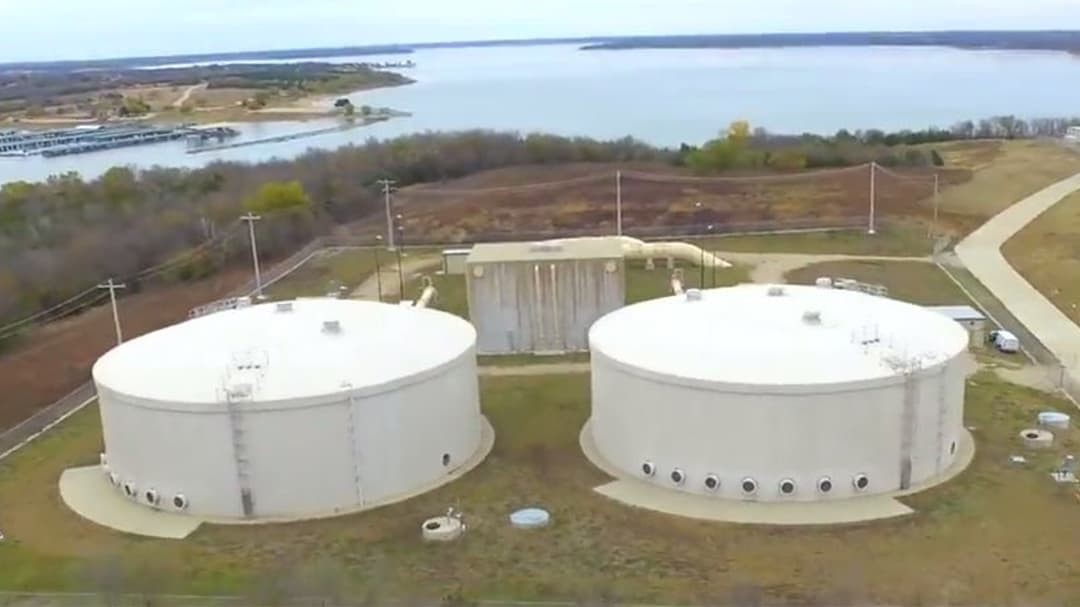 NTMWD partnered with Freese and Nichols, Inc. (FNI), to implement a solution using ArcGIS Online. FNI is a multidiscipline consulting firm that offers services in engineering, architecture, environmental science, construction services, and planning. FNI is the primary consultant on the lake project, which meant a strong solution would benefit both organizations. FNI is very familiar with Esri's software from a management perspective as well as for field use, which would allow field crews to adapt quickly to the technology.

FNI implemented an AEC Project Delivery site through ArcGIS Online. ArcMap and ArcGIS Pro were used for data analysis and updates to parcel status. Both NTMWD and FNI added users to their individual ArcGIS Online organizations, and users were given custom viewer roles to see the shared site and maps. One GIS staff member from each organization was given administrator access to the site for making changes quickly and easily.

The initial web map showing parcel status was so successful that four different web maps were implemented and are available on the joint site for various stages of the reservoir construction. Plans are in place to implement more if needed on later phases of the lake project. Each web map is separated into its own group to allow access to those who need to view their relevant information. Each group averages 50 members, with the number increasing each month. NTMWD also has links on their Home site for easier access for staff less familiar with ArcGIS Online navigation. 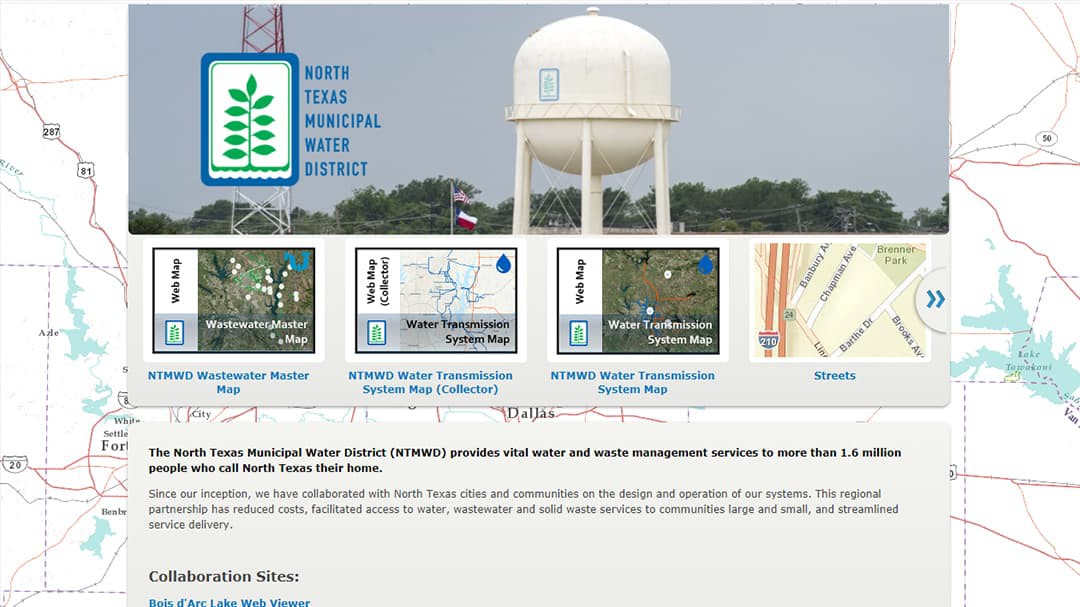 Implementing the AEC Project Delivery site enabled NTMWD to reach a larger audience and showed that GIS can provide critical information to targeted groups. The web maps are now shared during monthly NTMWD board of directors meetings to visualize changes for important areas of the project and are used daily for making smarter decisions during fieldwork. They are also used as a visual aid for numerous meetings, both on-site and off-site. This high-profile project has positively showcased the benefit of having a GIS group within the district.

Implementing GIS for this project has saved approximately 30 percent of staff time previously spent reprinting maps, sharing data, and maintaining updates between all the groups. Initially, at least 10–20 copies of the lake footprint map had to be printed every quarter for the Right-of-Way department alone. The 24" x 36" maps were printed on-site using a plotter, requiring additional resources to keep up with printing and coordination of changes to ensure reprinting was essential. In addition to time-efficiency benefits, the new process has saved money through the reduction of printing costs.

After the first web map for this project was completed, NTMWD staff quickly realized they were more readily able to answer the numerous simple questions that previously required an updated printed map. It also cut down the time the GIS group spent having to confirm the data being used was the latest before sharing. If it was published on the web maps, everyone knew that it was the best available information. Another important benefit is because both groups can make changes as they occur, everyone with access, including field users, can see the changes in real time.