Launching the Future with a Valve-Exercising Program

Thirty minutes west of Charlotte, North Carolina, the City of Gastonia serves more than 100,000 customers with water and sewer services. The municipality-owned water utility, Two Rivers Utilities (TRU), is home to the largest system in the area, with more than 13,000 valves.

For 15 years, TRU has known that a valve-exercising program would be beneficial. But it was only within the past five years that the utility hired the right team to champion the project. Leading the charge were GIS analyst Brian Hart and Utilities Division manager Brian Potocki.

"We brought in the right staff, with our two Brians," said Ron Cook, TRU assistant division manager of systems maintenance. "One made the case for a valve exerciser and trailer, while the other was able to get the technical side of things running."

Gastonia purchased a valve-exercising trailer from E.H. Wachs that included a built-in handheld controller to guide the complete workflow. "It does the whole process," Hart said. The controller can also connect via Bluetooth to an external GPS receiver, which is critical. This allows TRU to update valve locations through the exercising program.

Initially, the team wanted to use the valve-exercising trailer's handheld controller to update the valve locations. But after testing a series of various products, the team arrived at an unexpected solution. 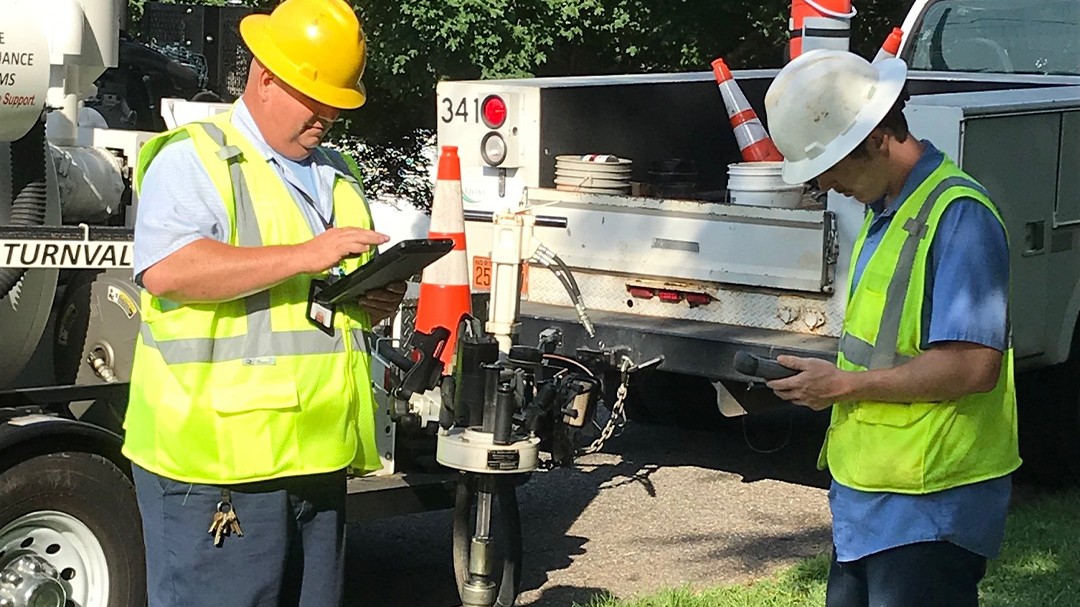 The Arrow 100 GNSS receiver has a small enough antenna that a welder could permanently mount it to the valve-exercising trailer arm to capture the precise location of each valve.

The first step in the iterative process was to connect an external GNSS receiver to the trailer's handheld controller. Hart had heard about the Arrow 100 GNSS (GPS) receiver, made by Esri Silver Partner Eos Positioning Systems. Eos technical support helped Hart connect the Arrow 100 to the handheld controller. The Arrow 100 provided an average accuracy of 40 centimeters, using free wide area augmentation system (WAAS) differential corrections. This was great accuracy for valve location data.

This initial iteration had immediate challenges. First, using the paper maps to find the valves was difficult work. Moreover, once the valves were located and exercised, their precise locations had to be manually downloaded from the trailer's handheld controller and put into the GIS. The workflow was time-consuming and prone to errors.

Hart decided to try a different approach. "We're always looking for the next best way to improve our efficiency," he said. 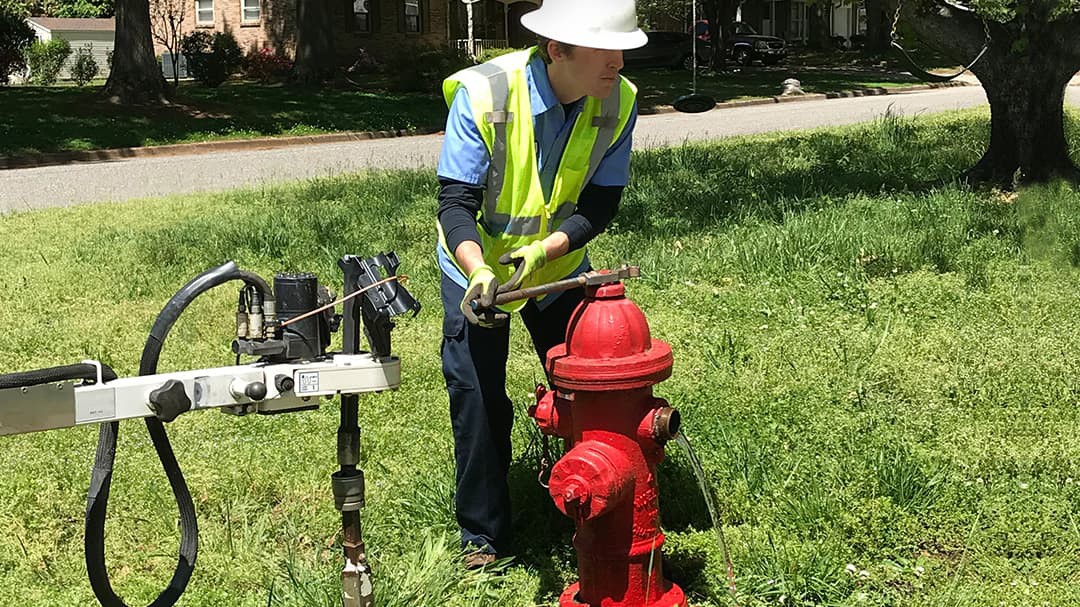 TRU purchased a second Arrow 100 GNSS receiver and configured a map of the city's valves in ArcGIS Online. Hart then connected the receiver to an iPad and installed Collector to access his web map.

Next, he sent the field technician with spray paint to mark the valves in advance. As the technician spray painted valves, he also updated their locations in real time using Collector, with the accuracy provided by the Arrow 100. With this workflow, the fieldworker not only drastically increased his speed at finding valves, he also located over 400 valves not previously in the GIS and added them to the map.

"The field technician was almost too quick," Hart joked. "Our guys would come later with the trailer, and some of the spray paint was already starting to wear away."

Another source of savings was reduced work for the valve exercisers. Since the field technician who painted the valves had also updated their locations in real time, there was no more need for capturing the valve locations on the handheld controller.

"We're speeding up [staff's] time because they do not have to locate each valve themselves," Hart said. 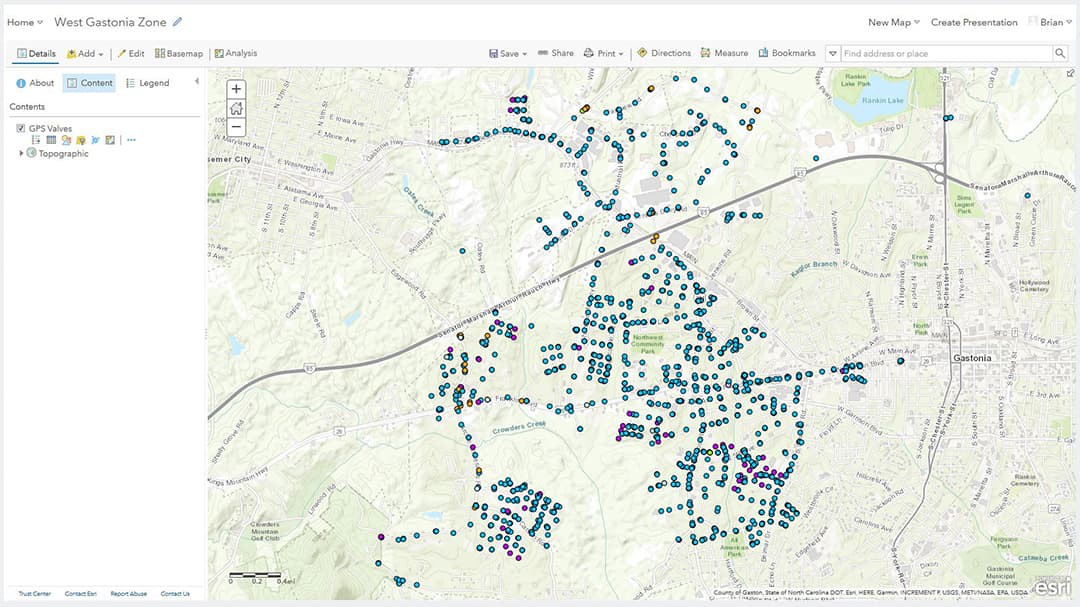 By having a highly accurate representation of the utility's water system, TRU will be able to isolate smaller sections of its water system, especially during emergencies.

Mapping all the valves in Gastonia is expected to take about six years.

The ultimate goal for TRU is to utilize valve tracing in ArcGIS Utility Network. Doing so will require the highly accurate and complete valve location data that staff are now collecting. By having that data, they will be able to isolate small sections of their system during emergency responses. This will allow staff to better target service interruptions, resulting in the fewest customer disruptions possible.

"We'll be able to pinpoint valve shutoffs during a main break, as opposed to cutting off water to a larger section of customers," Hart said. "This will allow us to keep the service running for customers outside the isolation area."

TRU expects customers to similarly benefit from the highly accurate valve records during routine maintenance and scheduled repairs. "We are really passionate about customer satisfaction," Hart said. "Being able to reduce service disruption is a huge win for us and our customers."

We are really passionate about customer satisfaction. Being able to reduce service disruption is a huge win for us and our customers.