The Allegheny County Parks Department oversees nine parks that span more than 12,000 square acres in Allegheny County, Pennsylvania. The parks offer an array of seasonal and year-round activities, including skiing, bicycling, horse riding and hiking on more than 200 miles of trails. With a large number of trails, navigation can be difficult for hikers, and maintenance of trail assets became a challenge for field workers without readily accessible maps. However, the introduction of a popular mobile app that includes detailed park and trail maps is helping to increase attendance, access, and maintenance at county parks.

Eli Thomas, Allegheny County GIS manager, and the Allegheny County GIS team sought a better way for the public to access park trails and organize available trail assets more efficiently. To accomplish this, Brian McBane, GIS Field Collection Specialist, created an inventory of all 200 miles of trails with a Trimble GPS device. Afterwards, the GIS team blazed the hiking trails and organized them in a geodatabase.

In order for the public to access this trail data, the group decided to share their datasets using ArcGIS Web AppBuilder. However, the web application was not available to users in areas with limited cell data, so the GIS team enlisted help from a special team at Esri to develop a mobile app to improve access for smartphone users.

Results
A mobile app that increases efficiency and improves safety

Thomas and the GIS team were looking for a solution that would combine the straightforward interface of the existing web application with the capability to update and the location accuracy of mobile devices. Reams and her team created the app using ArcGIS AppStudio. ArcGIS AppStudio allows users to convert maps into attractive, user-friendly mobile apps for various platforms, including Android and iOS, with no developer skills necessary. After learning about AppStudio’s innovative features, Thomas says it became clear that building a mobile app using AppStudio was the best choice.

Reams aimed to develop an intuitive and highly responsive mobile app. She and the GIS team collaborated on the desired features of the app, which included:

Reams communicated these requirements to an Esri UI/UX designer to create a user-friendly design. With the goal of creating an ideal user experience, Reams used the wireframes and hi-fidelity mock-ups to develop the app. After the mockups were approved, she used the latest version of ArcGIS Runtime to take advantage of the updated and modernized API.

In addition to AppStudio, the GIS team used ArcGIS Pro to author and publish a custom basemap and ArcGIS Online to host trails and other datasets used within the app.

“Of all the apps that I’ve worked on, the trails app has been the most exciting. Eli and Melinda were especially wonderful to work with,” says Reams. “Our working relationship made developing the app seem more like a team effort rather than the typical client/contractor engagement.” 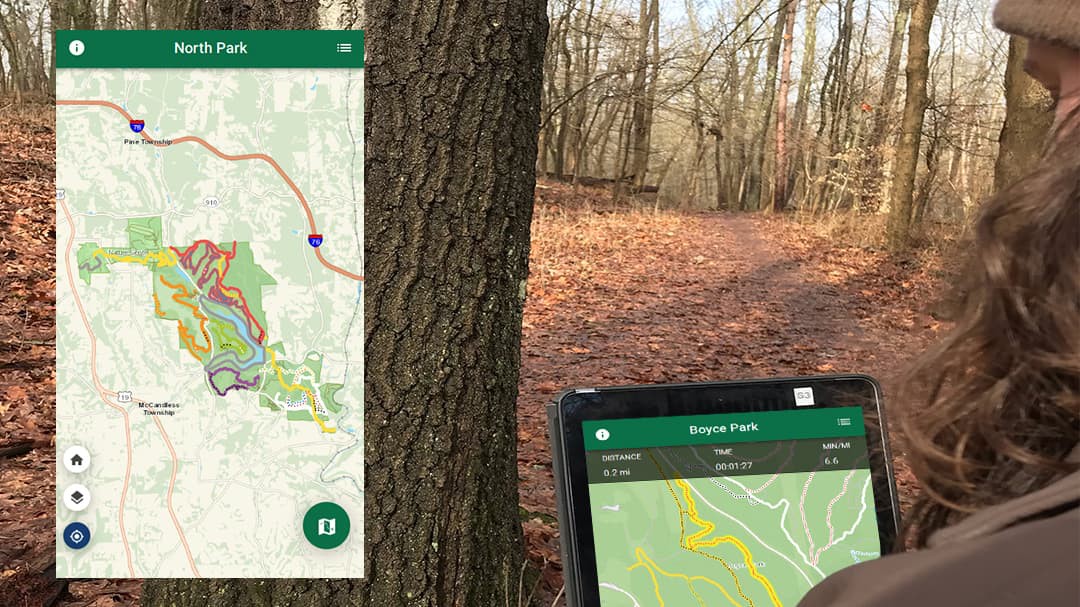 The new mobile app has had a number of tangible benefits, including increasing efficiency for parkgoers by allowing them to easily locate high-resolution trail maps with their smartphone. Prior to the development of this app, static PDF trail maps were created by the GIS team, uploaded to the Allegheny County Parks website, and downloaded by each user. The PDF maps made it difficult for hikers to navigate trails, particularly because there are so many in close proximity, explains Thomas, so the app has substantially improved user experience.

The app has also improved safety for trail-goers by utilizing real-time updates with the use of ArcGIS Online REST endpoints. Allegheny County park rangers can notify Thomas and the GIS team if something potentially dangerous occurs, such as inclement weather, and a trail must be closed. For example, in 2018, higher than usual rainfall caused multiple landslides and downed trees in the parks, says Thomas. As such, being able to reroute hikers and close impacted trails has been very beneficial.

When park rangers notify the GIS team that a trail must be closed, the GIS team edits the trail dataset in an Enterprise SQL Geodatabase using ArcGIS Desktop and overwrites the feature service’s ArcGIS Online REST endpoint. The user can see this change immediately. This allows Thomas and his team to update the trails in real-time without having to republish the entire Allegheny County Trail app.

“The park rangers are big proponents of the app and are great at communicating with us. They help us maintain all of the data that goes into it to help keep hikers safe,” says Thomas.

Reams believes the app, and the technology behind it, have the potential for widespread use. “I definitely see this app as something that Esri could turn into a template to use for other city and county parks & recreation departments. [At Esri] we have had discussions about turning the app into a configurable template,” says Reams. “I hope others are able to implement it and have similar success.”

Thomas believes the app has resulted in increased use of the parks, which is an important goal for Allegheny County. “The app has attracted new groups to the park and has generated a lot of visitors. By and large, it has been all positive feedback,” he says. “The goal [of this app] is to get people out in our beautiful county parks and start exploring. I think it’s really built for the citizens of Allegheny County.”

The goal of the app was to create something to improve trail access and ultimately promote our parks. We really want to urge citizens to get out there and use them. It’s great to have people enjoy the app and our incredible natural resources.

Start building your own apps