Following reports of alleged voter suppression in the 2016 US presidential election, they created an app with a simple web form to help citizens report voter suppression incidents and give citizens a way to identify potential voting errors. Based on these reports, the couple built digital maps displaying results and shared them with the media and the public to raise awareness of the opportunities to do better.

"The ability to extract data from people all across the country and present it visually is a powerful tool that Esri has to offer. The potential of this technology to empower people to tell their own stories is compelling."

See How It Works

Check out the SeeSay Story Map

Democracy Labs wanted a fast, efficient way for voters to report incidents of voter suppression as they occurred. Voter suppression tactics can make it difficult, or altogether impossible, for citizens to vote. It may include things like changing voter ID requirements or cutting voting site hours and locations.

For reports to be meaningful, they needed to be timely. This meant that reporting problems needed to be easy. Democracy Labs wanted to find a solution to track and report problems quickly to share timely information. With millions of voters at the polls during an election, the reporting medium would also need to handle a large volume of entries and be scalable for use in future elections. To protect users' sensitive information, the solution also needed to be secure.

As elected officials diligently work toward a solution to provide safe and secure voting opportunities for citizens, DemLabs wanted their development to be a part of it.

"If everyone doesn't get a vote, it's not a fair election. It's incumbent on us all to do whatever we can," says Puri. "And if technology can help reduce voter suppression, then in a small way, we will have done our part." 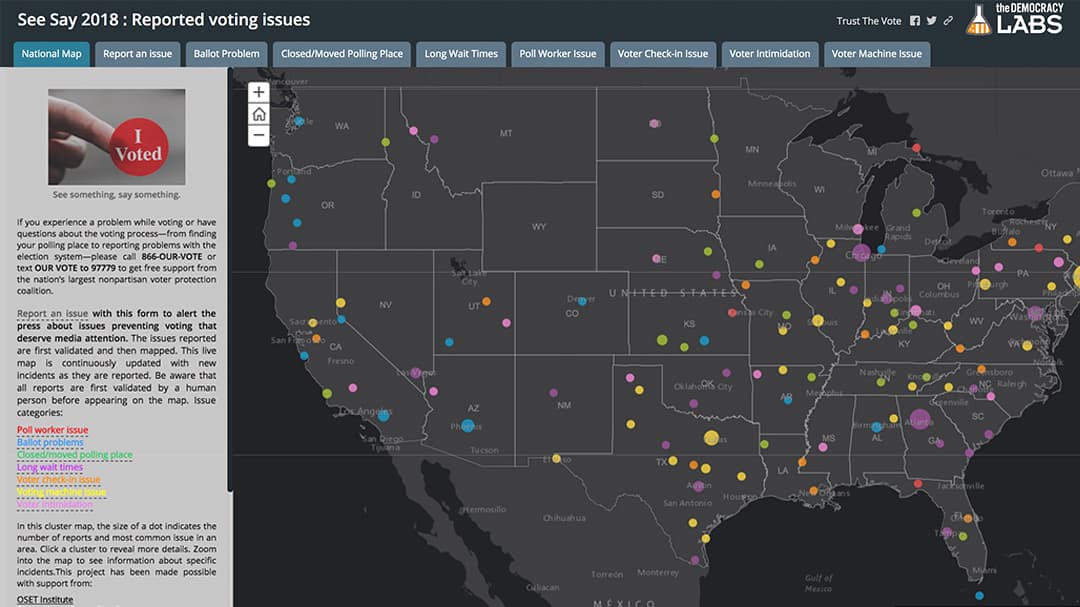 Puri says, "Survey123 allows people to choose what kind of problem they have, upload a picture or video, and geocode their data. It's the perfect solution."

The app makes it easy for citizens to identify what the specific incident was and when and where the incident occurred. If applicable, they can also attach a photo or video. The custom form offers a selection of eight potential problems such as voter harassment, nonfunctioning ballot machines, or unhelpful staff.

Survey123 for ArcGIS inputs data from completed surveys into a data layer in ArcGIS Online, a cloud-based mapping and analysis solution. ArcGIS Online is used to create interactive maps, analyze data, collaborate with others, and share results. From there, Democracy Labs was able to bring in other layers available through ArcGIS Living Atlas of the World, the foremost collection of geographic content from around the globe.

Democracy Labs worked with six volunteers, authorizing them to access the completed surveys streaming into ArcGIS Online from the app. Based on criteria that they established, they screened submissions to try and verify that they were valid and/or newsworthy (meaning the incident reported was flagrant or unusual). Democracy Labs took submissions deemed valid and further processed them. These were eventually placed on an Esri Story Maps app showing where reports of voter suppression incidents occurred.

Esri Story Maps helps people tell a story by combining maps, text, images, and multimedia into a rich and compelling narrative. The Democracy Labs story map displays eight different categories of voter suppression issues and reveals where the highest concentrations of incidents are. Viewers can also click on each dot on the map to see details about incidents.

The SeeSay story map is now part of Esri Maps for Public Policy, a site that encompasses maps designed to incite changes in public policy. These maps aim to address significant social issues and community challenges.

"This story map delivers people's reports and presents results visually in a form that other people can understand and relate to," Puri says. 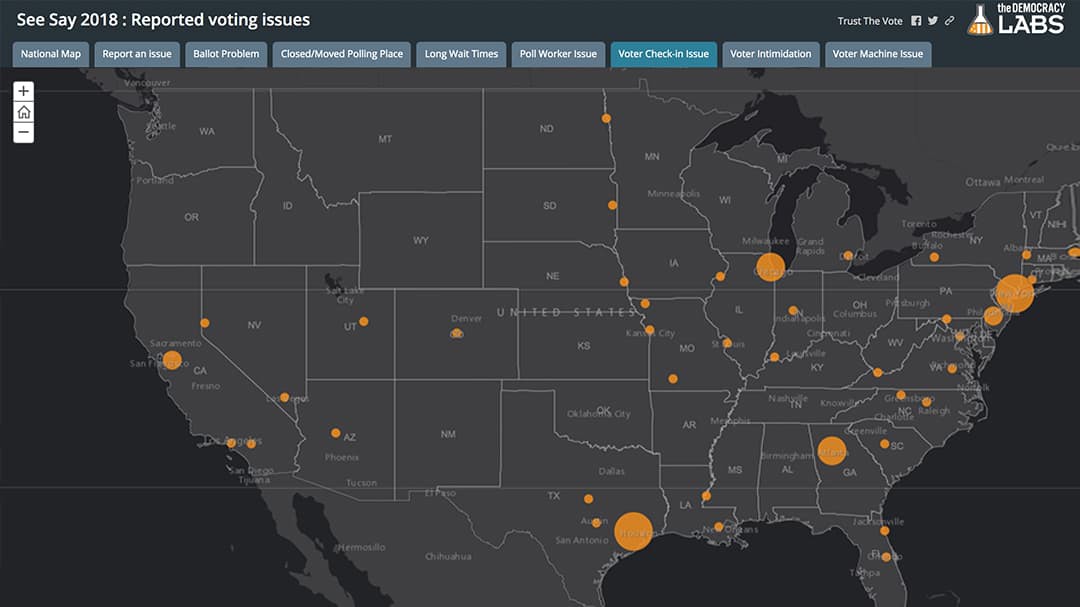 Democracy Labs developed and completed the entire SeeSay project in less than 15 days. Using Esri tools, Democracy labs was able to quickly transform their data into a map. Survey123 for ArcGIS and ArcGIS Online handled the large volume of entries coming in, while the Esri Story Maps app displayed real-time results on a live map. The project provided an effective way to share results with the public.

ArcGIS Online also enabled Democracy Labs to put the reported incidents into a database, which can now be used by other groups or for future Democracy Labs projects.

The SeeSay story map received more than one-quarter of a million views, without any formal marketing. Word about the app spread quickly with the help of the media, voter advocacy groups, and celebrities. The local affiliate of NBC in the San Francisco, California, area did a report on the app, and the Open Source Election Technology (OSET) Institute, which had experts embedded with NBC News and MSNBC on election night, advised people to use SeeSay.

Television personality Samantha Bee released a political trivia game just before the midterm elections and added SeeSay to it as a challenge to encourage its more than 310,000 players to report voting issues. And organizations such as Rock the Vote and Center for Common Ground, which try to galvanize young and underrepresented people to vote, publicized the app as well.

Democracy Labs' project raised public awareness in its debut during the November 2018 midterm elections. Using SeeSay, citizens reported 1,133 problems—yielding 623 valid reports—on Election Day. The project highlighted 63 incidents as being newsworthy and shared them with the media. By December, the digital map had had more than 248,000 views.

The next step for Democracy Labs is to teach other not-for-profit and advocacy groups to use this geospatial technology. Puri wants to promote awareness about geographic information system (GIS) technology and storytelling for organizations that may be unaware of what GIS can do.

"The limiting factor is not technology or money. It's how quickly we can share the potential of GIS," says Puri. "It's just a question of imagination. I see a lot of potential, and we're excited to do more."

See how it works