From natural disasters like floods and hurricanes to disease outbreaks, Direct Relief is there to help people affected by poverty or emergency situations. This California-based nonprofit organization supports health care partners to help provide critical medical resources, including medicine and medical supplies, to areas in need in the United States and around the world, including disaster-stricken areas. To date, more than 38 million pounds of medicine and supplies have been delivered and more than $6.2 billion dollars in medical aid has been distributed in partnership with local groups.

With wildfires posing an ongoing and increasing threat in the United States, Direct Relief responds each year throughout the Western US. During the 2018 Camp Fire in California's Butte County, one of the most destructive fires in state history, Direct Relief supplied resources such as protective masks and medicine to health care agencies and first responders.

Understanding large-scale movement during a disaster

Solution
Direct Relief chose ArcGIS Insights for data analysis and population tracking during the 2018 Camp Fire in California's Butte County, one of the most destructive fires in state history.

Result
The ability to reuse an analysis model to quickly analyze other disasters and more efficiently supply resources to health care agencies and first responders.

"Direct Relief is kind of a complex enterprise, like many global nonprofits, so there's a lot of moving pieces to facilitate our activities and get work done," says Andrew Schroeder, director of research and analysis for Direct Relief. "That includes anything from the process of actual goods movement, international and in-country logistics, and data collection."

The group used maps and data analysis software to track people in need during the 2018 Camp Fire and efficiently deliver medical resources.

For Direct Relief, understanding the spatial components to a problem is essential. Anticipating where people may experience certain types of physical events or health problems, as well as determining where relief is needed during a crisis, has a geographic element. As such, the group sought a solution to obtain the best location data for planning. Based on media reports during the Camp Fire, there was a large-scale movement of people within California from the city of Paradise to the city of Chico following mandatory evacuations.

Direct Relief needed to answer an important question: Where did evacuees go? The group utilized Facebook Disaster Maps as one of its tools. These maps are produced by the Facebook Data for Good team and use information about Facebook usage in areas impacted by natural hazards, producing aggregate pictures of how the population is affected by and responding to the hazard.

Facebook Disaster Maps data accumulates at scale and can get bogged down in a web browser once users scale up the points at a certain level, says Schroeder. As such, the team wanted a scalable solution that would allow them to do things such as compare data from different events or data from only one event.

Schroeder explains that he needed to demonstrate what all the data they collected means and visualize how impacted areas have changed in population during a short period of time. They needed a new product with the ability to easily display data. Direct Relief also needed a tool to produce real-time, accurate data to give to the local agencies that help distribute resources.

"Knowing something about where people went was important to figure out. We try to get as specific as possible in terms of location, numbers, and time and talk about the changing dynamics in their areas," explains Schroeder. 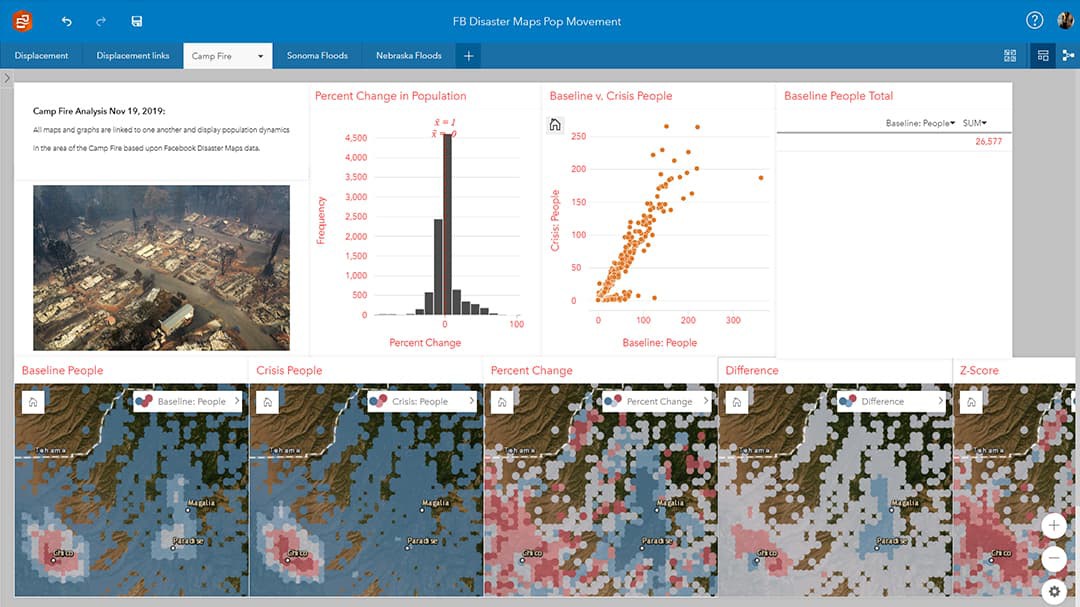 Data from Facebook Disaster Maps shows near real time change in population densities for crisis affected areas. In this image you can see the pre-crisis baseline population of Facebook users in the Chico-Paradise area along with integrated map views and graphs showing the density of Facebook users at 8am on November 19th during the crisis, as well as the raw count of population change, percentage change and the z-score. Using this integrated analysis Direct Relief and its partners can understand the scale of impact on affected populations as well as specific neighborhoods and points of interest which may be disproportionately in need of health care support.

To answer important questions such as how large is the displaced population and how many partners are needed to distribute supplies, ArcGIS Insights was used to analyze location data. Direct Relief assessed things like whether the believed directional tendency was accurate and what the scale was, in addition to details about the population, such as demographics. This particular data helps them make estimates on what resources the impacted population will need, how much of it is needed, and where it's needed.

Direct Relief also used ArcGIS Insights to create a map that enabled the team to view trends, such as areas of high and low concentration or movement to different places. This enables the team to ask and answer critical questions, like why is one region higher in population? How does the data relate to details like where is the perimeter of the fire?

"The ability to bring together that layer of population estimation and movement estimation with what we already know about what those kinds of populations require in these situations helped really change a lot of the dynamics," says Schroeder. "It really helped the providers to understand more about what they actually require."

Schroeder says the Direct Relief team was working on data analysis only and not the repeatable model part of the analysis, which they sought to change. The use of ArcGIS Insights enables the autocreation of the analysis model, including saving and sharing the steps to rerun the analysis and allowing others to automatically run the analysis with different data.

"Insights works along with you. So, as you do the analysis, it helps you put the model together so that by the end, the repeatability part of the work is already done," says Schroeder. 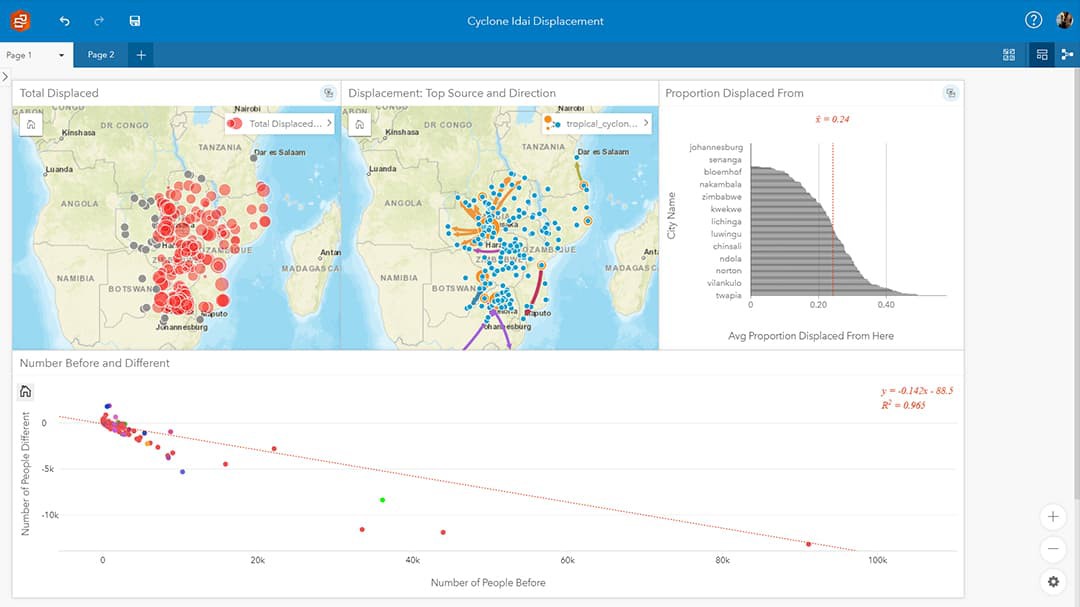 After Cyclone Idai communities throughout Mozambique and neighboring countries were temporarily displaced. Data on the location and movement of Facebook users can help to understand where people may be leaving from and arriving to. Using link analysis maps in Insights it is possible to visualize these population flows as they change over the course of a crisis event.

Schroeder says that Direct Relief has seen a number of benefits with the use of ArcGIS Insights, beginning with its use during the Camp Fire. The group has enjoyed the ability to reuse the model created for the Camp Fire to quickly analyze other disasters. Also, the tool's features, such as relate, filter, and join, allow the team to work in "very flexible visualization environments," says Schroeder. With just one tool and a few flexible ways to add and subtract, the team can examine variables in different ways.

Collaboration has also improved within Direct Relief and with external agencies. Schroeder describes ArcGIS Insights as a "collaboration first" tool, giving Direct Relief the ability to easily share things like data, analysis, and results with partner agencies during the Camp Fire.

"This tool gives you the ability to share datasets and features out of Insights so that it goes into other parts of ArcGIS Online really simply and natively," says Schroeder. "From the first moment, it's built to be focused on the idea that this is a collaborative practice, which is super helpful."

He notes that in a fast-moving emergency situation like the Camp Fire, information comes out—and changes—frequently. As such, the simplified analysis and data viewing offered by ArcGIS Insights are essential.

"I want data that I can easily see to help me quickly identify areas of interest. The repeatable analysis becomes quite valuable [during emergency situations] because if the model is built, then it speeds up my ability to take the new dataset, pop it in, and look at it," Schroeder says.

He adds, "That kind of flexibility where I'm not getting stuck on the formatting or data imports is super helpful. It's very dynamic, which is great because we're trying to do the best we can with very few people under very time-pressured circumstances."

Schroeder believes another key value of ArcGIS Insights is the ability to examine different dimensions of data and perform analyses to determine the most valuable information. It gives Direct Relief and local agencies an easier way to view complex data with features such as cross filtering.

He says, "With ArcGIS Insights, it's really a matter of what question you want to have answered and how you want to answer it.". 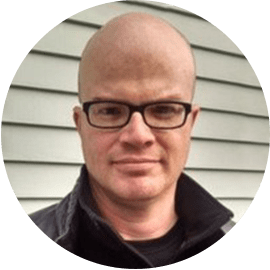 "Insights gives you the power to transform otherwise complex data into a clear idea that has some kind of tangible action to it. When you can engage with a map and see something about the world that was hidden before, that's pretty powerful."

Andrew Schroeder
Director of research and analysis for Direct Relief