With a dedication to safety, consistency, and professionalism, ACCESSiFLY uses innovative technology to offer unique solutions and deliverables to support building sciences. The Toronto-based company offers GIS, condition monitoring, inspections, and commercial drone services to building sciences and civil engineering firms. This can support the optimization of a building's performance, increase the sustainability of new and existing structures, and prevent building failures.

To improve the process of collecting thermal infrared data (also referred to as nonvisible imaging, since the infrared spectrum is not visible to the human eye) that is part of its inspection services, the ACCESSiFLY team implemented a desktop app to streamline the creation of professional imagery products from drone-captured imagery.

The primary deliverable for ACCESSiFLY's clients is the examination of potential issues with buildings by detailing the building's construct. Chris Gorczynski, ACCESSiFLY president and head of the Reliability Centered Maintenance program, says staff essentially strive to diagnose, detail, and display everything in the structure.

The ACCESSiFLY team can push deliverables to clients in half the time with unparalleled accuracy.

One way they accomplish this is by performing drone inspections with remotely piloted aircraft systems (RPAS) equipped with FLIR thermal infrared imaging to locate potential problem spots and inefficiencies. The ACCESSiFLY team was developing a specific workflow that involved reevaluating its approach to larger enveloped scans with buildings that included thermal infrared data.

Gorczynski explains that a common issue with thermal infrared data is that it can't be georeferenced the same way as data from optical imagery. Georeferencing a thermal image means that the internal coordinate system of a map or aerial photo image can be related to a ground system of geographic coordinates. He says that when it comes to aerial thermal infrared imagery, it's not possible to maintain a complementary level of accuracy against optical imagery taken from an RPAS.

Thermal Infrared cameras do not see optical data or patterns or recognize shapes with nonuniform temperatures. This means you cannot find a common structure on the ground and link the images from the RPAS back to overlapping images and a precise position when attempting to generate a large 2D orthomosaic and/or 3D mesh.

"We approached this problem because we're basically soliciting a product that is based on accuracy. We strive to analyze and diagnose something and then determine where fault failure might be," says Gorczynski. "And the largest component of our scanning and analysis was falling through the cracks because of the software platform we were using at the time. The software was failing us with regard to accuracy and consistency of processing."

ACCESSiFLY generates 2D and 3D products that include a 2D map and a 3D scene view. Gorczynski explains that the images looked striking until thermal images were leased on top of them, causing them to float or appear bent, which became an issue. The team was in search of a new solution that would improve the collection and resolution of thermal imagery to enhance client deliverables. 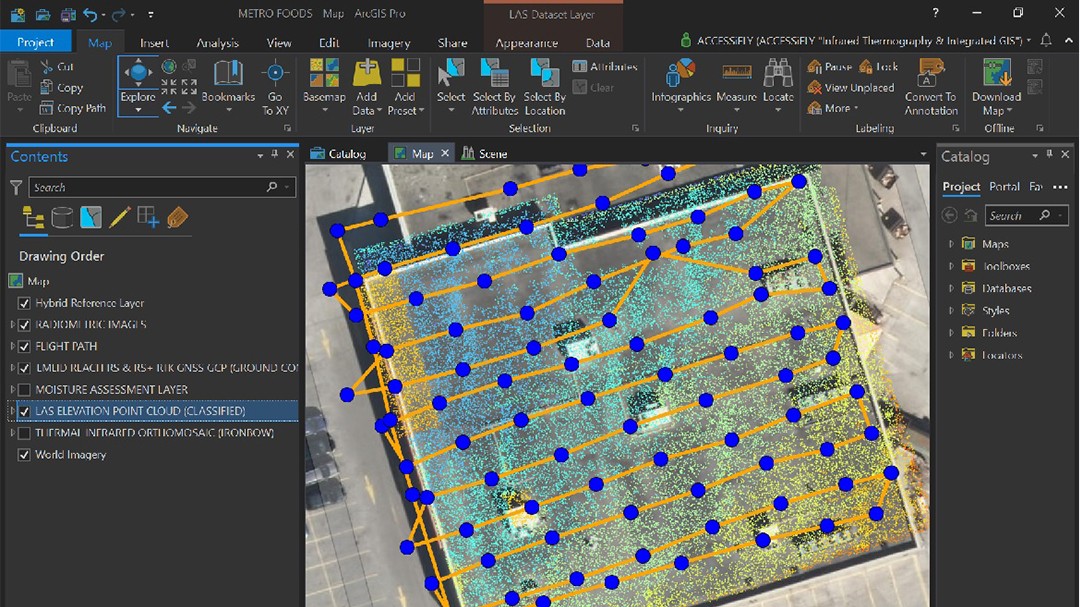 The ACCESSiFLY team was already using several Esri software products and worked with Esri to explore new options that would allow it to continue using them. The team ultimately chose ArcGIS Drone2Map, a desktop app that transforms drone-captured imagery into professional-quality 2D and 3D imagery. In addition to the app's affordability, ArcGIS Drone2Map was an excellent option for ACCESSiFLY because of its advanced features.

According to Gorczynski, the five-person team was already using Esri's ArcGIS Pro, desktop geographic information system (GIS) software that provides professional 2D and 3D mapping, which allowed the team members to deconstruct the radiometry, multispatial images, and thermal images. As such, the new solution they wanted to develop would integrate both ArcGIS Drone2Map and ArcGIS Pro.

The ACCESSiFLY team began working with ArcGIS Drone2Map to see how they can determine what the error accuracy is by looking at the EXIF tags (a type of image file format), originally in the thermal data, and then comparing that to the optical data flown by the drone because it's flying autonomously and in the same position.

In what Gorczynski describes as "a long process of trial and error and empirical research," the team had to design something from scratch that would have a recognizable shape and image to better capture thermal imagery with ArcGIS Drone2Map.

ArcGIS Drone2Map integrates perfectly with ACCESSiFLY's existing software, including ArcGIS Pro, allowing the team to use other applications in conjunction with it. As an existing Esri user, Gorczynski also enjoys the fact that ArcGIS Drone2Map is a familiar interface and improves uniformity, as the team can use it with the existing Esri platform. 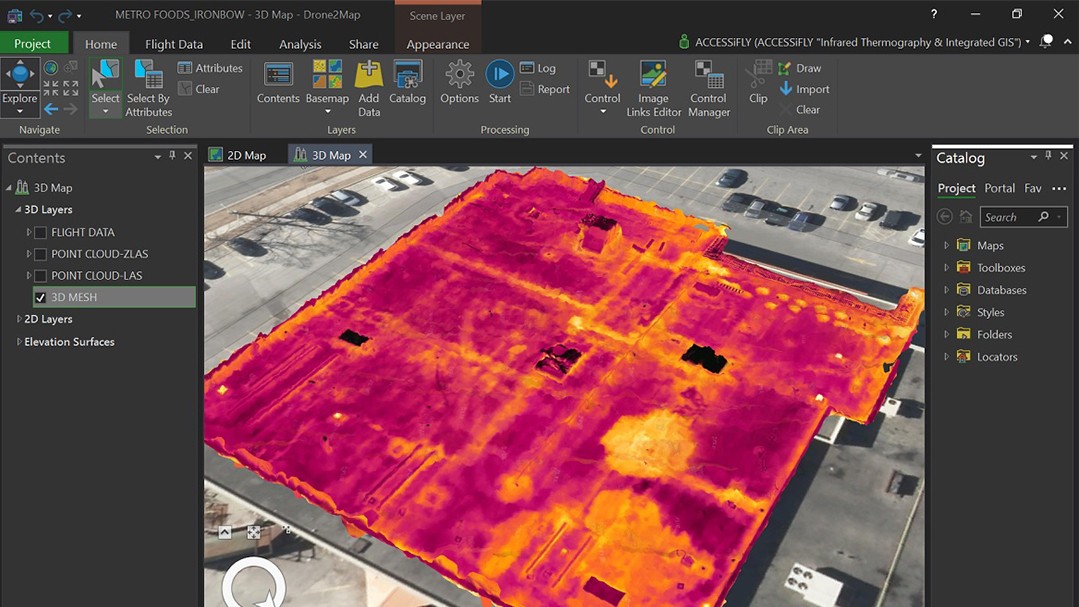 From streamlined workflows to crisper imagery, ACCESSiFLY has seen a number of positive benefits since the implementation of ArcGIS Drone2Map. Two significant advantages of this new solution are the faster workflows and the improved accuracy of the data. The expedited workflow means the ACCESSiFLY team can push deliverables to clients in half the time with "unparalleled accuracy," says Gorczynski. This translates to cost savings for the company and the client.

For example, Gorczynski says a lot of companies have to do two flights to capture data, meaning they have to fly during the day and again at night to do their infrared work and the infrared report, then try to stitch the images together. With ArcGIS Drone2Map, he explains, his team no longer needs to conduct multiple flights because it can drop these targets in the ground, do the scan in an hour, and be done.

"We began to enjoy processing speeds that were three hours faster against benchmarks from our existing software package for the same 500 image sequence sets, which absolutely floored us," says Gorczynski. "When we saw the 3D output rendered in 42 minutes from 500 images without a single error, we were speechless."

Gorczynski says the data output from ArcGIS Drone2Map is so accurate because a GIS is embedded into it, which means it's got a reliability component and validity component of accuracy in the data that "can't be matched."

He adds that overall processes in the field are now streamlined, but especially back end processing in the office. The machine learning algorithms have led to a significant reduction in the time required to transition from the field, back to the office, and postprocessing, he explains. The team can receive things like the drone flight path, the 2D and 3D mosaic, and multispatial data from one application; whereas previously, these things had to be generated with multiple pieces of software.

Gorczynski explains that the team would spend typically a day on a survey, and since the implementation of ArcGIS Drone2Map, they now deploy one to three hours with faster and more standardized workflows. Previously, the team would typically set aside 1.5 working days to move from the field through the office and back to the client for an expedited, complete infrared thermographic package. Now, it has shaved off a full eight-hour day, allowing clients to receive deliverables faster.

"With the previous software we were working with, we would spend hours on extremely fast computers waiting for things to process, and they wouldn't come out half the time. Now, I don't think we've had a single failure on a process. The accuracy gain is incredible," says Gorczynski. "There is a reliability component here that we cannot understate, and when we go to process our data in the manner we do, we know Drone2Map will perform."

Also, ArcGIS Drone2Map gives ACCESSiFLY the ability to easily edit data and make adjustments, saving time. Any changes appear instantaneously with no need to reprocess and export, giving the team a dynamic environment to work in.

"If I have drone data that I need to make a change to, I make the change in Drone2Map that gets reflected everywhere else globally in just one application. That's really unique," says Gorczynski.

Gorczynski explains that with ArcGIS Drone2Map, the team members can extract information and then basically rereference it on the ground by deploying a thermal target that they placed in the ground, which can be imaged with an infrared camera.

"That's sort of the trick and the magic behind it. I can tell you that the only way that has been done successfully is through ArcGIS Drone2Map. You simply can't do this [with other software]," says Gorczynski.

The quality of the drone-collected imagery has also improved. Gorczynski describes the imagery produced by ArcGIS Drone2Map as spectacular, crisp, and beautiful, adding that the resolution on raster files is "unbelievable." Also, the tool has helped the team more easily gather images in the field.

"If I take an infrared image and I place it in ArcGIS Drone2Map and I don't reference it [give it a point on the ground], the GPS on the thermal camera isn't very good. And that was a huge disparity for us," explains Gorczynski. "We could never get the two images—flown literally by the same helicopter—to line up with one another until we put something on the ground and told the software, and this is the intuitive component of Drone2Map."

He adds, "It looks at it and says, 'I know that point. I found it in this image, so it's going to be that point.' It looks to the overlap and the consistency between images."

The feedback from clients has been very positive. Gorczynski says, "It's been huge for clients. They are excited when we say, 'We can build you a simple model that contains your thermal data, your other scans, and more, but when you're looking at the thermal image in the thermal exterior, what you see is precisely where it is.' It's very, very helpful."

Gorczynski and the ACCESSiFLY team are looking forward to continuing their work with ArcGIS Drone2Map and delivering superior results to clients.

"ArcGIS Drone2Map is completely dependable. We're able to deploy a custom imaging product for clients to view and interact with this data as needed," says Gorczynski. "We've seen huge differences in our modeling, planning, and collaboration."

He adds, "It also enables the complex deliverable suite of imagery, reports, plans, recommendations, and actions we produce. It's a flawless piece of software that does everything it's supposed to do and then some and works flawlessly with our FLIR hardware." 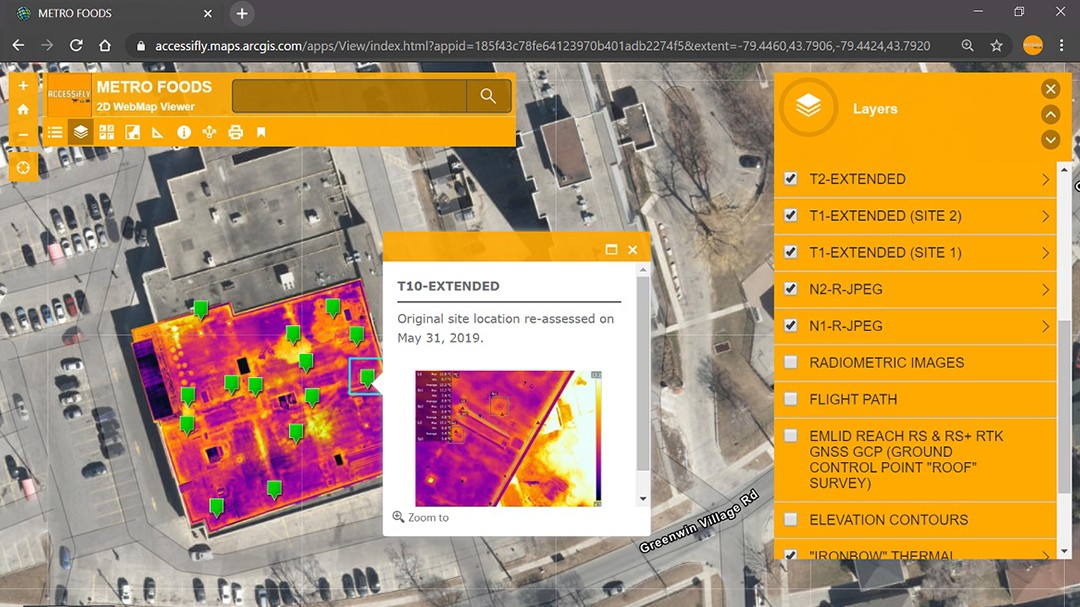 Get started with ArcGIS Drone2Map