Law enforcement officers in Altoona, a suburb of Des Moines, Iowa, serve and protect a community of 20,000 residents—and with visitors, the number of people they police can increase by thousands. With a shared vision of making Altoona the place of choice to live, work, and play in Iowa, Altoona Police Department (PD) is combining traditional policing with new technology to prevent and solve crimes and keep residents safe.

Altoona PD currently uses CompStat, an organizational management system for police departments that combines management techniques, crime analysis, and mapping technology. However, due to the lack of timely data and report generation, the ability to make quick data-driven decisions was a challenge.

Result
The ability to produce dynamic reports, give senior officers the information they need to make decisions and, allow police officers to interactively explore data to understand what's going on in their district.

The process previously in place meant that Tony Chambers, a captain with Altoona PD, had to extract data through SQL, a standard language for storing, manipulating, and retrieving data in databases. Chambers would place the data in spreadsheets, use pivot tables for analysis, and then finally produce static reports.

However, to support the department's efforts in using data to understand what and where things are happening in Altoona, Chambers wanted to infuse more location-based data with CompStat to better allocate resources.

The allocation of resources involves tasks like analyzing data to determine what officers' workloads are and how many officers are needed for crisis and emergency response, and using data to justify the need for additional resources.

"It's difficult to allocate resources to areas unless we're able to map this stuff. It's great if I just create a bunch of reports with stats on them, but as far as operations, decision-making, or resource allocation, you still don't know the 'where,'" says Chambers. "We needed to tie all of that information that I was putting into those static reports to locations."

There was also a need for more timely information. According to Chambers, with the time it takes to compile data in CompStat, put the data into a pivot table for analysis, and produce and distribute a report, "the data is already [weeks] behind."

In addition to improved operational decision-making, Chambers wanted a tool that police department staff could easily access and use to present information in a way that is easily understood.

"Staff come and talk to me about this data and want to know more about it. I want to be able to put this information—the data, the analytics—at the fingertips of even our patrol commanders and sergeants," says Chambers.

Chambers set out to find a new solution to collect and analyze data for operational decision-making, resource allocation, and workload analyses to strengthen strategic planning. He was already a user of ArcGIS Pro, a desktop application for data analysis and 2D and 3D map creation, and ArcGIS Online, the cloud-based geographic information system (GIS) mapping software. So Chambers decided to explore other Esri offerings for an especially smooth transition.

Chambers attended a local workshop on ArcGIS Insights and recognized the benefits it could have for the department. He eventually took advantage of a free trial and began exploring the software's capabilities. ArcGIS Insights is designed for the analysis of spatial and nonspatial data, fusing location analytics with open data science.

ArcGIS Insights seamlessly integrated with Altoona PD's existing ArcGIS Online platform. Implementation was simple for Chambers because it is web-based software, allowing easy installation. Options are also available to use ArcGIS Insights on the desktop and with ArcGIS Enterprise. 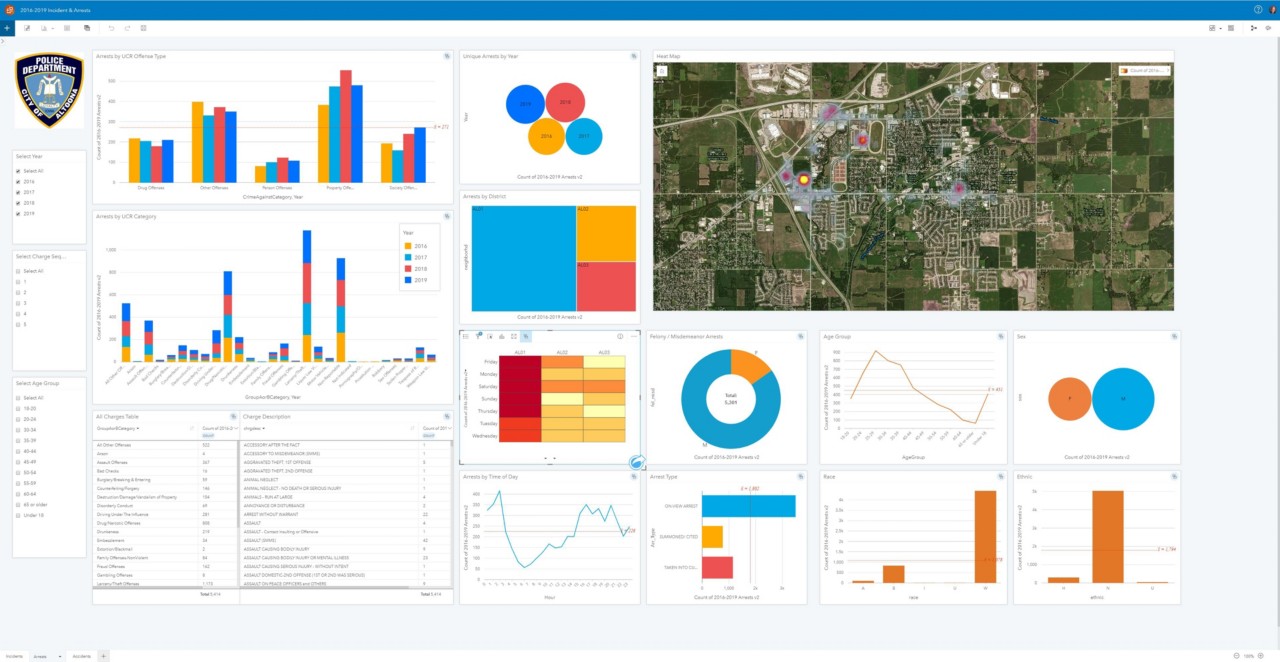 Annual report of arrests over a four-year period for comparison. Each metric on the insights page is selectable to filter the results based on the selection. This page includes Uniform Crime Reporting (UCR) offense type, category and charges, by year, day of week, time of day, type of arrests and demographics. The heat map shows the location of arrests.

Another added benefit of ArcGIS Insights was its ease of use, according to Chambers.

He explains, “I was looking for a system or program that we could put into place that anyone can use, that doesn't require you to have programmer skill sets or be an analyst. ArcGIS Insights fit the bill,” says Chambers. “[Police officers] should be able to access data in a way that they can easily consume and digest it to know what's going on in their districts.”

The capabilities it gave Chambers were superior, giving him the ability to perform different functionalities in one place.

“The aha moment was when I realized I have the power of location analytics but I can also build charts and data tables and do everything that I needed to do in pivot tables in a [spreadsheet program]. It basically brought those two worlds together into one place,” says Chambers.

The use of ArcGIS Insights has given Chambers the ability to produce dynamic reports and unlock insights from data. It has also given senior officers the information they need to make better decisions. First, ArcGIS Insights allows police officers to interactively explore data to understand what's going on in their districts and problem solve on their own.

Chambers purchased licensing that enables first-line supervisors and commanders to view and access data faster, an improvement from the old method of compiling data in spreadsheets and making it available only during monthly meetings. ArcGIS Insights enables Chambers to produce dynamic reports as opposed to static ones, which lets users engage with data and details.

"Instead of us getting together to view CompStat and identifying an area we need to look at, I expect that the district lieutenant already knows about what's going on in that area and is already working on a solution for the problem. The whole process becomes more efficient and fluid," says Chambers.

He adds, "I love Insights because it's a very effective tool that makes reports consumable and easily digestible [for staff], especially if it's a multipage report with charts and graphs."

Another significant benefit of ArcGIS Insights is the ability to uncover patterns and discover relationships in the data. Previously, Chambers would load data into a spreadsheet, update the pivot tables and pivot charts, paste pictures of them into a Word document, and then publish it. He says it was difficult to connect and find relationships from just static reports and maps.

"Data-driven policing is just a relentless analysis of data. So for us to be effective, we need to constantly reevaluate the statistical information along with the location information. And ArcGIS Insights allows us to do that much more efficiently and effectively," says Chambers.

Making edits to any of the visuals created in ArcGIS Insights, including maps and charts, is much easier with the tool. Chambers notes that it's much more efficient than it was with the previous method.

He explains, "I don't have to [import] the data into several different spreadsheets and then refresh. I can update the dataset in one place . . . and ArcGIS Insights updates all of the charts, tables, and maps."

Chambers says he looks forward to using more of the analytical tools in ArcGIS Insights and expanding its use. He adds that the data analysis and results help him with everything from making daily operational decisions to creating more strategic planning-type reports, all in one place.

"I appreciate that ArcGIS Insights is constantly changing. Esri is constantly making improvements . . . which gives us more functionality and features. So it really seems like the possibilities with it are endless," says Chambers. 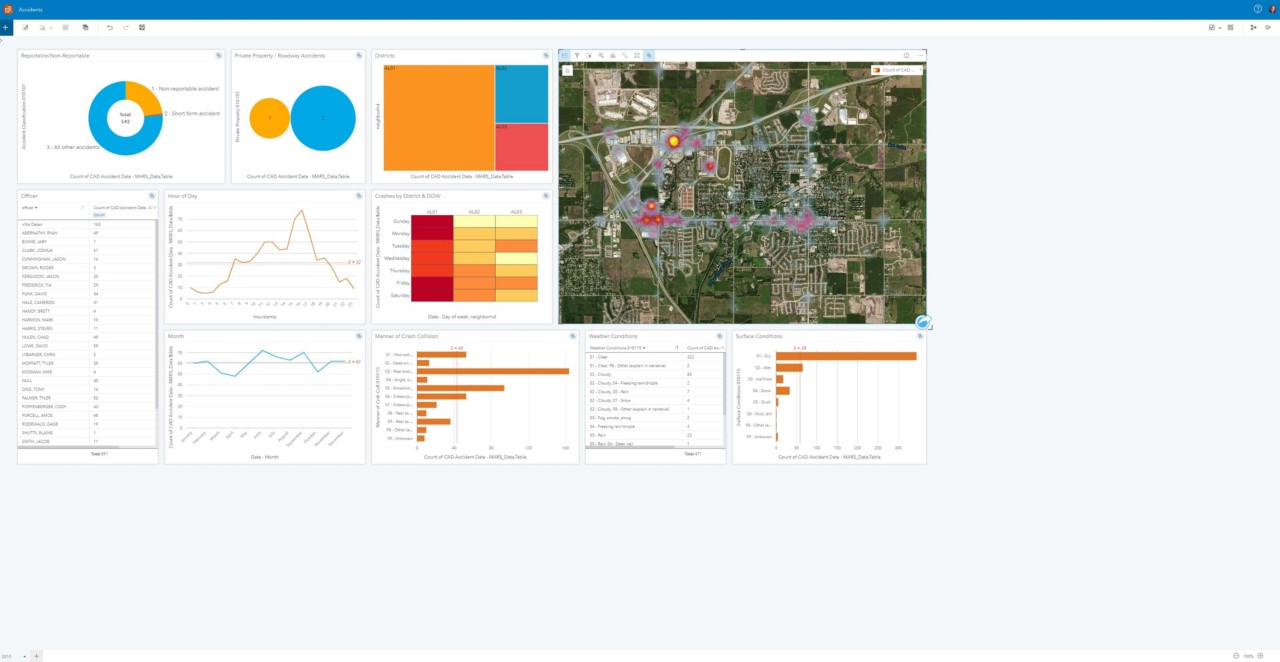 Shows the statistics of traffic accidents over a year period to find trends by month, day of week, time of day, districts, and area. Commanders can use this map to analyze a particular roadway or intersections and determine the type of accidents occurring in those areas. 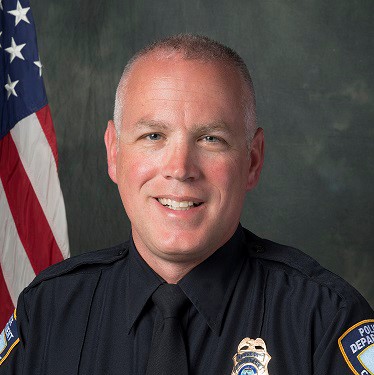 I love that ArcGIS Insights gives you the overall picture. It gives you all of your statistical information presented with charts and graphs, along with your location analytics in your maps. I can do everything that I need to do with ArcGIS Insights.

Get started with ArcGIS Insights

Outside the United States?
opens in new window