Belle Fourche Pipeline (BFPL) is a liquids pipeline operator based in Wyoming. Part of the True family of companies that operate in the oil and gas, transportation, and agriculture industries, BFPL gathers and transports crude oil throughout western North Dakota and South Dakota, eastern Montana, and Wyoming.

This process isn't always easy—from monitoring the flow of crude oil to maintaining pipelines, operators and field technicians need the best data and maps to successfully perform their jobs. To help make this possible and increase efficiency, BFPL began using digital, browser-based maps in 2014, but later the company needed a new tool specifically for geometry and tabular records editing as well as for management and visualization. To address these needs, the company implemented an advanced solution for custom web apps that streamlined production.

Results
A set of web applications for viewing and editing data and maps, each designed to address the needs of its intended end users

Before 2014, analysts were disseminating geographic information system (GIS) data by generating a map on paper, in a PDF document, or in a KMZ file after receiving a request for a custom map. These maps included details on landownership of where pipelines reside as well as records of the pipelines' maintenance needs. According to Conrad Stanley, a GIS server specialist for BFPL, these map products were not efficient for use in performing tabular analysis and were oftentimes expensive to produce, and they would quickly become out-of-date.

As part of the move to digitize map production, BFPL undertook an effort to transition to browser-based maps. As such, the company's GIS department implemented a browser-based system that allowed maps to be produced and displayed in a digital format. Staff took advantage of new tools to aid in this digitization. This new system allowed BFPL's legacy Silverlight digital map editing and production solution to be discontinued.

As a result, BFPL began its search for a new solution that worked similarly, right out of the box, to perform editing and management tasks such as layer rendering as well as measuring, printing, and searching. The ultimate goal, Stanley says, was "to make all information just a click away. The belief was that as more people got more information more quickly, efficiency would be increased.”

Stanley and the GIS team selected ArcGIS Web AppBuilder as their new solution for disseminating maps. They chose this product because of its powerful features and ease of use. Web AppBuilder enables users to create 2D web applications, including custom widgets and themes, with little coding required.

Stanley notes that using ArcGIS Web AppBuilder "was a simple replacement" to help GIS staff configure new apps. They took several different data feeds, whether in ArcGIS Online or ArcGIS Enterprise, and added them to a set of Web AppBuilder apps. These feeds vary from state parcel information and maintenance requests to pipeline tracks and access roads. Using this data, the GIS team created several apps for referencing map layers, each app being designed to address the specific goal of its intended end users. 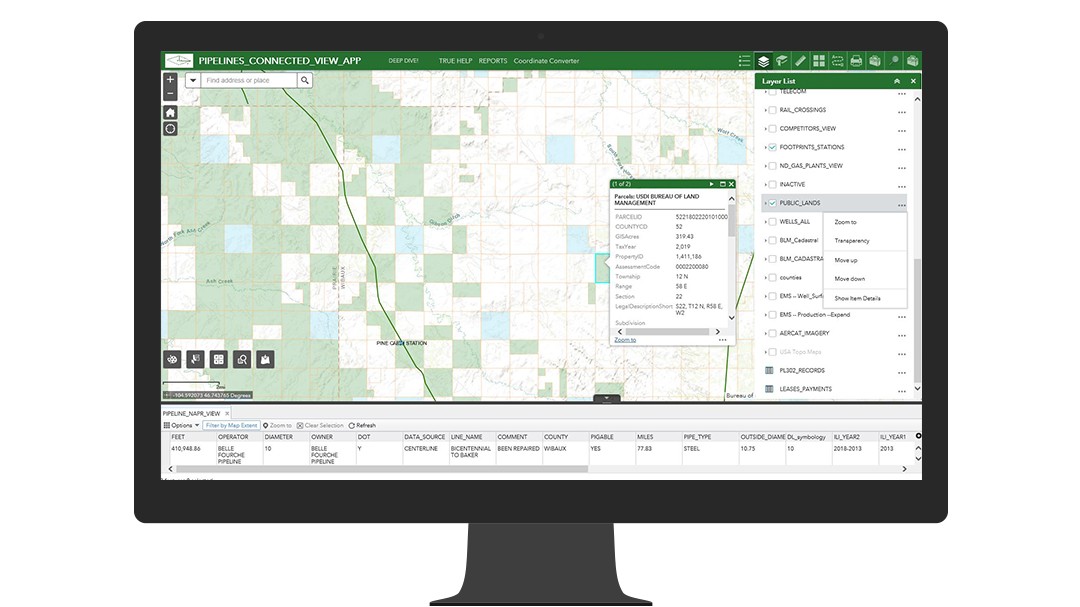 To get up to speed on the new tool, the staff attended training through a BFPL program called Lunch and Learn (a short training session during lunch) as well as more formal trainings at corporate and in field stations. As users have grown more familiar with the apps, their use has increased substantially. Approximately one-third of the users are senior-level administrators.

"I was tasked by [BFPL vice president] Tad True with making company data available digitally to various office workers at various levels. He shared my belief that up-to-date information readily shared would streamline workflows and thereby increase the profits, which Web AppBuilder has accomplished," says Stanley.

The use of ArcGIS Web AppBuilder has improved map production and the sharing of information within BFPL. One of the major benefits is that information is now available through feeds into the system; another benefit is that staff from all levels of the organization, including GIS and non-GIS experts, can easily access that information. Stanley says designated users can take and exchange their information quickly through shared folders. 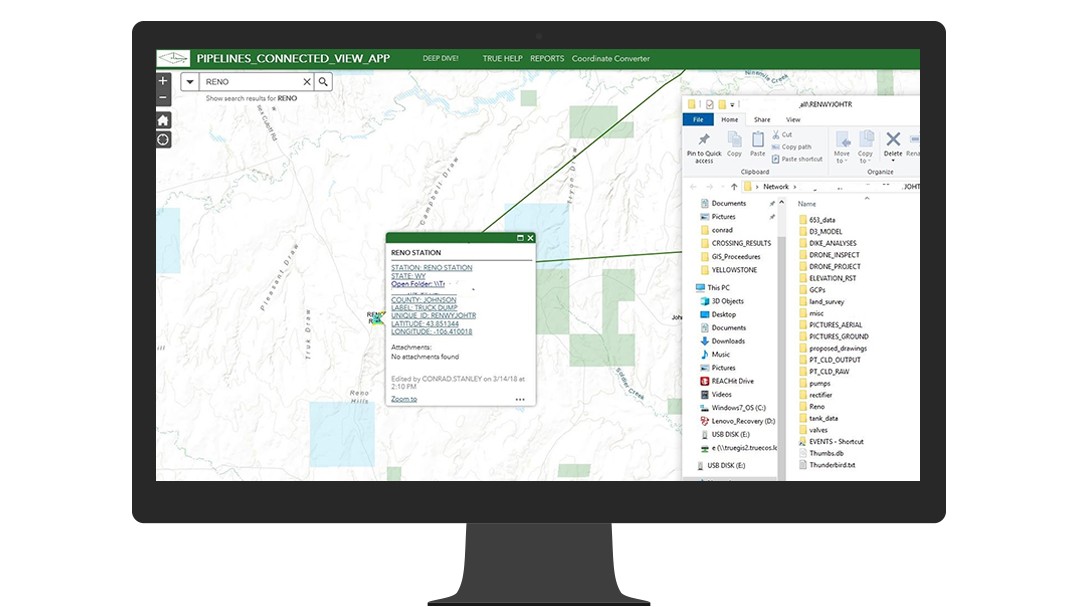 Users share data through a set of shared folders, easily accessible through pop-ups in the web app.

The solution has also enabled users to more efficiently edit data and maps, simplified the configuring of new applications, and made it easy to split up and allocate services. For example, an editor can now update tank records and easily keep track of when inspections have occurred. This user only edits data and performs tasks relevant to their role, eliminating potential errors and increasing efficiency. 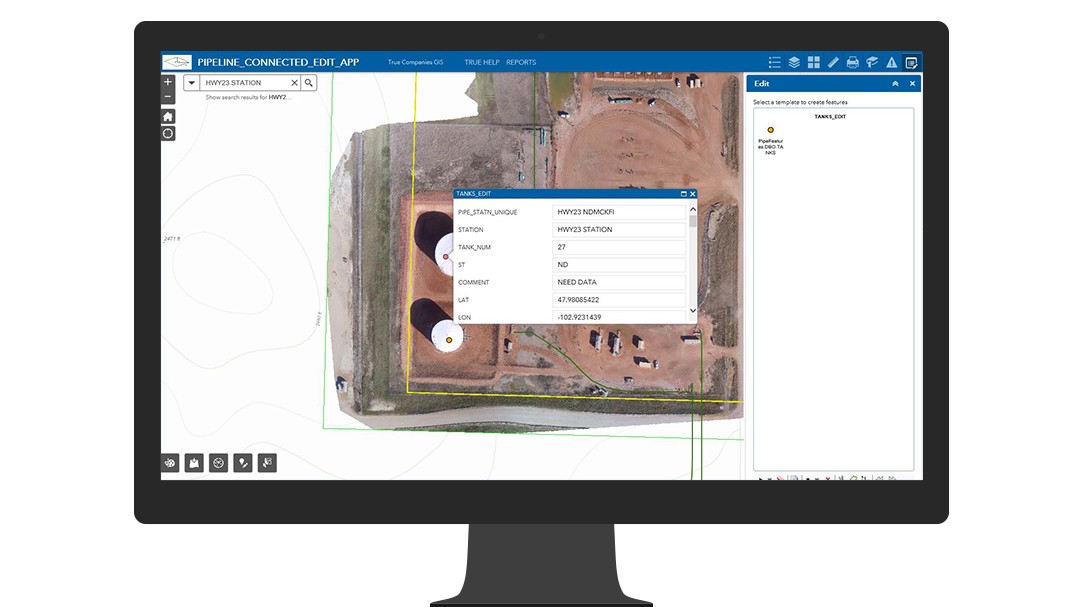 "We have much faster access to records. Staff are getting just the information they want, and they don't have to do much to update or change it," says Stanley. "That's where Web AppBuilder is very handy. We have all these tools and widgets that we can use in a map that anybody can operate with a little bit of training."

He adds, "There are lots of widgets now that would have taken me a long time—or years—to write. Now, [staff] can just pick them out of the box [and] configure them, and they are often ready to use." 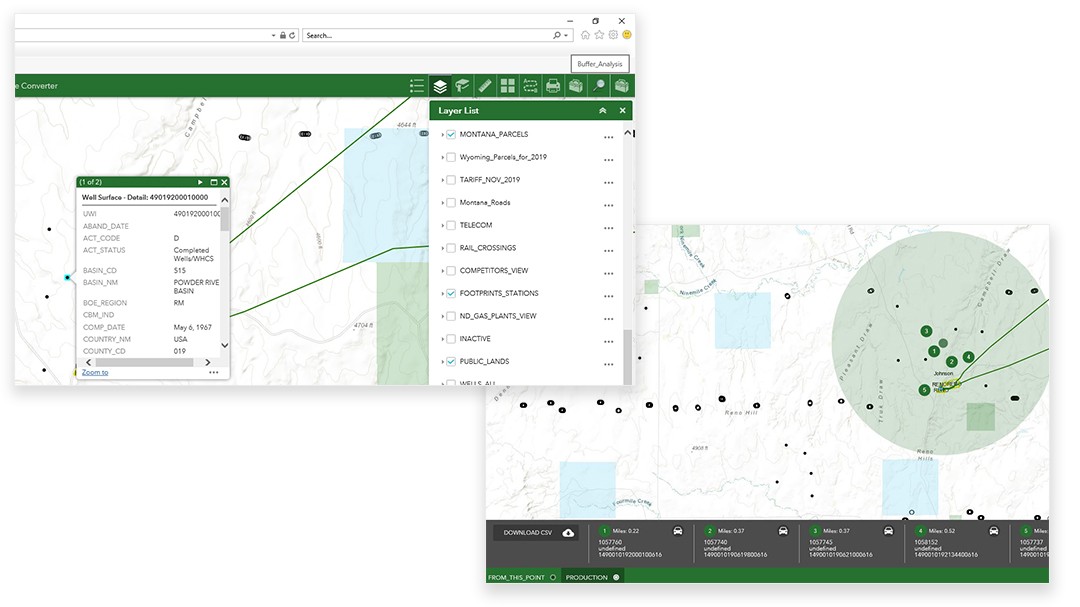 Performing buffer analysis using an out of the box widget, configured to export well data.

Since the implementation of Web AppBuilder, and as staff grow more familiar with the online maps, Stanley says the demand for paper maps for simple or routine tasks has decreased. Certainly, paper maps will still be necessary for reporting or other mandates, but the digital delivery of maps has led to significant cost savings in different areas—for example, reduced costs for printing maps.

Staff from various areas of the company are using Web AppBuilder, including senior executives; engineering, land, and exploration staff; and field crews. Examples of apps deployed include the following:

The use of Web AppBuilder has garnered positive feedback and given staff the tools to do their jobs more proficiently, delivering superior results for BFPL.

ArcGIS Web AppBuilder has been a tremendous asset in helping us digitize our map production. Users from across our organization can better collaborate and share data.

Conrad Stanley, Belle Fourche Pipeline
Special thanks to my GIS Team (Jessica Beyer, Jack Murray, & Steven Brand), whose help made this a reality.

Create web apps for your organization