Raleigh, North Carolina, is home to North Carolina State University and several technology and educational institutions in the area known as the Research Triangle. The city of more than 460,000 people often ranks in the top livable US cities and continues to grow its economy and population.

Staff from the municipal city's IT department and GIS division work across 20 departments to share data and collaborate on city projects. Through innovative use of ArcGIS technology, they have overcome data silos to improve collaboration and decision-making.

"Cities are complex organisms," said the city's GIS and Emerging Technology Manager Jim Alberque. "If you can just break down some data silos, you see that there's huge value in data across business units and disciplines."

For years, staff from the City of Raleigh struggled to consolidate data from 20 departments within the municipality. From procurement to parks, data was in individual dashboards set up by separate business units with no visibility across information and assets used by each team.

The main challenge Raleigh faced was that the city's various departments, or business units, were independently implementing new technology but not sharing their processes or data.

"Could that business unit just operate on its own and do its own thing? Yes. But from a citizen perspective, you really want your agency to be working better across groups," said Beth Stagner, Interim Chief Information Officer and Enterprise Applications and Data Director.

For example, crime isn't just a police problem—it impacts other departments. Holistic questions must be asked, such as, Does the city lack parks and recreation programs in that area? Or affordable housing?

"There's a bigger conversation about some of these things," Stagner said. "And that's the same thing with the data. If it is pigeonholed within one little business unit and nobody else can leverage it or even know about it, then it's not doing the good that it can do across your organization."

About six years ago, city leaders started to develop strategic plans for a more data-driven management style. In 2013, new city manager Ruffin L. Hall, a self-described "numbers guy," began to foster an environment welcoming data consolidation and collaboration, which in turn attracted key managers across the city who shared his view.

Stagner explained that a lot of work in municipal government involves a geographic aspect, making GIS the tool of choice in Raleigh to keep pace with the city's changing needs.

For example, in 2016, the city's water utility implemented automated vehicle location (AVL) across its fleets to track vehicles. But that vehicle information was in its own dashboard, separate from other information about the utility network. Raleigh used ArcGIS GeoEvent Server and ArcGIS Online to track the vehicles and show other related data such as work orders, condition of valves, and status of assets.

Stream gauges from City of Raleigh

Similarly, in 2013, the city deployed the Bigbelly smart trash system to be more efficient in trash pickup. The Bigbelly is a smart, compacting trash can that captures and relays details on its trash cans in real time. In 2019, Raleigh leveraged GeoEvent Server to automatically open work orders whenever the Bigbelly reported an issue or that a trash can was full. This was previously a manual process for city workers who would drive the route to spot a full or damaged trash can and then send a work crew to handle the problem.

In another example, the city's emergency manager had to make a decision about pulling city staff off the streets when wind speeds reached more than 35 miles an hour. Someone in the Emergency Operations Center (EOC) had to log in to a National Oceanic and Atmospheric Administration (NOAA) website every 15 minutes to check local wind speeds. With GeoEvent Server, the city was able to use an API to plug a widget into the operations dashboard in the EOC to routinely track wind gusts.

"GeoEvent is a foundational piece of much of the technology we build. It's obviously behind the scenes, but it helps enable some of this stuff," said Alberque.

Leveraging the real-time technology of GeoEvent Server has been crucial to improving efficiencies across different business units in the City of Raleigh. As cities collect increasing amounts of data from instruments and sensors, GeoEvent Server makes that information available and useful.

"Cities are complex, and in order to understand the city, we need to get visibility into how the city works," said Alberque.

In the case of Bigbelly trash cans, the city wanted to leverage the real-time data coming from the trash cans and monitor it on a real-time map that could automatically trigger work orders when needed. This ability saves the time it takes to perform a manual intervention of creating a work order.

Using GeoEvent Server to pull real-time weather data from NOAA has also saved “100 percent” of time spent by the person who used to manually check wind speeds every 15 minutes.

"Esri technology has really been such a fundamental key pillar of IT for us," Stagner said. "And it's one thing for IT to realize that it's a pillar, I think now the departments realize how foundational [GIS] is to the work that they do."

GeoEvent Server was also instrumental in Raleigh's move to single sign-on for 450 users on all its enterprise applications last year. One of Alberque's team members came up with the idea of automating the migration with GeoEvent Server. In the past, a user would have to manually email the team every time to set up a new account. Now, Alberque's team can use webhooks and GeoEvent Server to automatically migrate user content to new accounts and delete old accounts once the new ones are set up. 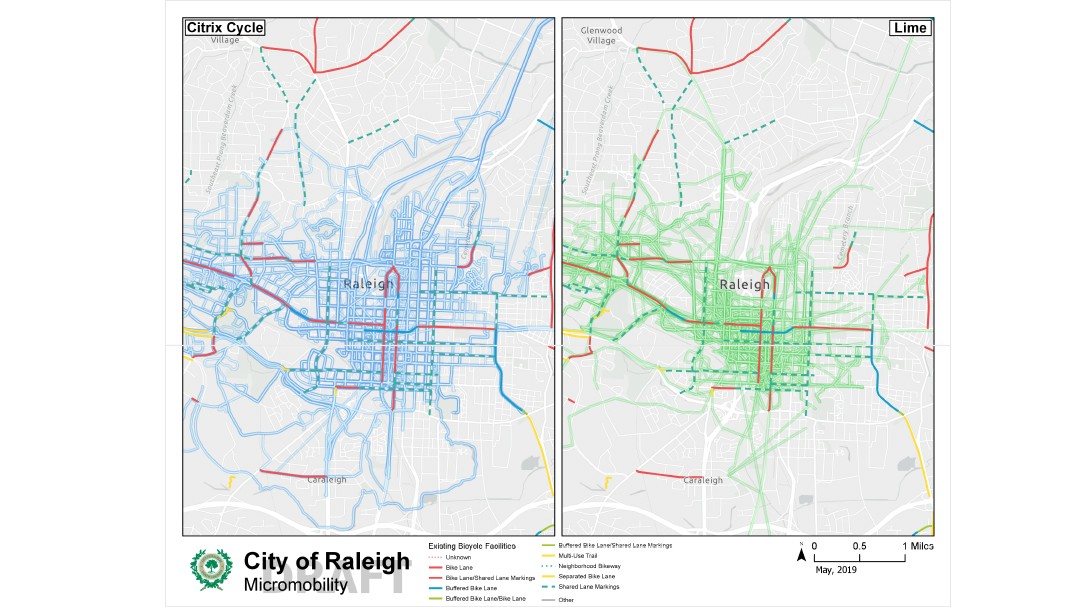 Micromobility usage from City of Raleigh

The city continues to explore ways to improve processes. One effort around micromobility involves using GeoEvent Server to push dockless scooter data into big data stores to visualize how people are moving around the city.

Another effort is working with Esri's machine learning team to better understand traffic patterns. The teams built a workflow that analyzes data from traffic cameras to count cars and capture their movements. This data collection is currently done manually by contractors that go to intersections to count cars. If this process is automated with cameras, "that represents a huge cost savings to the city," said Alberque.

On Raleigh's commitment to Esri technology, Alberque said, "One, [Raleigh] fundamentally understands the value. Two, our IT leadership identified it as a foundational technology. Three, it's just good technology. It is modern, flexible, powerful, usable, all those things that you look for in a system."

GeoEvent Server is a foundational piece of much of the technology we build.