Each year on April 22, people from around the world celebrate Earth Day, an important tradition that began in 1970 when 20 million people gathered in the streets across the United States to protest some of the ill effects of the Industrial Revolution. A movement to preserve the planet for future generations was born, and as the world continues to face significant challenges such as global warming and deforestation, people are thinking up new ways to make a positive impact.

In honor of the 50th anniversary of Earth Day, a diverse collective of organizations—spearheaded by the US Department of State, Earth Day Network, and the Wilson Center—came together in support of a new initiative to help clean up the planet. The group set out to create a mobile application to engage the public to collect billions of data points for new and ongoing citizen science projects.

GeoMarvel—an Alexandria, Virginia-based geospatial software development company that specializes in geographic information system (GIS)-focused cloud infrastructure, data analysis, and mobile application development—was tasked with designing the app. GeoMarvel built the mobile app in ArcGIS AppStudio, an easily configurable and scalable cross-platform software. AppStudio allows for the creation of mobile data collection widgets that can be deployed directly to the app, enabling hundreds of thousands of users around the world to collect and submit data.

The GeoMarvel team faced a unique challenge. Nordling says they received app concepts and had an idea of outreach but had no underlying mobile solution that integrated seamlessly with geospatial technology. With the intent being that new research questions would be added continually, the app needed the ability to scale quickly and effectively, all while incorporating geospatial components to gather accurate location data.

The conventional methods used to build mobile apps are time-consuming and involve numerous steps. For example, Nordling says, adding a component to an app would likely involve updating specific code, adding assets, increasing the version, building a new file, and going through an app store review process for each change to the application.

GeoMarvel needed a solution to streamline the development of the app in order to provide an easier way to introduce features for data collection.

GeoMarvel chose ArcGIS AppStudio to build the new Earth Challenge 2020 app. GeoMarvel selected AppStudio because of its technical capabilities. AppStudio is a low-code platform that allows users to create geo-enabled cross-platform native apps. According to Nordling, AppStudio allowed the GeoMarvel team to easily deploy the app and get to market faster, enabling users to begin data collection sooner. In addition, deployment on ArcGIS AppStudio Player enabled the app to be used on both iOS and Android.

"From a mobile application development standpoint, the underlying inner workings of AppStudio Player were the real reason that we chose AppStudio," says Nordling. "AppStudio gave us the ability to create geo-enabled [data] collection widgets without having to go through many technical hurdles to get there. It seemed like a really good fit."

Also, as a member of the Esri Partner Network—which connects organizations to the global GIS and mapping community—GeoMarvel selected AppStudio because of the company's partner relationship with Esri. Nordling says, "All tech aside, the biggest reason we chose this application is because we have the confidence as an Esri business partner to rely on the software [Esri builds]."

He adds, "New technical challenges are coming every single day. So if we hit a roadblock, we've got a great partner relationship with everyone at Esri to reach out to if we need support."

The GeoMarvel team initially created two widgets within the app, one focusing on plastic pollution and the other on air quality. Kevin Cheriyan, an application developer for GeoMarvel, says the online resources for AppStudio were very helpful in creating the Earth Challenge 2020 app, including documentation and the ready-to-use templates in the AppStudio template gallery. 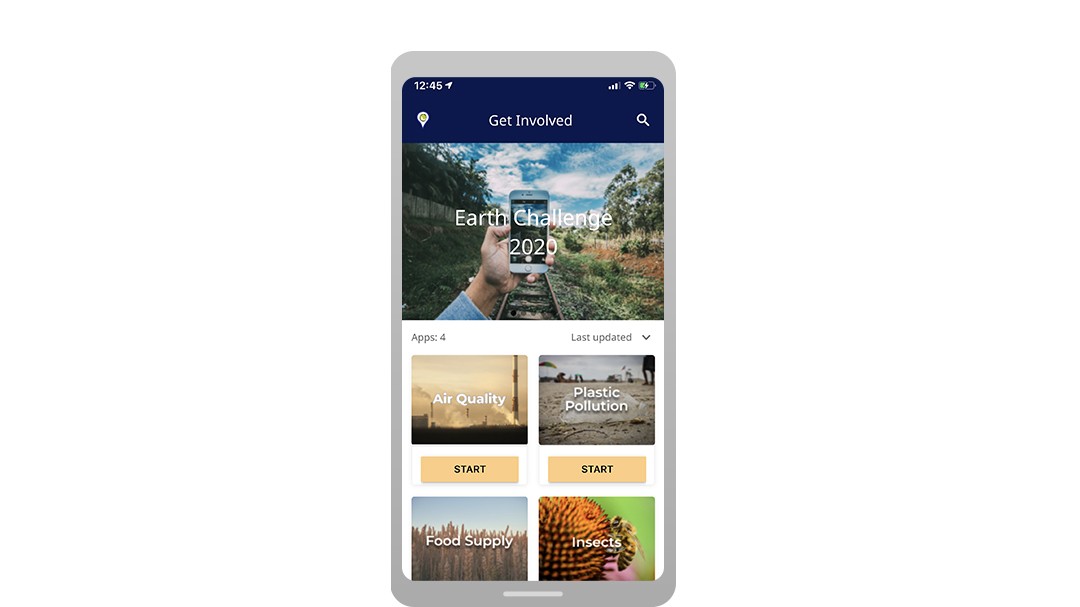 The home screen of the Earth Challenge 2020 app where users can choose which environmental issue they will be collecting data about.

"We were able to utilize [the templates] to our advantage and see how other robust applications were using recommended code," says Cheriyan. "We also had to be familiar with the documentation on Esri's ArcGIS framework sections and general AppStudio tutorials. Along with the templates, I think they really helped us take the app to the next level."

The way the app works is simple: users select the research question they want to participate in and then submit relevant data, such as a photo of plastic pollution along with the type of plastic identified. Nordling explains that users unlock different features and functionality on the application as they continue to participate. There is also a "take action" part of the app that allows users to create awareness around the data they've collected and sign local, geo-enabled petitions that have been configured for the application.

Using AppStudio to create and deploy the Earth Challenge (EC) 2020 app has allowed the GeoMarvel team to easily add features, functionality, and research questions. This is empowering the team to introduce citizen science to a new generation of users. Several thousand people have already begun to collect data points all around the world.

"[For future research questions] AppStudio was very compelling in the sense that we could control releases through group share settings in ArcGIS Online and say, 'We're ready to deploy Air Quality now. Let's go ahead and share that [publicly] in AppStudio Player,'" says Nordling. "Anyone with the EC application automatically gets the updates."

This allowed GeoMarvel to issue rapid fixes for bugs. Corey Norris, business operations manager for GeoMarvel, says, "We now have an application that allows us to dynamically create and deploy [new widgets and updates] to users at any time. That's really powerful."

AppStudio also gave the team the ability to quickly test new features and easily discard them if needed. Harman Hassan, an application developer for GeoMarvel, says, "Speed was very helpful with this. So we would be able to build out different features and tools and quickly test to see whether we like them or not. If we did like [one], we kept it. If not, we removed it."

Hassan continues, "And then we went back and added more on top of what we already built. We would work all day, put out a release, and then test on Android and iOS. This capability was my favorite part of using AppStudio."

Nordling echoes this sentiment, stating that the group loved the ability to write some quick code and then throw it away if necessary. "We didn't feel bad about doing that because there wasn't any technical debt that we were losing," says Nordling. "And our turnaround for new features is better because we can redo things without having to impact every little piece of the application. The functionality is targeted."

Users of the app have noted how user-friendly the experience is, an added benefit of AppStudio, says Hassan. 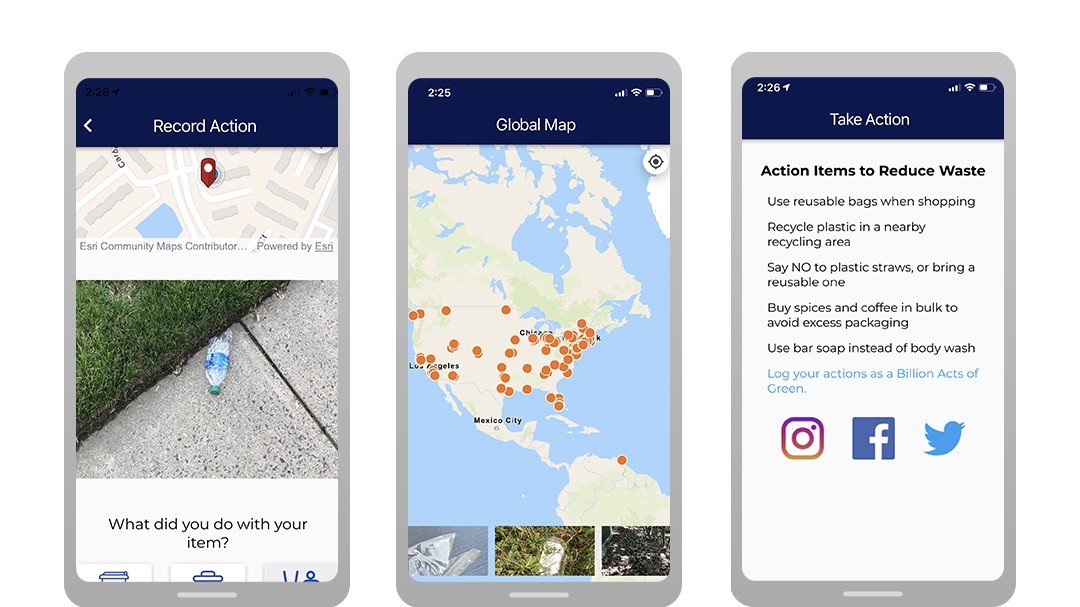 Using the EC app, users snap a photo, pin it to a location, and become part of the global initiative.

"When my nontechnical friends have used the app, they would be able to easily take a photo of the sky, submit their data, see their point on the map, and click it to immediately see their image pop up. They have an interactive map on their mobile device that's simplified," Hassan says.

He adds, "I think that helps encourage people to go out there. You're not just collecting data, sending it off, and then not seeing anything. You're seeing data come in from people around the world, which reinforces the fact that you're part of this bigger cause."

Nordling says the team has received lots of positive feedback since launching Earth Challenge, and there are plans to introduce research questions focusing on issues like clean water, food quality, and insect population research. Ultimately, he says the goal of this initiative is to collect data in order to understand the planet better and that the project will likely be ongoing because there are always "new problems to solve in the world."

"It's not only about building the technology; it's about knowing what's coming and what's possible for the future of this application and initiative. This is about building an application for users to participate in an ongoing, long-term citizen science effort," says Nordling. "I hope it's a project we're a part of for a long time." 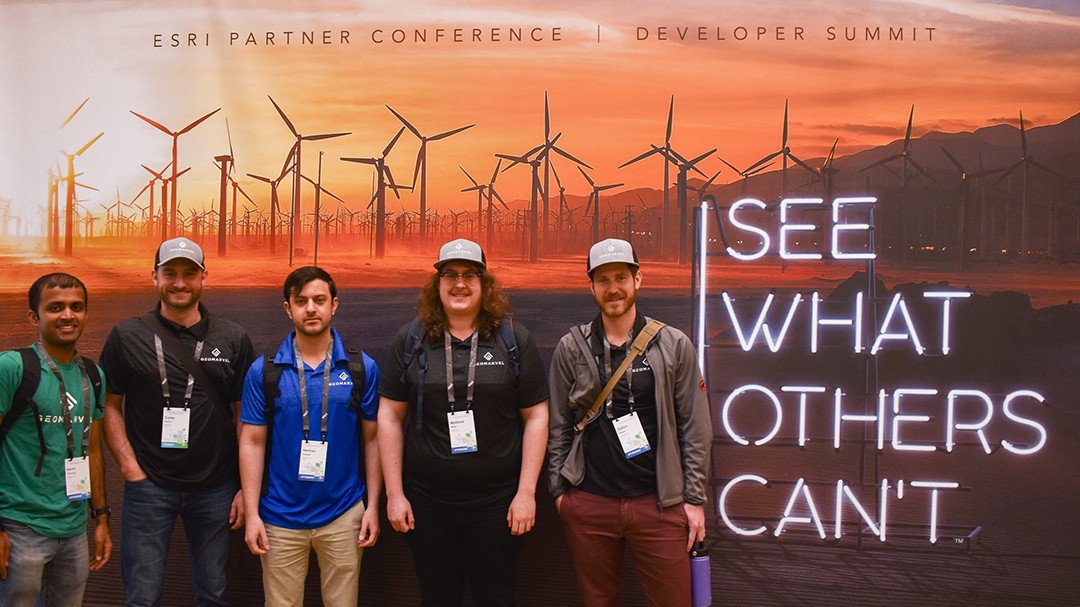 The GeoMarvel team at the Esri Partner Conference and Developer Summit. 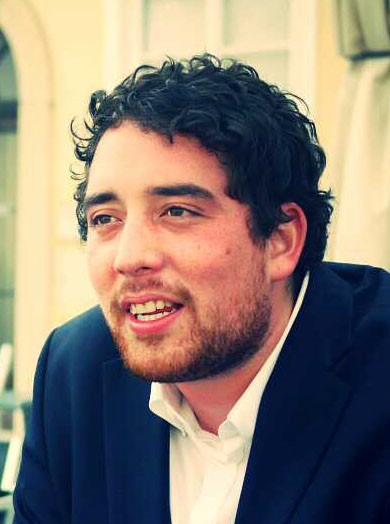 Making citizen science into an application isn't easy—not from the design, concept, or build. AppStudio has absolutely met the needs of the project, and using this technology has been a great decision. The feedback has been extremely positive.