From its sweeping mountains and gentle streams to diverse coastal wetlands, Maryland has a vast array of natural resources. Many 21st century threats like pollution and a warming climate put the environment at risk, but state and local agencies are working to combat these dangers and preserve their natural resources for years to come.

One such threat is invasive weed species, which are plants that are harmful to agricultural or horticultural crops, natural habitats or ecosystems, or humans or livestock. These invasive weeds are difficult to eradicate and control and are an increasing threat to the state's ecosystem. The Maryland Department of Transportation (MDOT) State Highway Administration (SHA) has an initiative aimed at removing invasive weed species.

As part of this initiative, MDOT SHA captures an inventory of noxious weeds along Maryland roads and tracks the progress of weed spraying operations. Weed spraying crews capture data in the field daily during Maryland's growing season from April to October.

MDOT SHA's challenge every year is to combat invasive species across the State of Maryland to minimize their impact on Maryland's native plant species. MDOT SHA was tasked with providing metrics on how well the agency is mitigating invasive weed species year over year, using this data to do a comparison from year to year. For example, if the excessive presence of Johnson grass was detected in certain areas, the agency would want to prioritize its reduction the next season.

The agency was not able to accurately measure and track the extent of weed infestation or fieldwork performed, so it looked for a more streamlined way to collect and analyze field data from season to season.

The initial method of data collection involved the GIS team creating 11" x 17" paper map books for the crews to take with them in the truck. Crews would mark where they observed weed growth on the map and notate patches of vegetation along each corridor. The paper map books would then be returned to the office, and GIS analysts would have to transcribe the marks to create a GIS layer.

According to Craig Mackowiak, Division Chief for the Data Governance Division, this manual method was inefficient.

"This method of data collection was very cumbersome and labor-intensive, as you can imagine," Mackowiak says. "Not only interpreting what was being written but just the translation of that ink and paper to an actual shapefile or map product."

Under the direction of the MDOT SHA's Data Governance Division, who oversees MDOT SHA's GIS operations, the team set out to find a new solution for streamlining their data collection.

The GIS team identified ArcGIS QuickCapture to pilot a new mobile solution for their colleagues at MDOT. ArcGIS QuickCapture is a field data collection app designed to support field teams with simple and fast data capture on devices like a cell phone or tablet.

Stevenson notes that because the database was already built, it made for an easy conversion because a lot of the components already existed. The GIS team just configured the different interfaces and pulled in the existing data elements. He says, "Creating the application is probably one of the easiest things to do with ArcGIS QuickCapture because it is so simple."

According to Stevenson, field crew training was not needed because "once it's installed in the device, they're pretty much ready to go."

"ArcGIS QuickCapture is pretty straightforward [when you're] looking at it. We haven't needed to create any user guides for it, because what you see is what you get," says Mackowiak. "From a management perspective, the fact that we don't have to teach all of our customers how to do GIS is a huge deal."

The GIS team designed the app to be easy to use with large stop and start buttons for functions like collecting, spraying, and not spraying. The app also includes the option of selecting what noxious weed is being treated.

"The user is selecting the button, they get the audio prompt, they hit it, it's flashing, and it's done. It had very minimal uptime in getting them to use it. It was a much more intuitive solution for a nontechnical person," Stevenson explains.

He adds, "We try to keep it as simple as possible because we feel that it's going to be a sustainable solution for the future. [We explain to users] that this is what you used to put on a notepad, but now you can pull over, take a photo, and it automatically grabs a point and location." 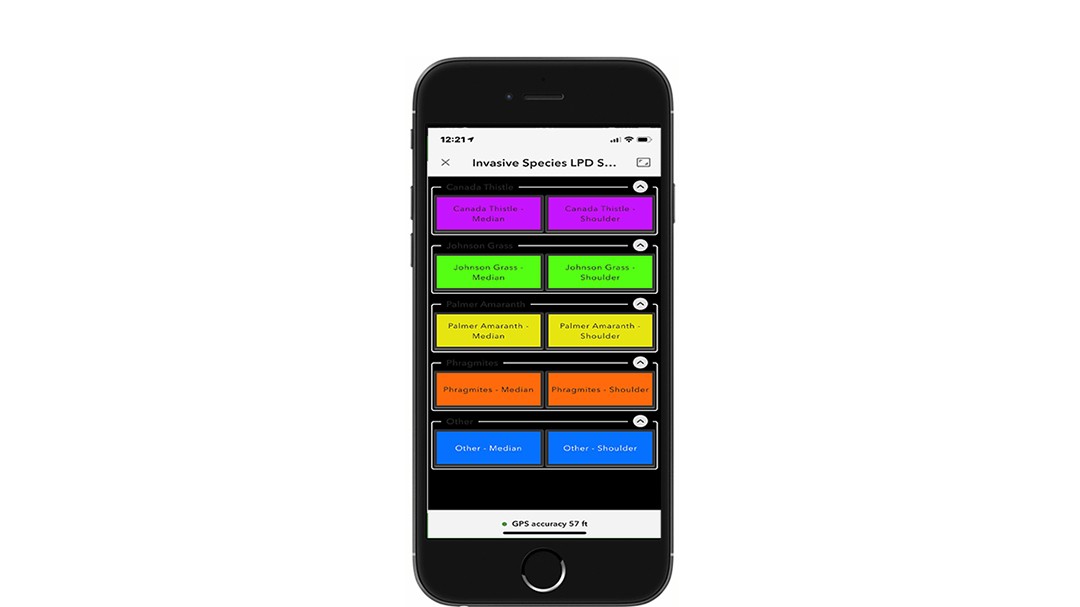 MDOT SHA has been using ArcGIS QuickCapture for two seasons and has realized significant benefits, including improved data collection and time savings. The user-friendly system of ArcGIS QuickCapture has been a tremendous benefit, says Stevenson, simplifying operations for users.

"We went from multiple iterations, including paper and ArcGIS QuickCapture, and we're always trying to find ways [to simplify things] from a user standpoint. If we can make something that is actually fun for some of these users, then they are more receptive. And they're finding it fun to capture data with ArcGIS QuickCapture."

The streamlined operations have also saved time for staff, allowing them to focus on other things. Mackowiak explains that the GIS team previously had to allocate an entire full-time group to convert the data from the paper map books to a GIS format that could be input into their enterprise. Now, with ArcGIS QuickCapture, the GIS part is done.

"Data collection is so instantaneous. Now we can spend our time doing the analytics, analyzing the data, and seeing what the trends are between the different seasons," says Mackowiak. "We can spend more time getting value from the data instead of just collecting the basic information."

He adds, "Once the QuickCapture tool was launched, it seemed almost like it was designed for this effort [with easy] start and stop buttons. Field crews just had to know when they started spraying and when they stopped. We didn't have a platform that fit this need until we found ArcGIS QuickCapture."

Results are delivered rapidly with ArcGIS QuickCapture. Stevenson says that many years ago they spent anywhere from six months to a year (and a lot of money) to build tools to help address a specific issue such as this one.

"Ease of deployment is key. In the past, we couldn't get solutions for our users quickly enough. Now we have the opportunity to get something into their hands to go out and start collecting data—literally within hours," says Stevenson.

For MDOT SHA, more rapid data collection also translated to faster analysis. Stevenson says valuable data is no longer just sitting in a truck on a notepad and potentially being forgotten. It can quickly be transmitted via the app and monitored by staff back in the office.

The accuracy of data has also greatly improved with ArcGIS QuickCapture. Mackowiak says the GIS team no longer needs to interpret people's drawings on a piece of paper, making data more accurate and analysis more efficient.

Mackowiak notes that every step forward they've made with this program has been met with positive feedback. "We keep getting better, and we only keep getting better because of the platform. It's increasingly easier to use and better to work with," he says.

"Our users are impressed. They keep coming to us because we can deliver data collection solutions quickly—ArcGIS QuickCapture is that intuitive and easy to use."