Vancouver is a coastal seaport city in British Columbia, Canada, with one of the densest populations in the country. To proactively protect the more than 600,000 residents and solve crimes, the Vancouver Police Department (VPD) combines innovative crime prevention techniques and traditional police work to go “beyond the call” and deliver a superior level of service.

While key police work is first done in the field, a crucial part of all investigations is conducted behind-the-scenes at headquarter offices, including research and data analysis. One important piece of the investigative process involves warrant-obtained data, which in some cases contains GPS coordinates and network details when the records relate to mobile devices.

The mechanism in place at VPD for processing mobile device data for investigations was time-consuming and in some cases police officers were limited in their ability to conduct this work due to the requirement for advanced technology and training. The VPD examined a variety of solutions and were particularly interested in those that integrated with their existing infrastructure. The solution they selected empowered officers to perform basic GIS work and get the answers they need faster.

Although there are 1,700 police officers at VPD, only 24 civilians are designated as crime analysts who have access to desktop mapping software for data analysis and building maps. These analysts perform advanced mapping functions such as spatial or temporal analysis as needed for police investigations and to support police crime prevention strategies.

The previous process at VPD meant police officers with no access to mapping software must ask for assistance from an analyst, given the highly technical nature of the software and the advanced training required. The crime analyst would typically take the spreadsheet, plot the warrant-obtained data on a map, zoom into the area in question, and provide specifics related to the spatial-temporal patterns they identified.

After a police officer receives this and continues with their investigation, they will likely have more questions, leading to additional exchanges with the crime analyst. Depending on the nature and complexity of the investigation, this process could be quite lengthy.

“This was not the most efficient use of a crime analyst’s time because they have specialized skills more suited to advanced tasks. This type of request [that consists] of plotting points on a map and filtering the data to get answers should be able to be performed by non-analysts,” says Betty Ling, Senior GIS Coordinator, Vancouver Police Department. “Especially because in a police environment, it is critical that our information is provided in a timely, reliable, and accurate manner.”

Additionally, officers had challenges finding what they need in the data due to file size and formatting. Warrant-obtained data is typically received in a raw data format, specifically a delimited text file that contains a multitude of fields in a mixed layout. Analysts use a customized macro in Microsoft Excel that formats the raw data in the delimited text file and converts it into columns so it’s more readable.

Furthermore, reviewing geospatial data in a table format hinders the ability to comprehend the significance of the points in relation to each other and does not reveal the underlying patterns in the data.

According to Ling, “The table doesn't really tell them, ‘well, I'm looking specifically at this intersection or this buffer distance of an address, what are my mobile devices around the area in question at a certain date and time?’ They can't see that through the Excel spreadsheet.” 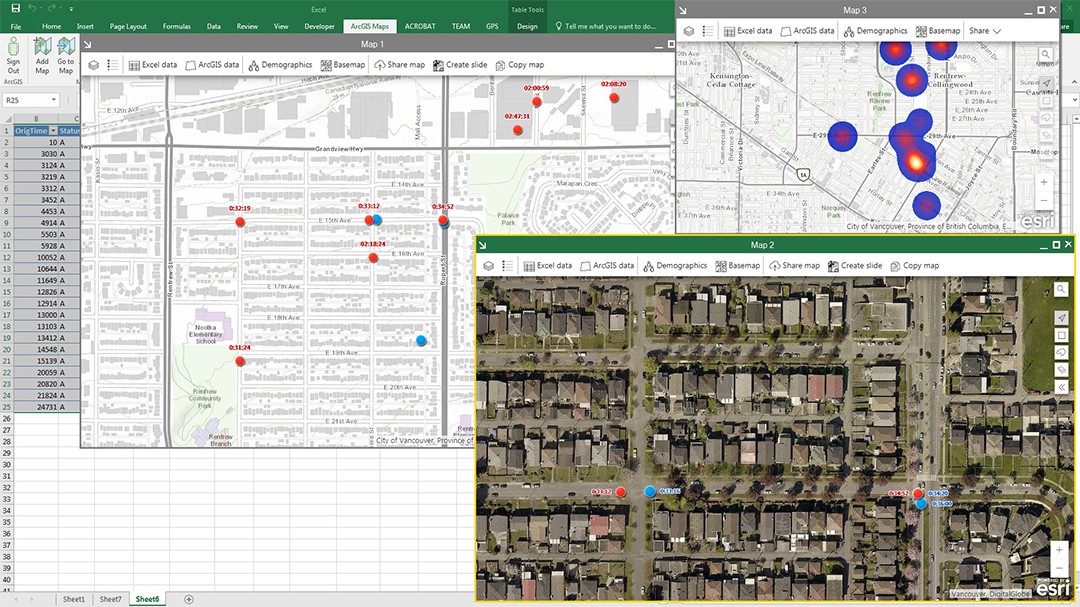 Enable police officers to conduct their own GIS analysis for investigations

Police officers are able to get the data they need faster, improving the speed of investigations and allowing crime analysts to focus on advanced GIS analysis

The Crime Analytics Advisory and Development Unit (CAADU), which is the unit where Ling is the Senior GIS Coordinator, investigates and looks at advanced technology to help civilians and police officers conduct investigative processes more efficiently. To find a more efficient means for officers to analyze warrant-obtained data, Ling says her unit conducted a workflow assessment to determine what available technology could streamline this process and give police officers easy tools to use in their investigations. They specifically looked at what technology they had in-house and what would easily integrate with their existing infrastructure.

After their review, the group eventually selected Esri ArcGIS for Office. ArcGIS for Office is a plug-in for Microsoft Office that allows users to create interactive maps for spreadsheets and presentations. Ling wanted simple technology to make it easier for police officers to learn and a solution that would integrate with Microsoft Office, which the officers use and are already familiar with. Another consideration was selecting a solution that did not introduce another new product that needed specialized technical support and additional training for staff within the Department’s Information Technology Section.

“Police officers already have specialized law enforcement applications that they have to be trained on, so we didn't want to introduce an entirely new software for them,” explains Ling. “So, they already know Microsoft Office, and the solution was a simple plug-in for a product that they had previously developed a working knowledge of. They just click the ArcGIS Maps tab, sign in, and plot points on their map.”

An added benefit of using software that works with their existing technology is that it can be used anywhere. Officers typically don’t have a designated desk at VPD headquarters to do their investigative work or may work out of a satellite office, so having ArcGIS for Office accessible with just their sign-in makes it easier for officers to access work no matter the location.

Ling created a simple user guide for officers that includes the basic functionality of ArcGIS for Office. No special training was needed because of the officers’ familiarity with Microsoft Office and Ling notes the officers began using it immediately. 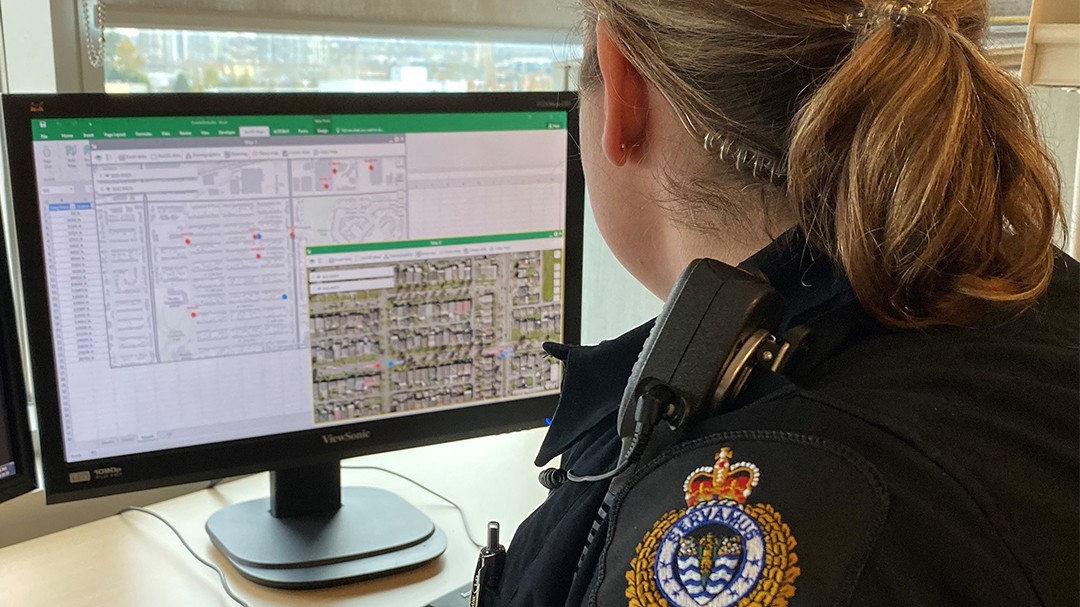 The deployment of the mapping solution has yielded positive benefits at VPD, including cost-savings and streamlined police investigations. First, the use of ArcGIS for Office didn’t require any additional software to purchase because it was a plugin for software already in use. This allowed the VPD to maximize their current investment in GIS technology and save money.

“We found that it empowered our officers to become more self-sufficient. They went from having no mapping capability to doing some light mapping and analysis,” says Ling. “It boosts their confidence in using technology and GIS.”

With the new solution deployed, officers sign into ArcGIS for Office and filter the data in Microsoft Excel. Once the officer narrows down what they need, the data (points) are plotted on a map. If needed, they can then refilter the data and zoom in and/or out on the map to conduct more detailed analysis of patterns.

“Police officers can visualize the data, the table, and the raw data in new ways, and it helps them to uncover hidden patterns,” says Ling. “They’re not just plotting points on a map. They're applying some of their analytical skills [to this task] in order to solve the case.”

Ryan Prox, the S/Constable in Charge of CAADU, adds, “We are pushing the boundaries for front-line police officers having access to cutting-edge technology solutions that increase operational effectiveness and help to maintain the tempo of active investigations.”

ArcGIS for Office provides detectives with the ability to jump into GIS analysis with minimal training and generate quality results that support intelligence-led policing.

Learn more about ArcGIS for Office