The National and Kapodistrian University of Athens (NKUA) was the first university established in Greece and the first higher education institute in the Balkan and Eastern Mediterranean areas. Since its founding in 1837, NKUA has grown to offer more than 300 programs to the 68,500 students currently enrolled and collaborates with 466 universities in 62 countries to enrich academic studies and research.

NKUA stays at the forefront of higher education in numerous ways, including offering the first university programs in Greece designed exclusively for international students where all courses are taught in English. The bachelor's and master's programs in archaeology, history, and literature of ancient Greece include courses in Greek history and culture. The programs require students to interpret complex sets of data. These datasets often come from various physical and digital sources, making them difficult to collect and analyze.

In 2018, NKUA archaeology professors Kostas Kopanias and Dimitris Plantzos set out on a mission to create the first large digital repository of curated archaeological data for the Mediterranean area. Their goal was to make a vast amount of scholarly data—from books, maps, museums, websites, and other educational institutions—easily accessible and geographically referenced.

Historically, archaeologists have not had access to an aggregate source of information nor a method that allows for easy analysis of complex datasets. Conducting research often includes referencing volumes of physical maps and historical texts, such as the Barrington Atlas of the Greek and Roman World—a cumbersome, 50-centimeter-tall reference book that requires a magnifying glass to read. In addition to physical references, archaeologists also accumulate information from search engines and other digital resources.

To create a picture of the past, archaeologists must find a way to combine and arrange these resources. But the complexity of sorting and layering data can cause significant delays in the interpretation and analysis processes. As a result, advances in archaeological knowledge are often dependent on the archaeologist's ability to organize and interrelate data.

NKUA professors had to find a new way to organize and apply vast amounts of disparate data while persuading archaeologists to take a fresh approach to research.

According to Plantzos, "One of the challenges of such a traditional discipline is to convince our peers, and also our students, that there are other ways of looking back at the same evidence—new ways of interpreting antiquity."

Prior to lockdowns caused by COVID-19, students participated in archaeological digs like this one at NKUA’s excavation site at Marathon in Greece.

NKUA Department of History and Archaeology built ArchaeoCosmos, a large digital repository of curated archaeological data for the Mediterranean area, using ArcGIS Enterprise and related Esri products. Students and researchers are adding the location of archaeological sites, geographical names, and other documents.

Customer
National and Kapodistrian University of Athens (NKUA), Department of History and Archaeology

Challenge
The Department of History and Archaeology at NKUA aimed to create the first large digital repository of curated archaeological data for the Mediterranean area to enable more robust and meaningful research.

In 2020, the COVID-19 pandemic proved that a new approach to research was more necessary than ever as lockdowns prevented excursions to excavation and archaeological sites. This was problematic for NKUA's archaeology students as their curriculum emphasizes hands-on learning and on-site instruction. All NKUA archaeology classes include field trips, highlighted by the opportunity to participate in various archaeological excavations at locations like Marathon in Greece. Without the ability to leave their homes, students—and archaeologists everywhere—needed a solution that would allow them to continue their research remotely.

Kopanias had some experience with geographic information system (GIS) technology and saw its potential to enhance the research of archaeologists worldwide. To start, he used data visualization tools in ArcGIS Pro to create a map of the Mediterranean area and the Near East from prehistory to the end of late antiquity (ca 600/700 AD) that contained over 2,000 data points. Armed with his digital map and a vision for an archaeological database, Kopanias connected with Esri Greece distributor Marathon Data Systems and began creating the ArchaeoCosmos portal.

With support from Marathon Data Systems, Kopanias and Plantzos used ArcGIS Enterprise as the foundation for ArchaeoCosmos. The interactive map portal they created has a PostgreSQL database that currently stores information for over 70,000 archaeological features including names of cities and geographic features like rivers, lakes, and mountains in various historic periods. Since ArcGIS is scalable and customizable, the professors were able to select mapping and visualization features that would be most useful for archaeological studies. They also harnessed the power of ArcGIS Online to make ArchaeoCosmos accessible from any remote device or desktop.

To further empower research, ArchaeoCosmos leverages ArcGIS Dashboards and ArcGIS Survey123. With Dashboards, professors can remotely monitor student research activity, and students can track and view the activity of their peers. Additionally, students and staff can use customizable forms in the Survey123 app to sync their research to ArchaeoCosmos from any location. 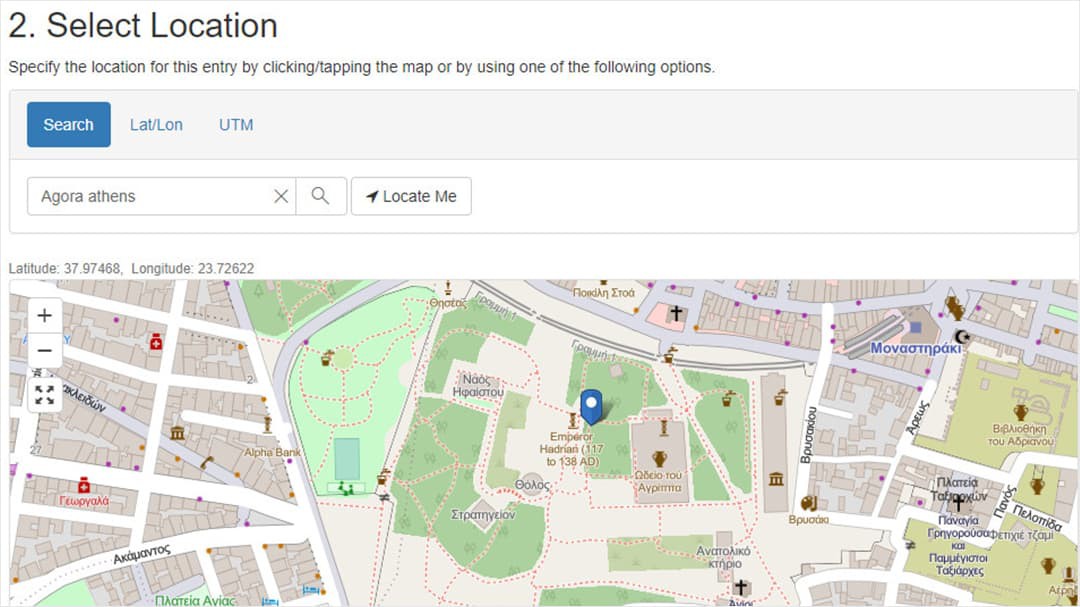 Students, staff, and researchers fill out forms in ArcGIS Survey123 to contribute ancient and archaeological data to ArchaeoCosmos.

According to Gregory Kontos of Marathon Data Systems, ArchaeoCosmos is the largest open-access archaeological geodatabase currently available. He notes that advances in GIS have made it more accessible and intuitive over the years, so the technology is easier to apply in unexpected fields or areas of study.

"Those who are not GIS experts . . . who are archaeologists, have managed to have the most advanced and the most sophisticated GIS portal in Greece," Kontos says.

ArchaeoCosmos is dedicated to the study of the ancient world, from the third millennium Before the Common Era (BCE) to the end of antiquity in the sixth or seventh centuries Common Era (CE). Instead of going through large volumes of maps and historical texts, archaeologists can now easily access a single database. Selecting a city on the map produces a dialog box with a wealth of information including toponyms, periods of inhabitation, and ancient roads. This data can be sorted and viewed as layers on the map, making it easy to filter and analyze.

This collection of digitally mapped historical and topographic information is publicly available on mobile devices and desktops. It can be used by anyone, from any location, to collect, analyze, and manage ancient data. Users can work on projects simultaneously and independently, without having to worry about interfering with the work of others.

Mobile access proved to be one of the most important features of ArchaeoCosmos. Many students were apprehensive about adopting new technology, but Kopanias and Plantzos were able to provide ArcGIS Online training programs to 150 students, allowing them to easily contribute to ArchaeoCosmos. "The best thing is that they notice that it's not too complicated and that they are going to be able to create maps for their research later on," says Kopanias.

The use of dashboards also created friendly competition within the cohort, as students were able to see progress toward collective goals. Together, they worked on collecting data for the 1,200 locations currently in ArchaeoCosmos—all from the safety of their own homes.

ArchaeoCosmos also helped Plantzos get university approval for NKUA's Cluster of Excellence in Digital Humanities program, which brings together the departments of History and Archaeology, Philology, and Informatics. Plantzos, who is currently the alternate president of the cluster, says it aims to promote the digital humanities through the study, research, and development of all aspects of Greek and Roman archaeology; historical geography of the Greek and Eastern Mediterranean; medieval and Byzantine studies; and modern Greek history, art, and culture.

Regarding the future of ArchaeoCosmos, Plantzos says, "Eventually, people will be able to re-create not just geography but also the whole world, like a capsule of the entire cosmos." 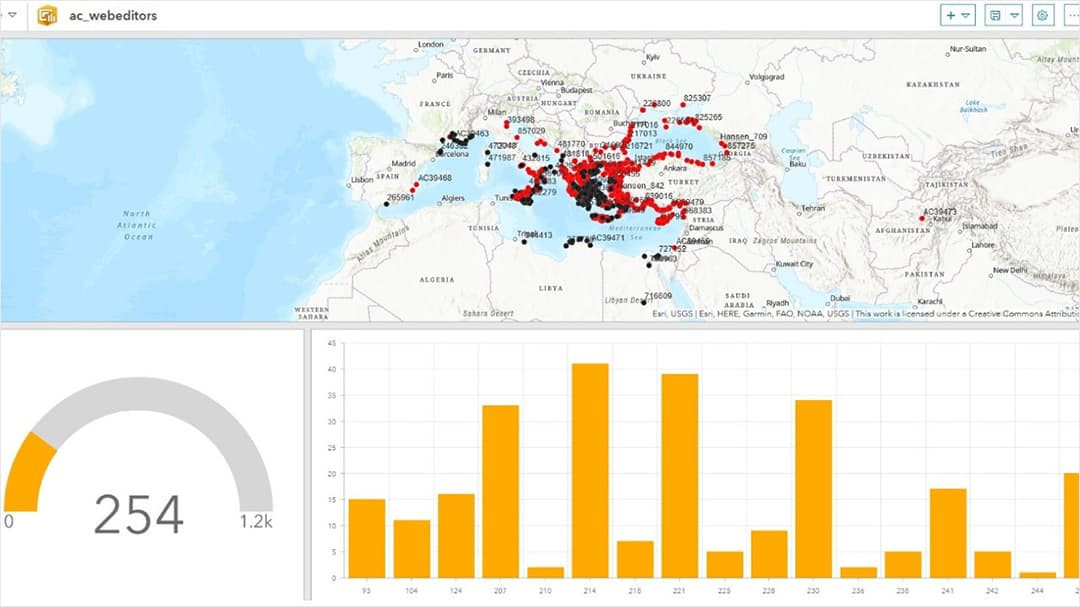 NKUA students and staff used this dashboard to track the progress of their research efforts.