As housing and rent prices rise across the US, families are finding it increasingly demanding to maintain a residence, and many localities are seeing an increase in homelessness. One in four Americans now spends more than half of their monthly income on rent, and an estimated total of more than 550,000 people are homeless nationwide. The US housing crisis presents many challenges for leaders who are wondering how cities can solve the problem. 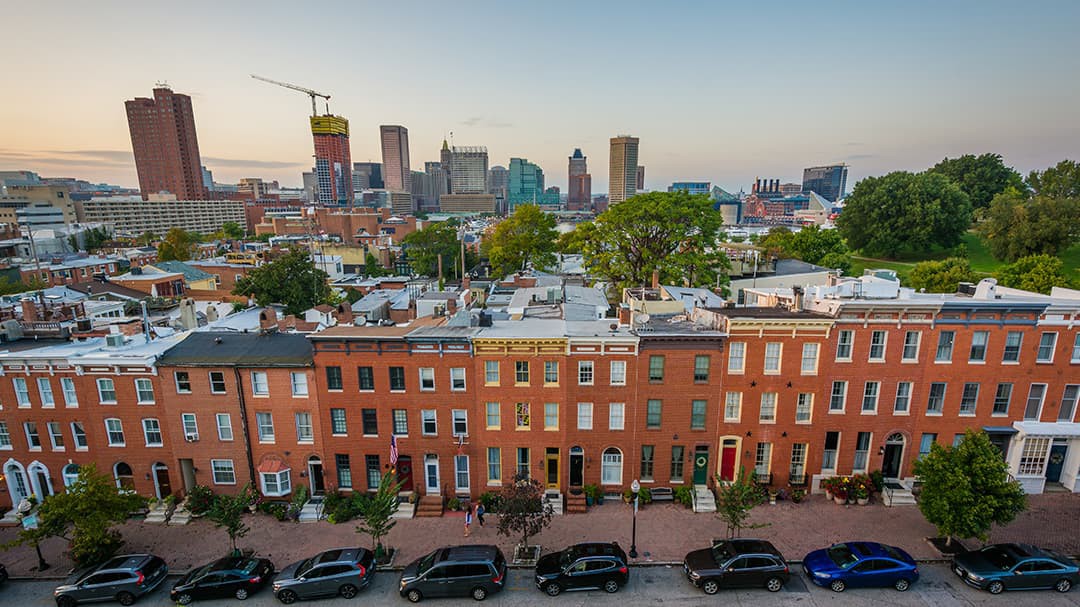 In Baltimore, Maryland, city officials have moved toward a placed-based intervention model to address many housing issues. The approach is reshaping transparency, accountability, and equity by surfacing data about each neighborhood and prioritizing actions for measurable outcomes. While overall community development goals speak to general needs, Baltimore's approach sees each neighborhood as unique, requiring custom, strategic intervention. For staff at the Baltimore Department of Housing and Community Development (DHCD), the type of investment varies across neighborhoods and over time.

Officials from the City of Baltimore relied on technology to support their place-based intervention strategy. Staff at DHCD built CoDeMap, a mapping application that is based on a geographic information system (GIS). CoDeMap visualizes and analyzes housing needs in the city, neighborhood by neighborhood. CoDeMap also is a central point of access for the department's numerous databases with everything from citation data to a property's permit history. Launched more than five years ago, CoDeMap has evolved from a housing code enforcement tool to a platform that provides insights into housing, community development, and property datasets at the citywide, neighborhood, block, and parcel levels. 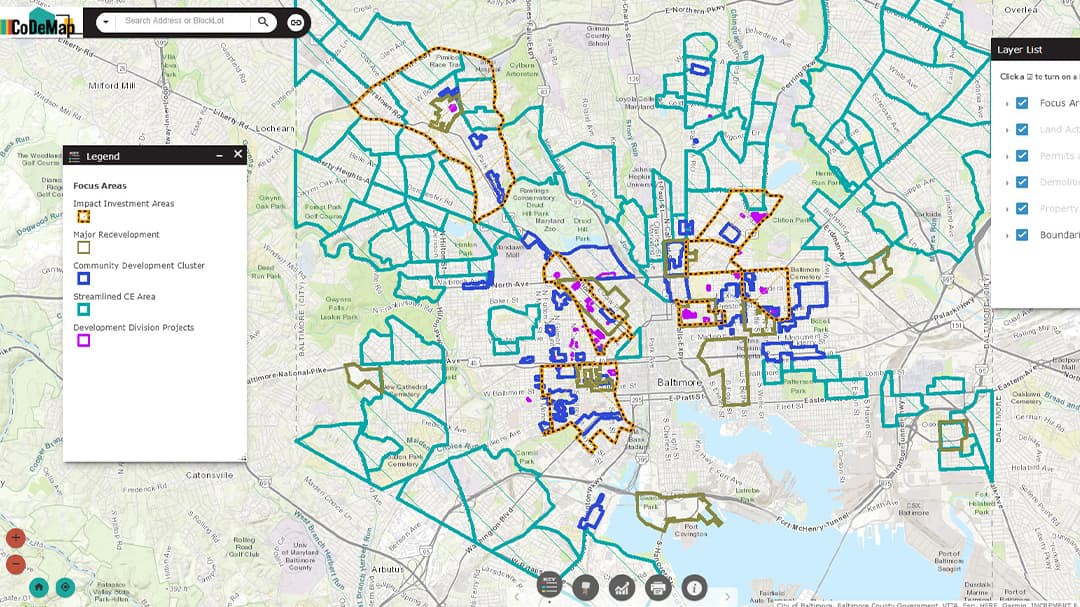 This empowers us on multiple levels, and we are able to not only see at a high level what our residents need, we can also focus on an at-risk neighborhood or a block, for example, and make more strategy decisions that positively impact our residents.

"What we've done is overlay demographic and socioeconomic data, as well as other key indicators, onto property and housing information," said Alice Kennedy, acting commissioner, DHCD. "This empowers us on multiple levels, and we are able to not only see at a high level what our residents need, we can also focus on an at-risk neighborhood or a block, for example, and make more strategy decisions that positively impact our residents." 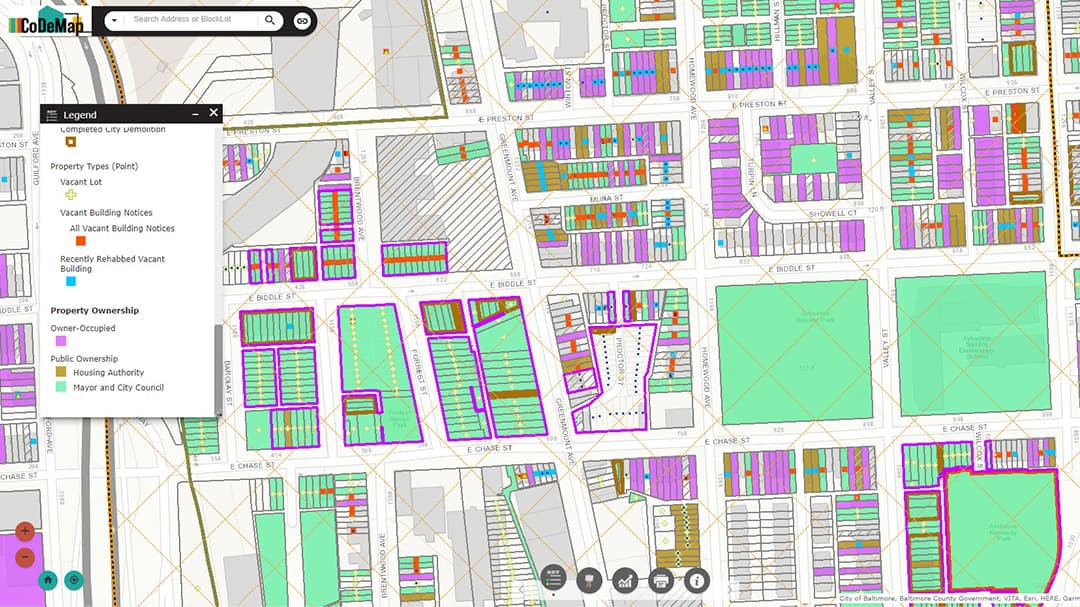 Recently, the DHCD team made major enhancements to CoDeMap and developed a new strategy for using the tool internally and externally. In a shift the city dubbed CoDeMap 2.0, the team made even more data accessible from a single source and enhanced the user interface with added widgets for drawing boundaries and homing in on certain areas of the city. Users can also now upload their own data to the app. Also, 15 previously proprietary DHCD administrative datasets are now public and available for download.

Upgrades also supported the idea that property information alone cannot reveal where the city should intervene. The DHCD team enhanced their analysis by incorporating American Community Survey (ACS) data and internal information to better understand the local demographics and community makeup. For example, users are able to view Baltimore's 270 neighborhoods and explore datasets for information on the number of permits pulled in the last five years, median house values, the population, the number of vacant building notices, and more. 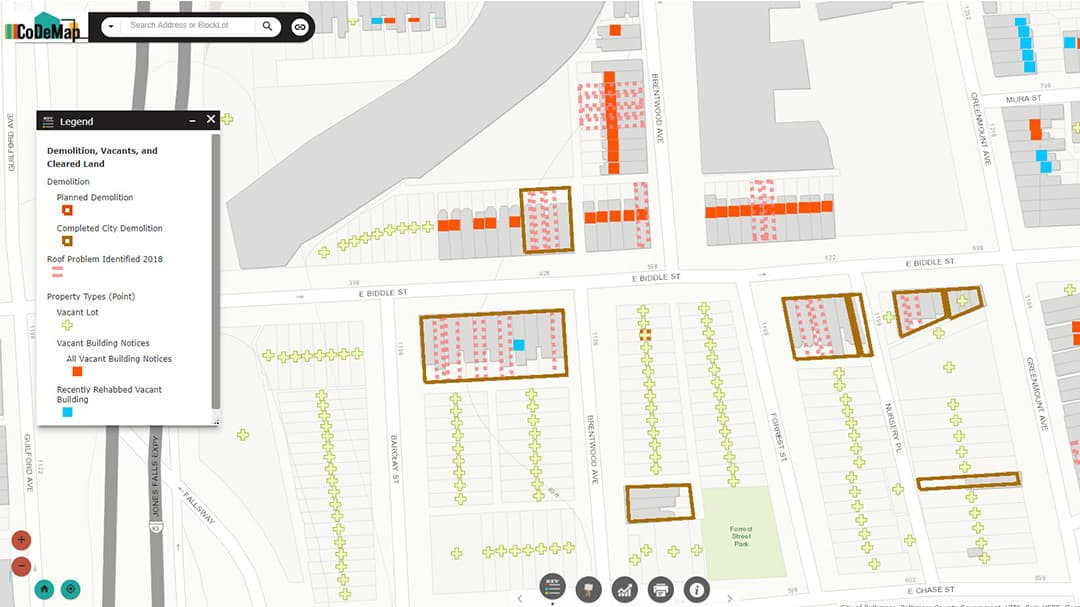 CoDeMap provides the city with a greater understanding of where vacant lots and proposed demolitions are located, and their impact on the citywide housing strategy.

"This is a really robust tool that has many different use cases. For instance, a decrease in vacant building notices can indicate to us that interventions are working, like in one of the agency's proof-of-concept areas, Greenmount West," says Kimberly Rubens, director of Research & Analytics, DHCD.

CoDeMap Is Taken to the Masses

With the early success in using CoDeMap internally and across other City of Baltimore departments, the DHCD team realized the potential for external groups including nonprofit organizations, neighborhood associations, and developers. The team created a strategy to share the tool and set up training sessions for the public.

"Since our public training sessions, we've seen external usage of CoDeMap dramatically increase," Rubens says. "I think part of this can be attributed to my team's excellent CoDeMap trainings. Nearly 500 city employees, community leaders, and members of the public attended a series of trainings we hosted." Those trainings were recorded and made publicly available.

Before CoDeMap made information available to the public, people would have to email a data analyst from the city to request different data layers. Now, with the self-service model, community groups can leverage data directly from CoDeMap, ensuring that they can quickly access and use the most up-to-date information.

The Focus Is on People, Not Just Property

"Each neighborhood in Baltimore has a story created by the people who live there," explained Kennedy. "GIS has given us the opportunity to bring all relevant data into the picture and to put a face to each neighborhood, moving from a view of structures to residents."

CoDeMap helps the DHCD team lead with a near real-time decision-making revolution. With placed-based interventions and the right GIS tools as a foundation for strategic planning, they have plans to continue to broaden datasets, insight, and analysis.

The efficiency and effectiveness of the city's approach give staff the opportunity to ask what else can be done to improve quality of life for residents. Staff can not only solve problems for the short term but also look at the bigger picture of equity, health, and climate change. Some of the city's upcoming work includes mapping cool roofs to better understand temperature impacts and identify urban heat islands. This effort to map and analyze environmental factors will help influence how to achieve lower energy costs and could mitigate asthma risk.

"We are thinking differently in terms of how we're approaching the needs of our residents," Kennedy said. "GIS helps us see where we should focus our efforts, how that will relate to other work happening on the block, what the developers are investing in, and what our communities are interested in."

We are thinking differently in terms of how we're approaching the needs of our residents. GIS helps us see where we should focus our efforts, how that will relate to other work happening on the block, what the developers are investing in, and what our communities are interested in.