With a population of 200,000, Akron, Ohio, is the state's fifth-largest city. With small-town charm, a surprising history including where the hamburger was possibly invented, and a legacy of music, this midwestern town has a lot to offer residents.

The City of Akron, which is governed by Mayor Daniel Horrigan and the Akron City Council, is a midlevel municipality that manages a range of city services, from parks and recreation to fire, water, and sanitation. The city employs about 2,100 full-time and seasonal employees across all divisions. Like other cities and towns, Akron was thrust into uncharted territory when COVID-19 began spreading across the United States.

Akron city officials had to make fast decisions to protect not only residents but also its employees, beginning with the initial stay-at-home orders issued in March 2020. The city needed accurate, real-time data to make important decisions on how to bring employees back to work and support active city employees.

The City of Akron enlisted the help of its four-member geographic information system (GIS) team to deploy a solution that would improve access to information for city officials and offer more timely data. The team implemented analysis software to explore and analyze data, which is helping officials make more data-driven decisions and increasing data transparency across the organization.

To support employees, city administrators needed better data. Following stay-at-home orders, city officials had to determine which employees were essential and nonessential. An estimated 30 percent of the workforce was deemed nonessential and temporarily furloughed, so data would help officials decide when to bring workers back.

Also, essential employees had certain restrictions, such as vacation and leave times, so data would also help the city manage benefits for these workers. The administration wanted a new tool to track what type of leaves were being taken to analyze its impact on staffing levels and overtime costs incurred by the city. City administrators would eventually need to report the figures to the federal government, so they wanted the ability to see the data in real time.

According to Darren Rozenek, IT applications manager for the City of Akron, access to real-time data for decision-making was difficult due to the city's current legacy applications. He explains, "All of these things are HR personnel decisions that with our current [systems] were near impossible to make in any kind of real time. We have a 20-year-old HR system that doesn't have any dashboarding or easy reporting."

The overall process of obtaining personnel data involved several steps and was time-consuming. Rozenek says requestors would ask the appropriate staff member or department to print out a report, if available, or they'd have to go directly into the database and have the data pulled into a CSV format to produce a report.

"We had no direct, simple access to that type of data. We needed to give the administration the flexibility to start making command decisions on our employees," says Rozenek. "There was also no prior way for us to really visualize the information and put it in a useful format for the administration."

The city needed accurate, real-time data to make important decisions on how to bring employees back to work and support active city employees

"We started deploying dashboards, which were working very well for how we needed them, but I really wanted to do more targeted data analysis on systems that weren't necessarily spatially aware," says Rozenek. "We needed something more comprehensive in its deployment method and took less hand-holding [ . . . ] to develop."

Traditionally, business intelligence (BI) software would be used for this type of analysis. However, the city already had Insights software, so staff were able to accomplish all the traditional BI activities with the licenses they already had, making it an easy choice for Rozenek.

"ArcGIS Insights really provided a platform that was in a set fashion, and [we had] a group of people that understood how to make it work and to answer the questions we were being asked. We had no other platform to allow us to do that," says Rozenek.

Implementation of Insights was simple and straightforward, according to Rozenek, and the most training the team had was the video tutorials on the Esri site. "That does kind of speak to its ease of deployment. It was easy and comprehensive enough to sit down and within an hour or so you could be fairly proficient," he says.

This same dashboard also includes easy-to-see financial data, including how much overtime costs the city has incurred during a period and what the overtime codes are. "Until you see the data, it's hard to understand it. It becomes very important to be able to see that and visualize it," says Rozenek. 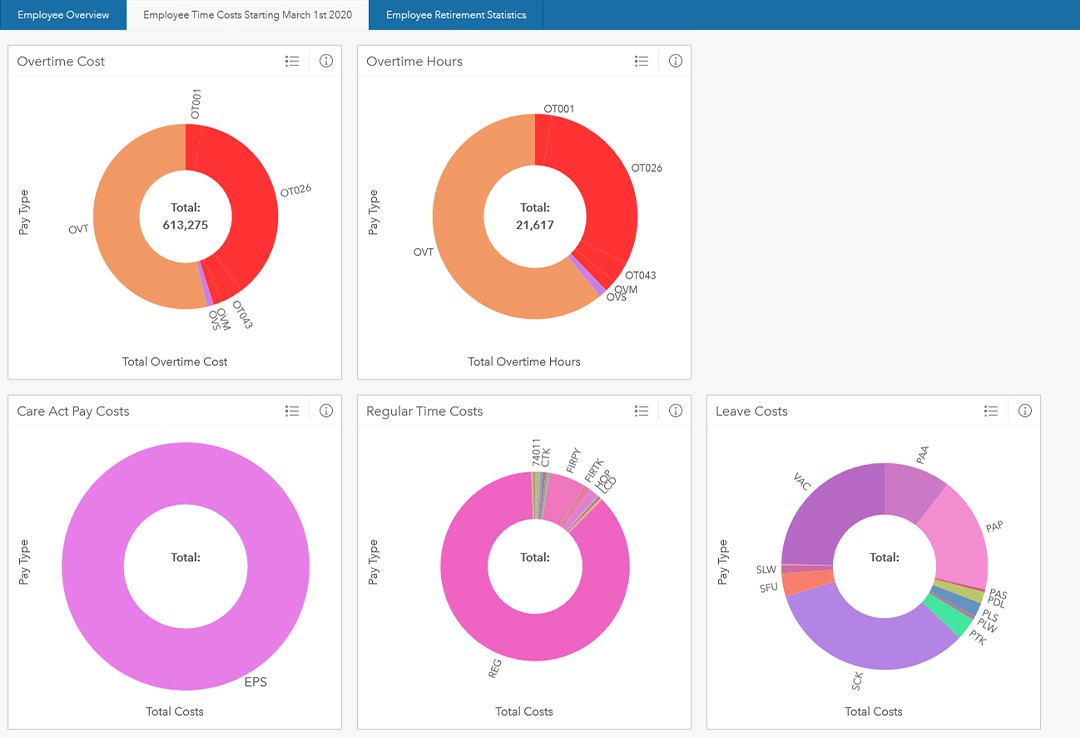 The use of Insights has enabled real-time access to personnel data and streamlined operations for city administrators. From the total count of employees to how many people are still nonessential in a department, city staff can access one platform, not separate systems, to retrieve data.

"When you're talking about data you supply [ . . . ] to our administration and our cabinet and our council members, the ease of access is as important as the information you're supplying," says Rozenek.

Training for the new tools was minimal because the administration was already used to logging in to the new platform and accessing the city's GIS, GIS applications, and the Enterprise portal, making it an easy transition. Rozenek says this has improved the speed that staff can consume information and get answers.

"From a cabinet level, [requestors] know exactly where they need to go. They're not calling our HR department or finance department anymore, which is now saving these two divisions time and effort," says Rozenek. "They're inherently just going to the tool we've given them to look at. And that's a new way of thinking."

Another significant benefit of Insights is the ability to visualize data. For example, in an Insights dashboard, the GIS team displayed the number of city employees eligible for retirement in a specific year. Rozenek says showing the numbers visually on a chart "had a different level of impact."

"We were having hard discussions about what we were going to do as a city with our workforce and the services we provide and how much overtime we can afford," says Rozenek. "So, visualizing things like that are invaluable for those discussions.[A visual] has a higher impact than [ . . . ] just talking or someone handing a CSV file or spreadsheet with rows of numbers."

Insights also allowed the GIS team to take nonspatial HR data and determine relationships and patterns. Rozenek explains that he can select a specific dataset, drag it in, indicate the chart type, and Insights presents interactive visualizations. This helps him do querying on the fly.

"As a GIS person, I can take our HR data, and I can locate any piece of it you want. I could tell you what building or floor has the most overtime in it," says Rozenek. "All I need to do is understand how that data works together, and Insights helps me do that."

The GIS team can now supply city administrators with a substantial amount of information faster. According to Rozenek, the amount of dashboard information the GIS team supplies is now seven or eight times more than it was when the first Insights dashboard was created. The number of requests the team has received for different types of information has led to an "increased thirst for knowledge," says Rozenek.

"Once cabinet members had access to Insights, they started to see how it could help their business processes in their divisions. It opened up a lot of these things that historically would have never even been discussed," says Rozenek. "We were able to give them their own ROI [ . . . ] just by showing them their data in a more specific and targeted way."

Insights has allowed the GIS team to provide dashboards, trending models, and Key Performance Indicators (KPIs) in a simple, accessible way, making it the right tool to move the city forward.

"Insights is just another arrow in the quiver of what I'd call enterprise GIS. Right now, it's one of the arrows we're going to the most because it's the one that targets our business case," says Rozenek. "It requires minimal [training], but its functionality is high because it allows nonspatial data connections. It's one more way to target those questions we're being asked." 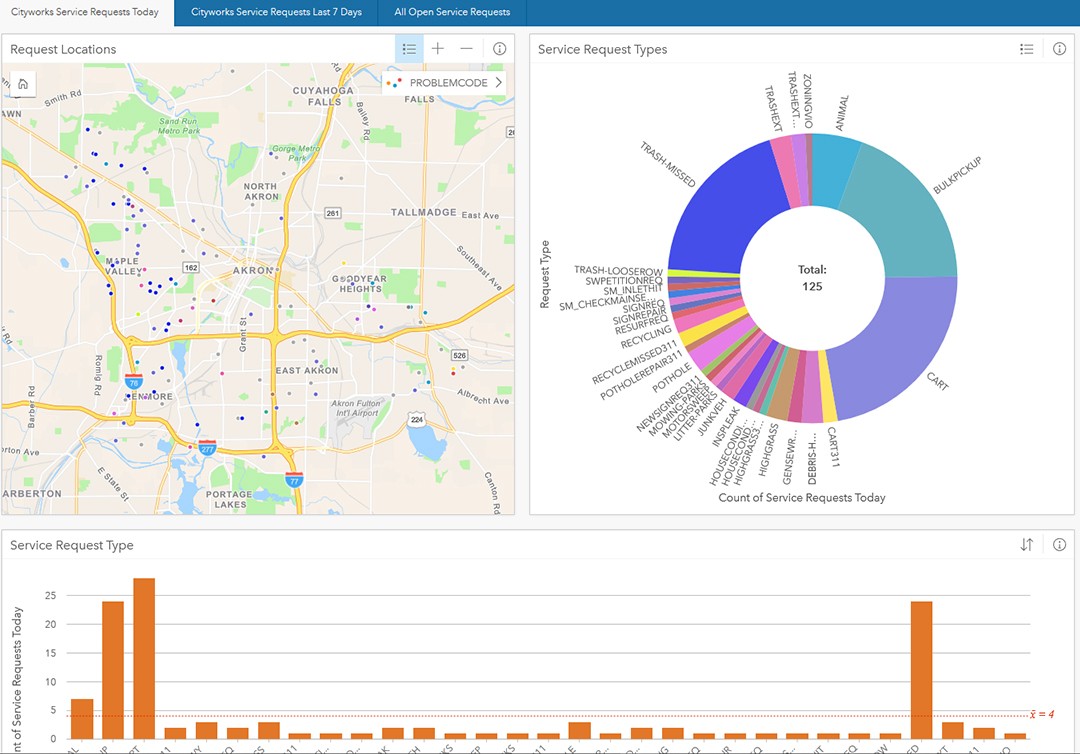 Cityworks Service Requests for a week

"Insights has given us the ability to transition to a more data-driven decision-making municipality."