Located more than 2,000 miles west of South America and in the middle of the Pacific Ocean is Rapa Nui, also known as Easter Island, the world's most remote inhabited island. The 15-mile island has captivated archaeologists and tourists alike for centuries as the home of the renowned Moai statues. In recent years, the island locals looked to both expand infrastructure and identify ancestral sites for preservation beyond the famous statues. However, there was a lack of mapping of the patrimonial sites and only rough ideas of their geographic boundaries.

In 2019, Dr. Edwin Barnhart, PhD, an archaeologist and director of the Maya Exploration Center, worked with a team of researchers and geospatial experts from Tukuh Technologies, LLC—a tribally owned 8(a) technology and geospatial services company—to identify and map out ancestral sites of the Rapa Nui people over an eight square mile radius.

Traditional archaeological projects can take months or even years to complete with day-to-day groundwork. However, Barnhart's team had a timeline of nine days to capture as much data as possible for analysis while also operating in the globe's most remote location. To make the most of this trip, the team would need a technology solution that could quickly cover an eight-mile section, efficiently capture data offline, and be accessed for collaborative use.

Challenge
Researchers working on the remote island of Rapa Nui needed a digital solution that could work offline and collaboratively build a comprehensive map of ancestral sites in a joint preservation effort with the locals.

Solution
ArcGIS Online provided a management system for high-resolution aerial imagery and the ability for an archaeologist and his research volunteers to crowdsource hundreds of hours of data, which would then be used to create a layered map of the ancestral sites on Rapa Nui.

Result
The research team was able to identify Rapa Nui ancestral sites and will present a layered map of the sites and the associated data to the Rapa Nui people.

"You could bring an army of people, but they could only be there for a certain number of days before they had to leave Rapa Nui," says Patrick Crawford, Project Manager for Reality Capture Services at Tukuh Technologies. "So really leveraging technology as a force multiplier was our initial goal to help with this project."

After reviewing many options, Barnhart's research team and geoexperts landed on one technological approach to their challenge involving the use of aerial imagery and geographic information system (GIS) technology. It involved taking advantage of the nearly treeless island by flying senseFly eBee fixed-wing drones across the sectioned land. In a period of nine days, the drone team captured aerial imagery spanning eight square miles of the island at a pixel resolution of 4.4 cm.

"I've been mapping archaeological sites for my whole career, some [sites] like Palenque took me three years to do, and I was amazed at what we were able to do on Rapa Nui," says Barnhart. "We covered more than what I covered in three years at Palenque in three days on Rapa Nui with the combination of drone mapping and ArcGIS. It went right into the software, and the abilities to overlay things, to turn on and off the aerial, and to see the topography was like magic."

Being new to GIS, Barnhart used a simple technological approach to analyze the data: crowdsourcing. The approach involved leveraging ArcGIS Online where the data was stored and accessible to 14 volunteers from the original research team. These volunteers were assigned a section of land to analyze the imagery, topography, and other captured features. Each volunteer helped to identify features on the map that appeared to be either modern, such as a trailer, or older, such as an ancestral site. The identified features were digitized and recorded in hosted feature layers and would help build a layered map for the Rapa Nui people.

"Each one of the volunteers would have their grid to look through and place little marks on features they felt might be something, and the identified marks gave me a head start to find the features that I would separately map in," says Barnhart. "This preliminary analysis normally [takes] hundreds of hours [to complete], but crowdsourcing helped spread the work out, and it made the whole thing run quicker, and it took a huge burden off me."

The use of ArcGIS provided Barnhart with high-definition imagery for analysis and remote sensing data feeds included in the best-in-class location-based intelligence software. Additionally, in using ArcGIS, Barnhart had a system for data management and collaborative abilities for the volunteers to crowdsource the research. The Rapa Nui People also use ArcGIS technology, which enables Barnhart to share the raw data and maps he develops in the system with them. 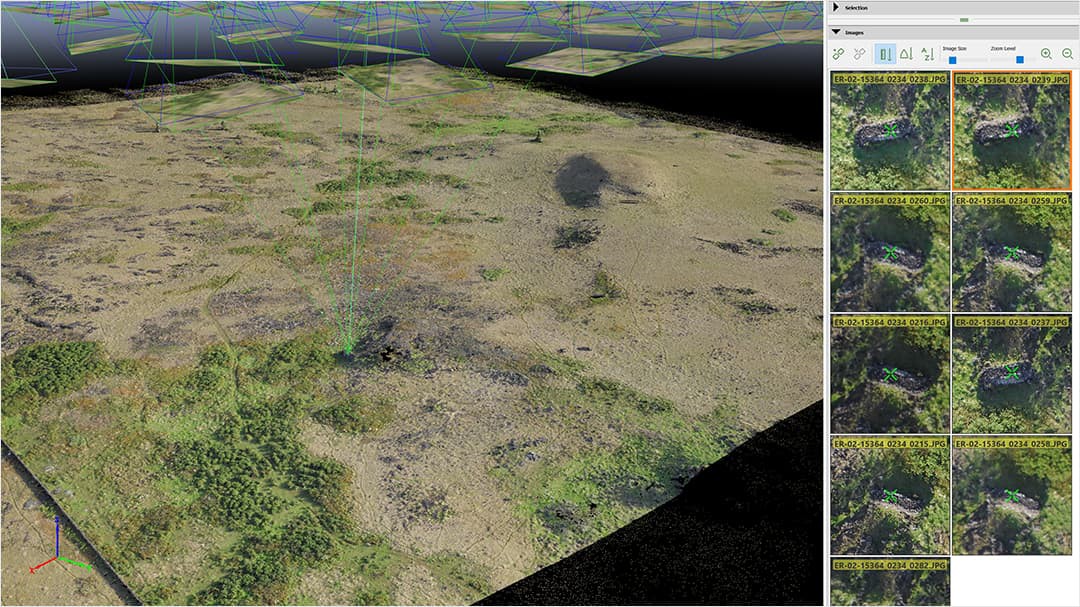 Within about a year and with the combination of drone mapping, crowdsourcing, and ArcGIS technology, Barnhart created a comprehensive map of identified patrimonial and ancestral sites for the Rapa Nui people. This map includes imagery of the identified sites, terrestrial survey data, and features of the island to help the Rapa Nui people preserve their past.

"In the end, we accomplished everything that our clients and stakeholders were desiring; we did it the way we wanted to do it, the way that would be the most effective and would give the best result," says Crawford. "And I hope we can go back and do more of this work."

For Barnhart, the ability to layer the map, add or remove features, and tailor it to different audiences was essential for this research. It also provided the space for the archaeological process to naturally take its course.

"When you start the archaeological process, you don't know what you're looking at. You might misidentify things, or there may be aspects of something that you have already mapped that you didn't realize were important until it dawns on you later," says Barnhart. "But, with this kind of map, we can go back in and tweak, we can change as we go—the map grows with us as we learn, and it is our primary tool for learning."

Looking to the future, Barnhart says there is a clear path for GIS to continue to make an impact in the archaeological field.

"People say that a picture is worth a thousand words. Well, in my opinion, good [maps are] worth 10,000 words—100,000 words—they speak for themselves," continues Barnhart. "Our ultimate goal of sharing archaeological information is so much better with this technology."