Maintaining this highly active transit system is not easy. MTS regularly conducts service planning, scheduling, and performance monitoring, with adjustments occurring three times per year or as needed to improve efficiency. Part of these improvements included creating a digital inventory of all assets and rail maps. This inventory was created using geographic information system (GIS) solutions that can be updated regularly, serve as an operational management system, and be referenced for future projects.

In 2013, MTS began using GIS, and staff quickly realized the long-term benefits the technology could deliver for assets and data management, route monitoring, and expansion planning. To take full advantage of GIS, MTS IT Enterprise architect Jason McNeil recognized the need to build an inventory that included all assets and maps of current routes that could be easily updated.

Challenge
For the San Diego Metropolitan Transit System (MTS) to maintain assets and plan infrastructure development, the organization needed a digital location-enabled inventory of its system.

Result
With the successful implementation of a digital inventory, MTS leveraged the power of GIS through spatial analysis of work activities, mobile field operations, and operational insights to maintain assets, make better-informed business decisions and plan for expansions such as the Mid-Coast Corridor Transit project.

Building an inventory would prove to be challenging. Traditional mobile and digital units could not be used under the safety regulations of the California Public Transportation Department. McNeil and the MTS team would need to find an innovative solution to capture the data and transmit it using a GIS platform without interrupting services or affecting travel time.

MTS partnered with Mandli Communications, an industry leader specializing in digital imaging, data collection equipment, and operational methodologies for various US departments of transportation. MTS and Mandli staff decided the best course of action involved the use of light detection and ranging (LIDAR) technology to capture assets and map out the 54-mile trolley system. LIDAR is an active remote sensing technique that uses a pulsed laser to measure distances to produce precise 3D information about the earth's surface and an object.

To capture the LIDAR imagery and 3D imaging, Mandli staff deployed their Maverick—a portable, vehicle-mounted spatial data collection system. Given the unique circumstances, Mandli staff developed a suction cup mount for the Maverick and attached it to the sides of the Trolley. This approach resolved safety concerns and avoided service interruptions.

"This solution allowed us to capture data whenever we wanted to," says McNeil. "For example, we would put an 'out of service' sign on a Trolley, run it down the line, and then have the operator at the end of the line switch the camera to another Trolley going in the opposite direction."

Learning from this solution, MTS and Mandli Communications partnered again to recapture data in 2016. While they deployed the same Maverick technology, to save time, they used two systems (a LIDAR and a camera unit) on both ends of the Trolley vehicle to collect data in both directions at the same time. In total, both the 2013 and 2016 LIDAR runs captured the entire system (54 linear miles of tracks). This included numerous assets ranging from crossing gates (87) to substations (63) to thousands of fasteners and nearly 300,000 crossties.

MTS had an enormous amount of data to categorize and maintain. MTS leveraged ArcGIS Online and Portal for ArcGIS to store and manage the data. 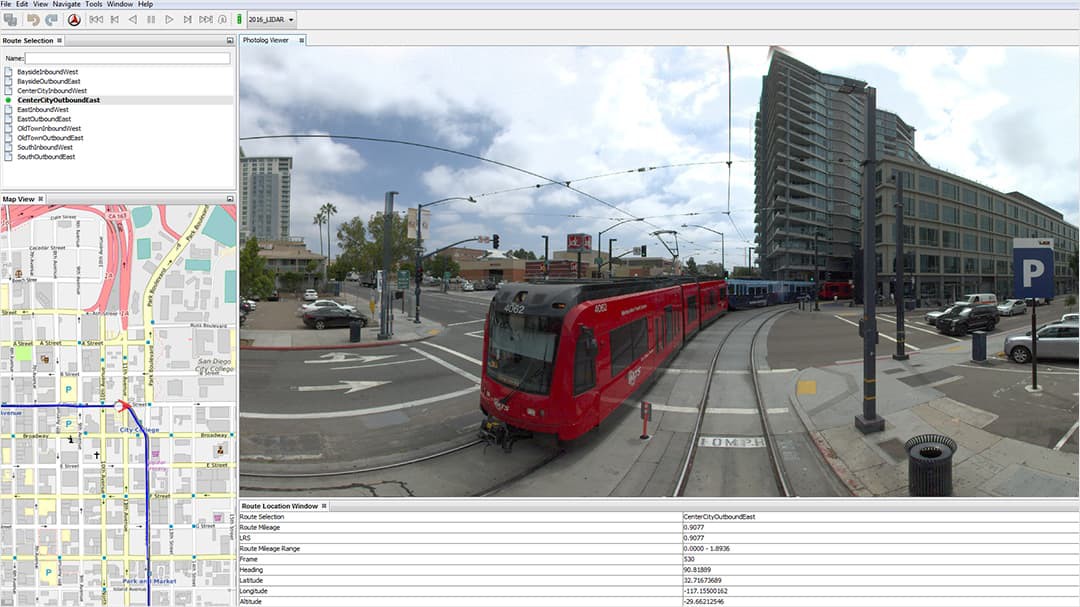 An example of the RoadView application MTS staff use to find assets, featured here is a Trolley map location and image.

By integrating ArcGIS Online with a program that enables users to create rich maps and analyze business data visually, MTS created its digital inventory gaining a full picture of its railways and business outcomes. This powerful system provides decision-makers with insights into the conditions of assets, historical records, data on associated costs, and more. It is supporting efforts to establish and streamline workflows including the permitting process and scheduling of preventative maintenance.

The new GIS and LIDAR approach had an unexpected positive outcome for the training department. Using the information collected and the Mandli Communications Roadview application, new train operators can train in a classroom as opposed to the traditional ride-along sessions.

"This solution enabled us to take all of our information into a spatial format and has given us a lot of unexpected uses," says McNeil. "We are really excited about the inventory and to continue getting more benefits out of it."

Empowered by GIS and LIDAR technology, MTS will periodically recapture data for the Trolley system to maintain an updated inventory. The next data capture is scheduled for 2021. Moreover, the inventory has been vital for infrastructure planning including the Mid-Coast Trolley project. This 11-mile trolley extension of the agency's UC San Diego Blue Line will allow riders from the border of Mexico at San Ysidro to travel as far north as University City.

San Diego county expects a population growth of 19 percent by 2030 and employment opportunities to grow by 12 percent. The infrastructure expansion and development of the digital inventory are ways MTS will continue to improve service for a growing ridership base.