The restaurant industry is suffering significant losses due to the coronavirus disease 2019 (COVID-19) pandemic, with more than 8 million employees out of work and $120 billion in sales shortfalls, according to the National Restaurant Association. Minority-owned businesses have experienced disproportionate impacts.

"We were making this map at the same time as our community was having a lot of conversations and protests and dialogue about what we can do to better support Black-owned businesses and minority-owned businesses in our community," said Rebecca Woodbury, director, Digital Service and Open Government department, City of San Rafael.

Since the launch of the Open Restaurants Map in June, more than 140 small and minority-owned businesses across Marin County have been added—as far south as Sausalito and as far north as Novato. In the first two months of going live, the map accumulated over 8,200 views.

"During the COVID-19 pandemic, helping small businesses stay connected to their community has never been more important," said Danielle O'Leary, director, Economic Development and Innovation, City of San Rafael. "Offering this map to businesses who are struggling has been one of several other support efforts that have helped show our businesses that we care and we're here to help."

A team from the City of San Rafael's Digital Service and Open Government department made the mapping application in collaboration with the city's chamber of commerce and the County of Marin's economic development department.

"Restaurants are the flavor of our city … I think when you live in Marin County and you think of San Rafael, you actually think of all those restaurants," Woodbury said. "When we think about the livelihood of our downtown, it's the restaurants. And so, it was this really important part of our economy that was really, really scared and hurting. We wanted to raise awareness."

The City of San Rafael's commitment to supporting racial justice influenced the inclusion of the minority-owned component of the Open Restaurants Map providing an easy way for residents to locate and support self-identified, minority-owned restaurants. Woodbury says the map is one way the city is trying to lift up minority-owned businesses and help people who want to give support.

Crowdsourcing Data for the Map

With a tight deployment timeline for the Open Restaurants Map, the city's digital team employed a crowdsourcing strategy to collect the data it needed.

"This was a good-sized project for us, and we felt like it would add value [to the small business community]. And I think in this really, really difficult time, we were just looking at how we can help," said Woodbury.

The city also launched a public information campaign to grow awareness of the new map and encourage local restaurant owners to add their business information. Using the ArcGIS Survey123 app, business owners can add their restaurant to the map, update their listing, and designate whether they are minority owned. 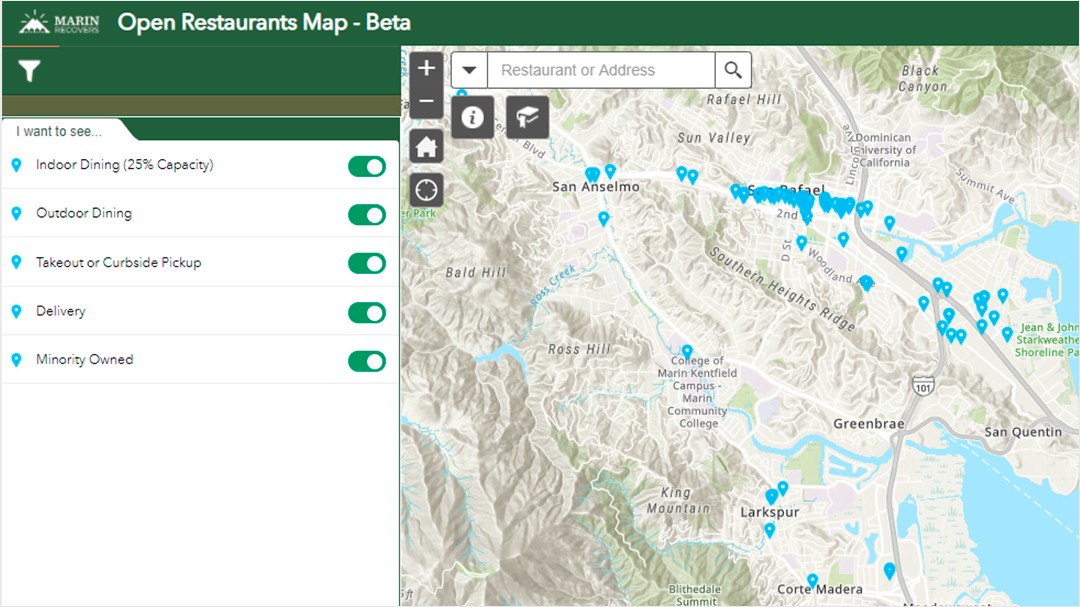 This map shows open restaurants as the City of San Rafael and Marin County economy reopens during the COVID-19 pandemic.

After its launch, the restaurant map garnered positive feedback from the chamber of commerce, the downtown business improvement district, and the county's economic development department.

With that sign-off, Baron expanded the radius of the map to include open restaurants throughout Marin County. The map was then incorporated into the Marin Recovers COVID-19 initiative and website dedicated to the county's phased reopening plan.

"We wanted that home [for the map]. We had it on our city website, but we really wanted it to be on [the official Marin County COVID-19 website] and to have that countywide branding, so all of the other cities and towns felt like it was theirs, too," said Baron.

Creating a tool to support minority-owned restaurants that could be used by residents in other cities throughout the county was an exciting achievement for San Rafael's digital team.

"I think that Marin is this really interesting place … and I want to see more sharing. And so, I just think, what more can we do that benefits others?" Woodbury said. "I think there's so much more … there's a really interesting shared service space for technology and digital work." 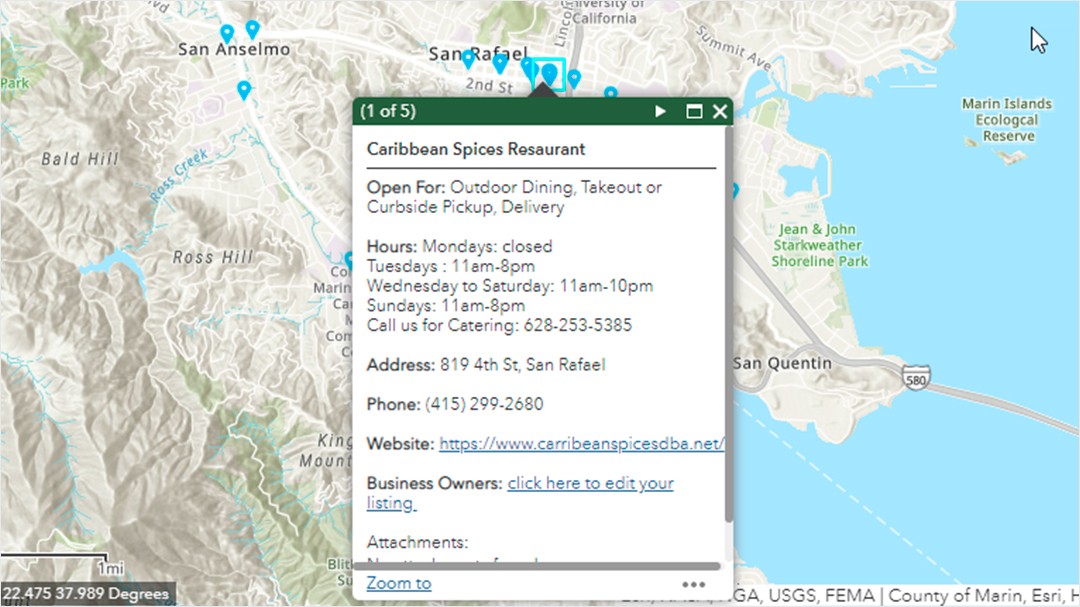 This map shows an interactive pop up of a minority-owned restaurant's business information for the public to access.