Lynnwood, Washington, is the fourth largest city in Snohomish County. Located 16 miles (26 kilometers) north of Seattle, Lynnwood can be characterized as a suburban bedroom community that is home to a large mix of retail businesses. Like similar suburban communities, Lynnwood is auto oriented, with significant concentrations of big-box stores and strip commercial retail centers. In 2007, the City of Lynnwood adopted the City Center Sub-Area Plan to provide a guiding vision for a key area of the city. The plan's goal was to transform the area into a vibrant, compact, and lively city center that provides an appealing place to live, work, and play.

As a part of the subarea planning process, a planned action environmental impact statement (EIS) was prepared. The EIS documents major environmental impacts of a proposal and describes measures that can be taken to mitigate those impacts. As the planned action EIS is comprehensive, individual analyses of subsequent development projects would no longer be needed following the adoption of the mitigation program. The subarea planning effort and EIS were adopted as an ordinance to help streamline the permitting process, which codified the initial environmental impact study and established maximum build-out density.

A wide range of projects have been completed recently or are under way, including the Lynnwood Link Extension, which will provide fast, frequent, and reliable light-rail transit service between south Snohomish County and the University of Washington, downtown Seattle, Eastside, Seattle-Tacoma International Airport, and other places. Plans for improved rapid transit between Seattle and Everett have catalyzed unexpected demand for dense development in the City Center area—so much so that Lynnwood was pushed to reevaluate the build-out density allotted by the planned action ordinance. To assess the impact of new development on the site, 3D geographic information system (GIS) technology was leveraged to explore potential massing and visual impact scenarios, and calculate potential housing units, jobs, and square footage of office and retail space.

The original planned action ordinance for the City Center was approved by the state following the Washington State Growth Management Act (GMA) and the State Environmental Policy Act (SEPA), which set geospatial limits on the density and location of development. These limits were based on factors like expected population and environmental impact. The original purpose of the ordinance was to allow for quick permit review and SEPA compliance by proactively completing the EIS process. Using the 2007 subarea plan as its rationale, the ordinance has a maximum build-out density in the City Center of 9.1 million square feet throughout the 250-acre area.

In December 2019, Lynnwood's city council approved Northline Village, a high-density mixed-use residential complex, in anticipation of increased housing demand spurred by the announcement of the new Lynnwood Link rail station. The approved development utilized 18 acres—just over 7 percent of the total developable planned action area—but accounted for one-third of the 9.1 million square feet of development allowed by the planned action ordinance for the entire area. This left the remaining 93 percent of the site with very little density to develop. With the addition of the Lynwood Link and the anticipated increase in residents, the city triggered a reevaluation of the planned action ordinance under the SEPA and the GMA.

Reevaluation of the Planned Action Ordinance

To assess the impact of the new Northline Village development on the remaining, undeveloped portions of the City Center, Lynnwood sought the expertise of Esri partner Houseal Lavigne Associates a firm with digital twin and smart city experience. Houseal Lavigne's approach would leverage the city's existing GIS information and data to analyze and model—in 3D—two different scenarios:

·       A compliant scenario, showing a build-out following the ordinance, outfitting the remainder of the 9.1 million square feet across the site

·       A realistic scenario, showing the potential of the City Center if future development occurred with density similar to that of Northline Village

This is where GIS would prove to be an indispensable tool, qualifying and quantifying the impact of each scenario.

The compliant model fit out the remainder of the planned action area site to meet the development build-out maximum at 9.1 million square feet. This model featured viable building footprints and incorporated parking, based on city minimum requirements, through ArcGIS CityEngine rule-based design. The dynamic program allowed the Houseal Lavigne team to customize the CityEngine dashboards to key performance numbers to build efficiency in the model. Since the dashboards were synced with the 3D model, they automatically updated as changes were made to its attributes, making the design and analysis of the project highly dynamic and efficient. As illustrated in the accompanying image, the compliant site model meets the 9.1 million square feet development maximum but is dwarfed by Northline Village. 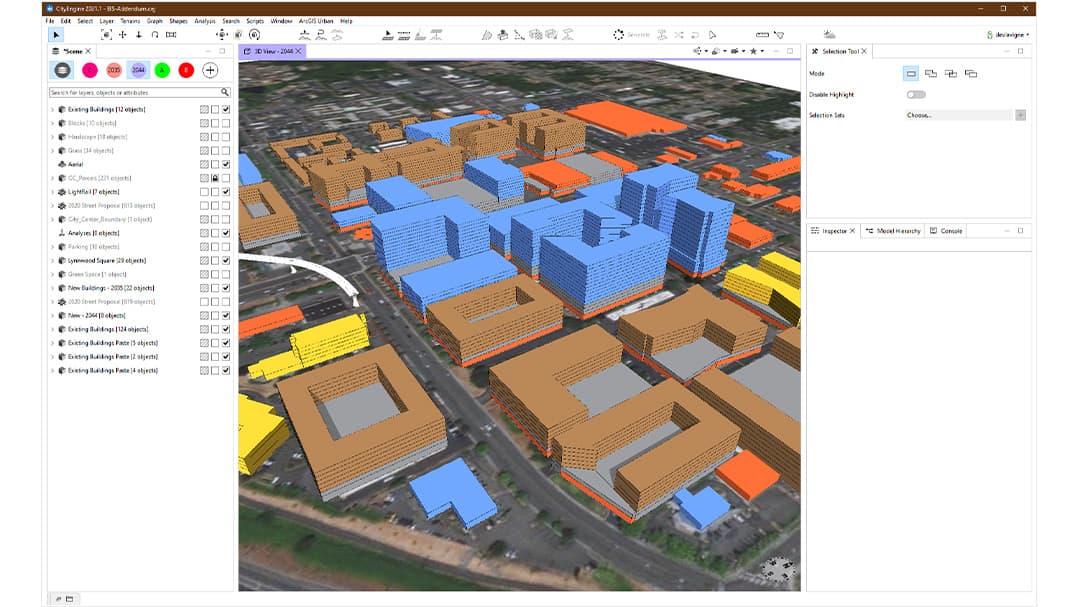 The realistic model applied a market-driven approach to the remainder of the planned action area. This scenario incorporated the proposed Northline Village project as well as three other recently approved mid-rise residential developments within the site, which were used as references for current market demands for density. Utilizing rules in ArcGIS CityEngine to develop building massing based on retail and residential floor area standards, the team at Houseal Lavigne was able to ensure that the model represented viable buildings and followed the maximum heights set by the ordinance. This model, as illustrated in the accompanying image, fit out the site beyond the 9.1 million square feet compliancy maximum to roughly 15 million square feet of viable mixed-use development. 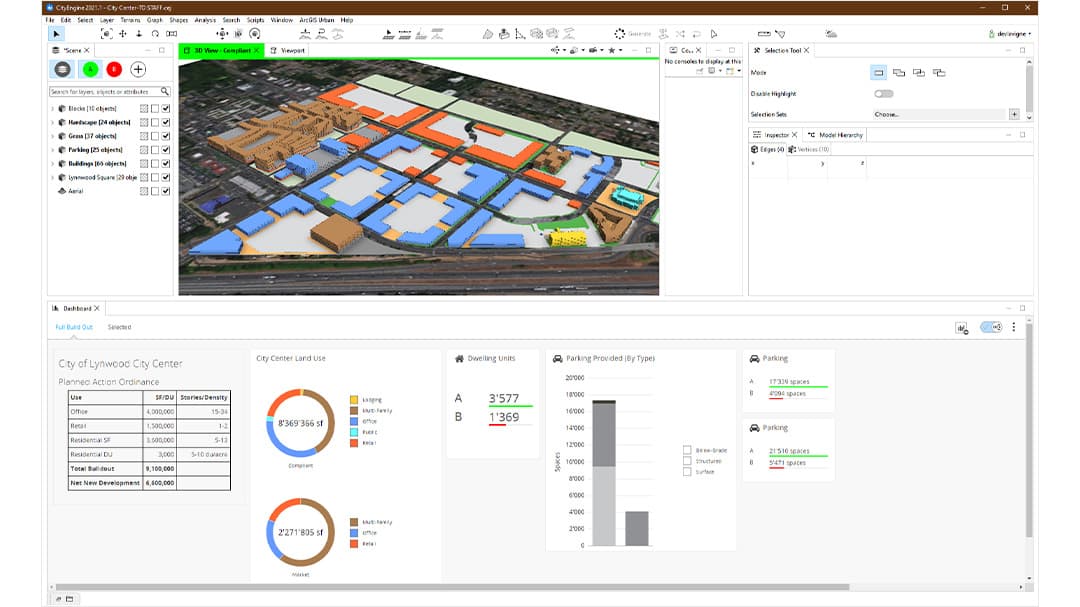 The two models, both created in ArcGIS CityEngine, and the dashboards made it possible for Houseal Lavigne to show the City of Lynnwood how the current building development maximum would curb redevelopment of the City Center area. Also, the city provided training so that Houseal Lavigne staff could work with elected and appointed officials to explore additional scenarios and outcomes. Lynnwood has used these models and the accompanying dashboard data to amend the City Center planned action ordinance. The amendment permitted a higher maximum build-out of the site area to reflect market-driven development and allowed the city to request additional development capacity from the state. 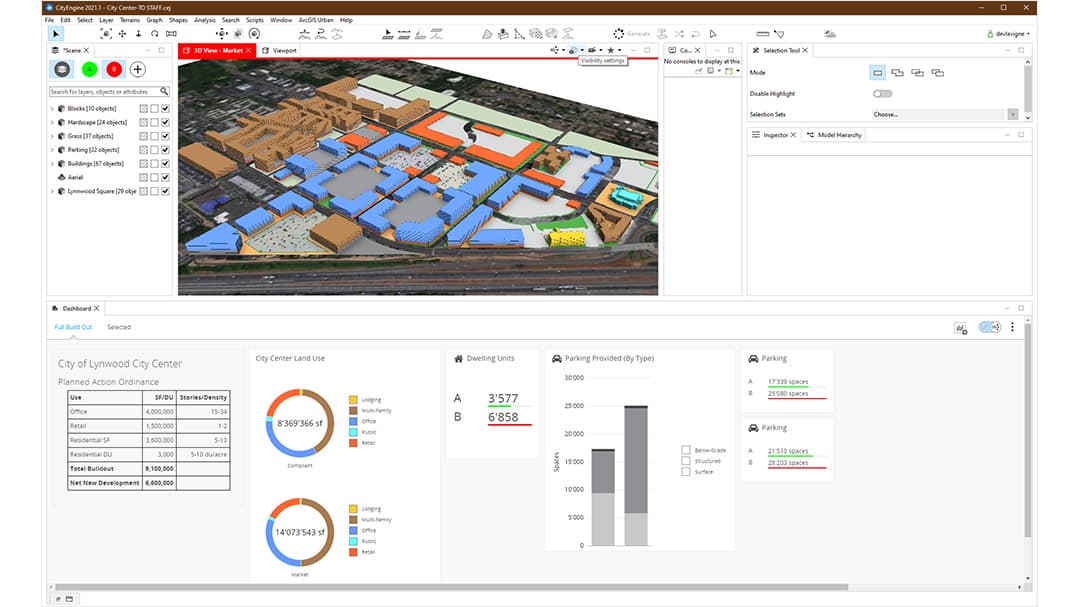