The Town of Morrisville is a fast-growing Raleigh suburb situated in North Carolina's burgeoning Research Triangle. Despite a strong desire to create a community focal point, local officials have hesitated to approve any development within the designated area for fear of proceeding down the wrong path. Ultimately, they were torn between the vague vision for low-density development established in the 2007 Town Center plan, and input received from residents and the development community for a more compact and dense mixed-use area.

Unable to reach agreement on appropriate structure heights and density, Morrisville's Town Center has remained largely undeveloped while other areas of the community are thriving. Recognizing the importance of this key area of the town, Houseal Lavigne, an urban-planning consulting firm, was hired to create a digital twin of the area to help the community reach a consensus and overcome the stalemate. The digital twin, or smart 3D model, of the Town Center enabled the community to visualize both scenarios and make an informed decision using qualitative and quantitative information.

With extensive input from the community, land-use and development sketch concepts were prepared. This resulted in two development scenarios:

Scenario A—A lower-density option considered by some to be more consistent with a small town, characterized by one- and two-story buildings with surface parking lots

Scenario B—A higher-density option considered by some to be more desirable and market viable, with four- and five-story buildings serviced by centralized parking garages 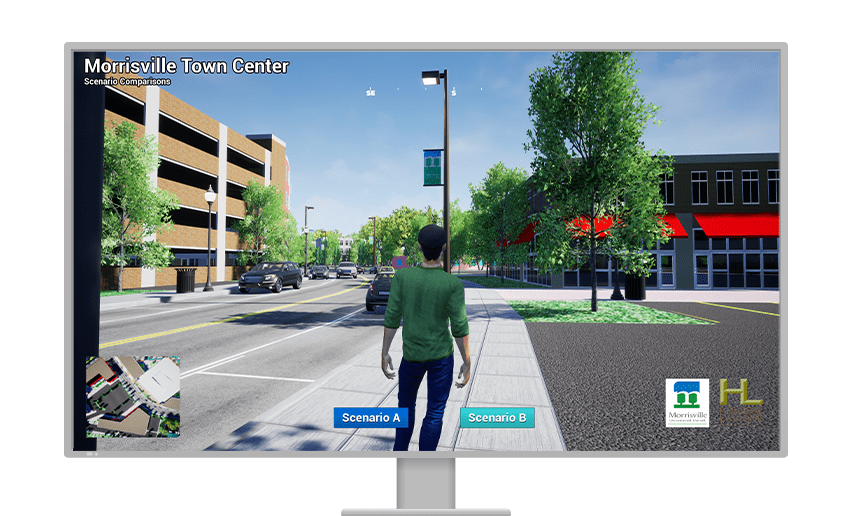 Creating a Digital Twin with GIS

Construction of the Digital Twin

The development of the digital twin for Morrisville's Town Center was a five-step process:

To accurately evaluate development options, the process was initiated by creating a digital twin of the study area to serve as a baseline, allowing comparison between all the scenarios. This included modeling the existing street network, land uses, buildings, and natural features.

Next, conceptual sketch plans were prepared for each scenario. Using a new street network as a backbone, building locations and parking lot configurations for each block were established. This step also identified the existing buildings that would remain. The two sketch plans were then modeled in 3D in ArcGIS CityEngine, where key performance indicators and metrics provided quantitative information about each development.

Within CityEngine, as building footprints were extruded and modified, dashboards provided real-time feedback, ensuring that each scenario followed the town's recently adopted zoning code. This included live reporting of land uses by square foot, the FAR of each site, the number of dwelling units, and the amount of parking required for development. Similar dashboards provided information related to parking supply, development cost, and potential population. A CityEngine web scene was publicly shared, providing town officials and residents an opportunity to view each scenario. Each building and site in the viewer was enriched with data, allowing a user to compare and contrast each scenario with the others.

While the results of the process so far had provided the data the town's officials needed, the process still did not address the concerns that taller buildings would be too dense and create too urban an atmosphere. To help elected officials better assess the scenarios, CityEngine models were imported into Epic's Unreal Engine, an engine that powers Fortnite and other popular video games. Additional details—including streetscapes, plazas, and open spaces—were added to the game engine, along with a playable character. Users could control the character to act as a pedestrian in order to take a virtual walk around Morrisville's envisioned Town Center. Buttons on the screen allowed the user to toggle between the scenarios, and live dashboards provided information about the development.

Hailed by the community as an absolute success, town officials unanimously chose scenario B. Houseal Lavigne was then directed to update the community's Town Center plan, policies, and recommendations to help Morrisville achieve its vision of a dense, compact, walkable, and vibrant community focal point.