As 33 elite athletes geared up for the 2021 Red Bull X-Alps, the world's toughest adventure race, the team at zooom productions prepared their 3D Live Tracking app so tens of millions of fans could follow the event. Over nearly two weeks, the race would move through five countries and cover almost 770 miles through the Alps. With no way to get camera crews and media to the challenging terrain, fans around the globe—as well as the athletes and race sponsors—would be depending on zooom's 3D Live Tracking app as the sole means of real-time race coverage.

The cofounders of zooom productions, a marketing agency specializing in sports and lifestyle brands, are also active planners of the race—and they knew the stakes this year were especially high. Athletes had fought to maintain their training and mental fortitude during a global pandemic, and more people than ever were ready to enjoy an inspirational experience they could view from the comfort and safety of their homes.

To support its immersive 3D Live Tracking app, the zooom team needed the right location technology, so they contacted Esri, the worldwide leader in geographic information system (GIS) technology. "I knew Esri technology from the past," says Hannes Maier, head of digital at zooom. "I reached out to Esri because I knew that it would work."

Developers at zooom used location services, imagery, and maps from ArcGIS Platform, Esri's platform as a service (PaaS) offering. The result was an unforgettable, seamless 3D view from the starting line in Salzburg to the tallest mountain in the Alps, Mt. Blanc, to the final landing point in the middle of a lake in Zell am See—all in real time. 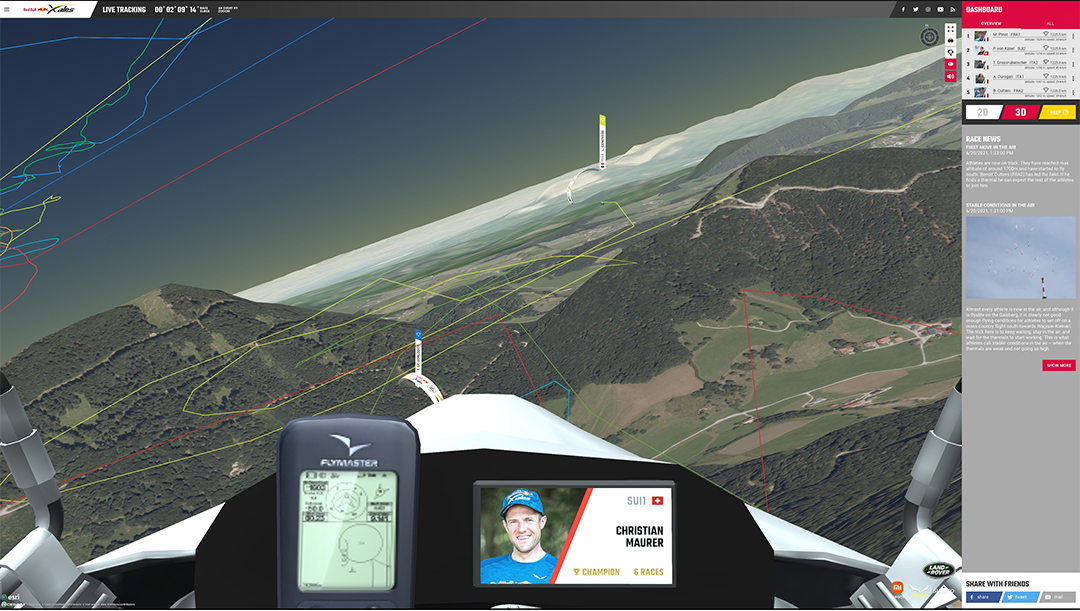 With the 3D Live Tracking app, users can experience the race from the pilot’s seat and see the flight paths of other competitors in real time.

3D live tracking comes with immense technical and logistic challenges. According to tech experts at zooom productions, data collection for the live tracking system requires "real-time, constant connection with up to 150 different people using cell phones and GPS." GPS data along with data for 2D and 3D maps must be fed into the Red Bull X-Alps system before it can be loaded onto web browsers at home. Once the previously recorded satellite and mapping data is uploaded and synced with GPS data from the live race, the app allows users to experience the race in real time via a hyperrealistic 3D environment, much like what the latest video games offer.

As staff at zooom productions prepared for the 2021 race, they knew they needed a more sophisticated system to support the 3D Live Tracking app. This year's race would be even more intense than the 2019 event. From dawn to dusk for the race's 12-day duration, the athletes would hike, mountaineer, and fly through the skies via paraglider as they raced to complete the longest, most challenging course in race history. A more complex race route meant more difficult terrain and, ultimately, a more intricate 3D map. The app that zooom created would need to keep pace.

With the 2021 race on the horizon, zooom used the powerful developer tools in ArcGIS Platform to improve the performance of its 3D Live Tracking app. Using ArcGIS Platform allowed developers to easily integrate digital elevation models underneath foundational mapping layers, both provided by Esri, creating a high-quality 3D experience. Additionally, the use of ArcGIS Platform enhanced the app's ability to cache (or store) more satellite imagery, which meant the 3D scenes could load without any lag or interruption.

The map enhancements allowed the app to seamlessly handle 80 million requests for 3D satellite images within the first three days of the race. App users were able to jump into the pilot's seat with athletes like race winner, Chrigel Maurer, whose choice to take a more northern route than his competitors gave him the weather conditions needed to paraglide his way to victory.

"There are no [visible] trails in the air. It doesn't exist. That makes it so exciting," says Ulrich Grill, zooom production's chief mechanic and cofounder and race organizer of Red Bull X-Alps, on seeing the athletes' flight paths on the app as they paraglide. This is especially true for Maurer who spent 87 percent of his race in the air.

Integration with ArcGIS Platform tools also allowed the team at zooom to create additional video content, including clips for television highlights, daily YouTube recaps, Instagram reels, and more. Because there was no lag in loading the satellite images, zooom was able to produce high-quality screen recordings and capture the action in real time, which was not possible in previous races.

"You can only do this if you have a very fast and stable system in the background that delivers the data—all kinds of data, tracking data, mesh data, and also the satellite images," says Maier.

Users of the 3D Live Tracking app can access statistics like the distance to goal, altitude, and speed of each competitor.

Racing Toward the Next Adventure

The success of the 10th edition of Red Bull X-Alps has created momentum and inspiration for the next race, which will take place in 2023. Esri and zooom are already working on numerous enhancements for the 3D Live Tracking app, including the ability to further specify an athlete's actions and track key performance indicators. According to Maier, focal points for zooom and Esri include finding a way to clean up GPS data for more precise flying and hiking paths.

Future enhancements to mapping features will also increase zooom's ability to identify when paragliding athletes incur airspace violations. The racecourse includes some protected or restricted airspaces, and currently, there can be a delay of several hours before all tracking devices can be checked and an athlete's route can be verified. Esri and zooom are working to implement automatic detection of airspace violations so that athletes can be alerted immediately and avoid time penalties for flying into restricted areas.

"I think what we pulled off this year is hopefully just a glimpse of things to come," says Grill. "And that makes us super excited for future collaboration [with Esri] and the experience we can bring to the people out there."

"And having that momentum within [Esri] as well, the excitement... that's a very important human factor. If you don't have that, things don't happen."

Discover more about the history of Red Bull X-Alps, this year's athletes, and the 2021 race to the finish in this immersive story, created using ArcGIS StoryMaps.