For the first time in its history, the city of Charlotte, in Mecklenburg County, North Carolina, was host to the Republican National Convention (RNC). This National Special Security Event (NSSE) presents a tall task for any public safety agency in a normal year, but during 2020, the Charlotte-Mecklenburg Emergency Management Office (CMEMO) of the Charlotte Fire Department had already been in a continuous activation state for months dealing with the COVID-19 pandemic. In addition, CMEMO dealt with natural disasters, civil unrest, and the delivery of six million meals to local food banks—all during the global pandemic.

The city of Charlotte is just shy of having one million residents today. It's one of the fastest-growing cities in the US and the commercial hub of the Carolinas. The daytime population of the greater Charlotte metro area is almost three million people. With the city's size and sustained growth, the load on public safety agencies balloons as well. When public safety agencies respond to any incident, it's critical that they can share information with each other in real time to efficiently manage the incident as well as ensure first-responder safety. Less than one year prior to the RNC, CMEMO built a new Emergency Operations Center (EOC) at Charlotte Fire Department headquarters and deployed Esri's Emergency Management Operations Solution. This geographic information system (GIS) solution was deployed to provide a foundation for real-time situational awareness, enhanced response capabilities, and community safety.

For starters, CMEMO needed a method to locate and identify all field personnel in real time. The traditional practice required field personnel to radio in their location continually, requiring additional EOC staff to manually update the positions on paper maps. These paper maps did not provide the real-time situational awareness that participating public safety agencies needed. With multiple agencies to support, it became increasingly difficult to track the location of staff and assets, which in turn made it more difficult to respond to an emergency.

"CAD/AVL [computer-aided dispatch/automated vehicle location technology] is sufficient to understand car location, but during special events, personnel aren't always in their car. We have public safety personnel who are in the field walking and on bicycles," said Katie Yeloushan, the lead GIS coordinator for the CMEMO team during this event. 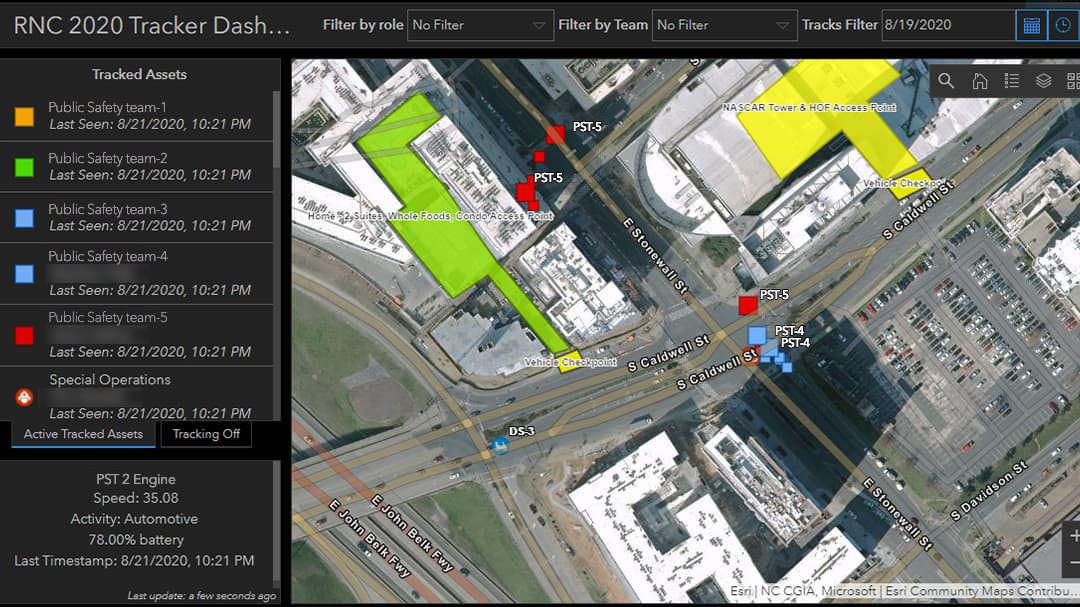 Battalion chief Robert Graham, deputy director of CMEMO, commented, "Our public safety partners were aware of new approaches we had been implementing throughout the pandemic and recent periods of unrest, so when the RNC happened, they were looking at how we could help support them. There wasn't a lot of time to make a big hoopla about it. One of the great things about the technology is that once you see it in action, it's not something that you can do without. It was more like, 'We've got to have this, so let's go—we need to get up and running fast!'"

CMEMO began using the ArcGIS Tracker mobile app on smart devices to understand the real-time locations of field personnel and be able to prioritize dispatch based on location. Tracker is an easy-to-use location-tracking app that enables command staff in the EOC to monitor the current location, past movement, and last known location of participating personnel. Users can turn tracking on or off manually or use a preset schedule, limiting the collection of location data to on-shift periods. Tracker also permits the review of bread-crumb trails in order to perform after-action reports (AARs) for critique of operational performance. Yeloushan added, "ArcGIS Tracker allowed us to track all our field personnel, beyond traditional car and radio tracking, filling any blind spots and providing enhanced situational awareness. For the first time, we were able to support the EOC with a more complete common operating picture on a map [geospatially] with regard to personnel location over an operational footprint."

With this modern approach, positions were updated automatically and instantly on a map in the EOC, permitting commanders to make smarter decisions based on current and accurate location of field personnel, organized by type. Being able to immediately locate the public safety asset that was closest to a live incident is a game changer during large-scale special events.

An additional operational requirement is to maintain shared situational awareness and understanding of the entire environment using one common operating picture (COP). To do this, CMEMO used ArcGIS Dashboards, which enabled agencies to monitor user-defined information products that not only displayed unit and dignitary locations but also road closures, weather conditions, changes in travel direction, assembly points, event venues, transportation assets, and more. This eliminated the guesswork inherent in using hand-drawn paper maps and trying to see the big picture from separate maps, screens, and even radio communications. This was critical for collaborative and effective event operations and management.

Yeloushan added, "By leveraging the sketch tools available in our app, it was easy for our users to draw points, lines, and polygons quickly, . . . updating and communicating any changes to the operations plan in real time. ArcGIS also provided us with the tools to support hot spot analysis of incidents, which we ran at the end of each operational period, helping us better plan for the next operational period. We also included them in the AARs."

Digitized security plans and dashboards were implemented for operational awareness and tracking key assets and indicators. Using the real-time tracking that was available to them, Charlotte public safety agencies were able to make decisions on the fly, provide quick responses, and eliminate redundancy.

By implementing the ability to locate and identify all field personnel in real time, and developing dashboards to maintain shared situational awareness for the RNC public safety partners, not only did Charlotte-Mecklenburg Emergency Management Office provide the RNC with additional capabilities, but also GIS became the new normal for ongoing, daily operations.

For more on site security and special-event management, download our ebook to learn how to manage safe venues and communities in the new normal.

One of the great things about the technology is that once you see it in action, it's not something that you can do without.