To achieve its mission, the department needs to be able to manage, analyze, and share location-based information in near real time. Spatial data plays an integral role in the police force's day-to-day operations by enhancing crime-fighting capabilities and optimizing officer safety.

Officers rely on an enormous amount of data to help answer questions—the who, what, when, how, and why. Yet it is the question of where that has proved to be most important for New Berlin police.

"Knowing where criminal incidents have occurred helps determine how officers respond and, ultimately, determines their safety," said New Berlin police sergeant Daniel Hanlon. "Being armed with insights into the where allows officers to be better equipped and prepared to do their job—increasing the likelihood they will perform their duties effectively and, most importantly, return home safe each day."

New Berlin Police Department (PD) faced several roadblocks that stood in the way of achieving mandated objectives. The flow of departmental communication was in need of improvement. Officers and department support personnel sometimes had difficulty in quickly accessing current location data, key to providing situational awareness—and a critical need for officers responding to calls for service.

An important component of the start of every police department's shift is the daily roll call, which includes briefings led by the shift supervisor. These briefings are the primary means for passing on key information to the officers, detectives, and other personnel assigned to that shift.

A top priority the New Berlin PD wished to address was locating and extracting important data for roll call from the record management system (RMS) in a timely manner. The department's RMS was used to create and manage officer incident reports but lacked an application to disseminate relevant information in an efficient and expedient manner. 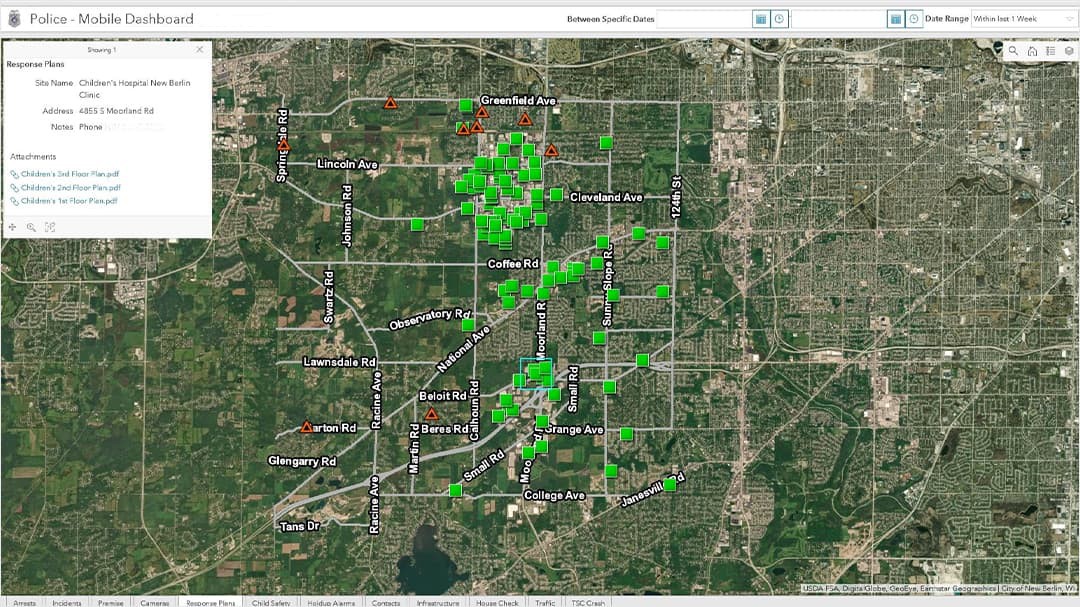 "Many of our officers' reports were delayed due to the review and approval process. As a result, information sharing was also delayed," said Hanlon. "To compensate, an officer or sergeant from a previous shift would be required to personally provide call information to other officers on the next shift. This was obviously a flawed system, as critical, time-sensitive information was often late or missed altogether."

The City of New Berlin decided to augment its record management system and enhance the existing geographic information system (GIS) for several departments. One outcome would be a new operations dashboard—a game changer for the police department.

"Location intelligence is vital to police work," said Hanlon. "Seeing what the Lincoln PD was doing with GIS was a real eye-opener. Given some of our internal challenges, I was confident this was the right answer for our department. That transformation would begin with improved information sharing at roll call."

In step with the city's new GIS initiative, New Berlin PD got to work on its unique GIS platform. The city's GIS specialist, Jarrett Livesey, said the process of building a police operations dashboard was unique, creative, and—at times—challenging.

"Having to move data to a secure database compliant with criminal justice information systems, accessible only to the PD, meant there were understandable trials and tribulations. This inherently comes with the task of transitioning new software to places it may not yet be ready to go," Livesey said. "But at the end of the day, this project allowed me to use Esri technology like I never thought was possible. As a result, my skills as a GIS professional were elevated to another level."

The operations dashboard began a technological evolution within New Berlin PD. Stakeholders collaborated with Livesey as well as a GIS consultant, Brian Fausel, to bring their vision to life. 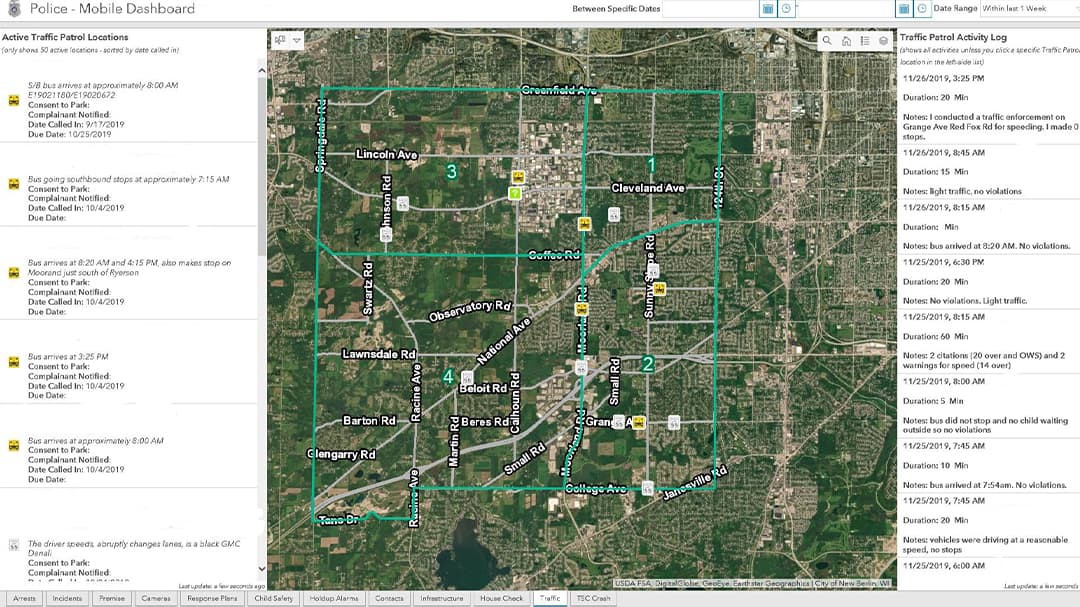 The process of augmenting the RMS with GIS has been far-reaching for the entire New Berlin Police Department.

"GIS has transformed our police department into a data-driven organization. We are more efficient, accountable, collaborative, and imagery driven, which helps drive retention of critical information for our officers," said Hanlon.

The implementation of the ArcGIS Dashboard provided an additional benefit. It served as the impetus for a departmental policy change mandating that officers' report summaries be entered into the GIS as soon as possible after a call. This helps ensure that call response information is uploaded, mapped, and shared in near real time, providing situational awareness for officers in the field and at the next shift roll call. This capability drives more informed decision-making, which helps officers prevent and solve crimes.

"Before our operations dashboards were implemented, information sharing at roll call would partly consist of sergeants extrapolating pertinent information from completed reports from the RMS. As a result, our officers were not always receiving thorough and up-to-date information," said Hanlon. "GIS revolutionized roll call and, in turn, the overall level of information sharing throughout the entire department. It opened up a new paradigm for us, transforming our communications and workflows and helping to expedite report information to our officers in the field."

Using ArcGIS Dashboards, officers are now better prepared with full situational awareness when responding to a call at a particular location. They can quickly and easily query the incident address in the police dashboard, which provides very specific information when it's needed. This can include a wide array of details, such as officers' notes on previous responses or arrests at the location, or floor plans of buildings—critical for situations such as an active shooter.

"GIS brought our records management system functions to life," said Hanlon. "With near real-time data available for reference by location, our officers now have far more insight into what they are walking into when responding to a call. They are now going into a scene better prepared and safer, with detailed information that provides situational awareness."

"GIS brought our records management system functions to life. With near real-time data available for reference by location, our officers now have far more insight into what they are walking into when responding to a call. They are now going into a scene better prepared and safer, with detailed information that provides situational awareness."

See how GIS can support your agency