To celebrate Maine's 200th anniversary, more than 10,000 people from all over the state finally gathered in August 2021 for a Bicentennial Parade after almost two years of postponements.

Due to the pandemic shutdowns, the parade was rescheduled twice, which left many of the coordinators, first responders, and volunteers thinking it would never come to fruition. When Rosemary Mosher, data analytics and visualization specialist for the City of Auburn, Maine, got the call that the parade was going to happen, she was surprised.

"The police chief contacted me and said, 'This is happening. Do you have that parade map?' This was a larger event than we'd ever done before, but we'd been working up to doing a big event like this for many years. We got to work straight away."

This one-day celebration was the largest event the cities of Auburn and Lewiston had ever collaborated on. With such a tight timeline, safety was at the forefront of everyone's mind. Mosher, volunteers, and other GIS professionals from all around the state had 23 days to produce comprehensive digital maps of the event environment and surrounding areas to ensure situational awareness, accurate asset tracking, and efficient emergency response.

Challenge
To ensure public safety for the largest state celebration ever collaborated on between the two cities, organizers needed a way to locate assets, monitor activities in real time, and coordinate situational awareness and emergency response.

The day of the parade, the Auburn and Lewiston police and fire departments set up 10 staged sections that had been mapped by Mosher's team. The official parade route was 1.3 miles of Riverside Drive, but police and fire staged .75 miles farther and had walking units at the front of the parade. Each section had 10 safety units and included a police officer, an emergency medical services (EMS) professional, and a police dog. These unit locations were tracked on mobile apps and dashboards for quicker dispatch and enhanced visibility.

"As incidents developed, we needed to be able to see who was the closest and say, 'Unit 1, go here or here,'" Mosher said.

Supervising the locations of the high-profile participants and emergency situations was a priority for the command posts, GIS professionals, volunteers, and security personnel. The safety units needed the ability to see the locations of participants in the parade to be able to quickly dispatch help for medical emergencies.

Mosher and her collaborator Jim Ward, GIS manager/coordinator in the Public Works Department of Lewiston, applied their ArcGIS Online skills to create new layers of event-specific details like parade routes, safety unit locations, water stations, and parking lot maps. Location tracking in ArcGIS was used to capture the locations of first responders in real time and monitor high-profile personnel in the parade. With ArcGIS Field Maps, accurate location data was collected for assets of interest, such as emergency response vehicles, and the 10 zones to which the safety units were assigned.

"At one point, we lost power in one of our command posts, so all of those maps we had went down," Mosher said. "The team [members] transitioned the maps and apps to ArcGIS Field Maps on their cell phone and continued on."

In the command center, ArcGIS Dashboards displayed the authoritative digital map with the real-time locations of emergency responders. 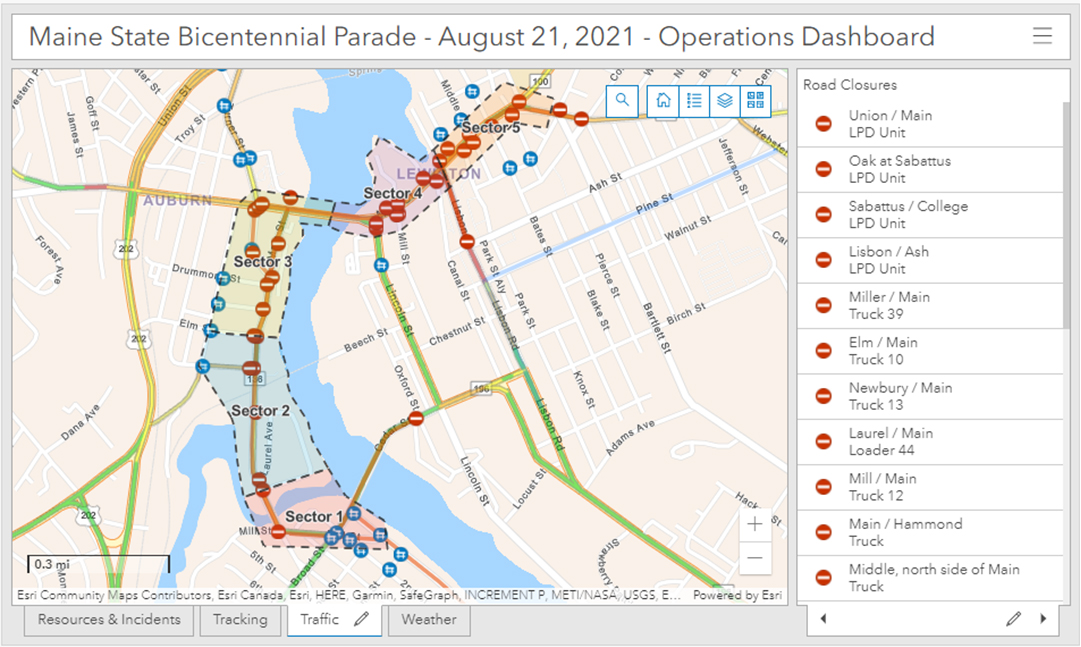 A view of the traffic tab on the dashboard showing the location of all road closures and barricades.

The collaboration between the two neighboring cities and state agencies was successfully coordinated using the authoritative digital map. Dispatchers were able to identify the unit nearest an emergency, and first responders reached their destinations more quickly and efficiently. The ability to accurately locate assets on mobile devices helped units maintain situational awareness and crowd safety. After conducting a post incident analysis of the events, Mosher and her team concluded that the use of Esri ArcGIS technologies contributed to the success of the strategic and tactical objectives associated with Maine's Bicentennial Parade, and it will be carried forward to other projects.

"It was great to leave the parade and say, 'Wow, we've pulled this off,'" Mosher reflected. "And we pulled it off without the technology being front and center. It was just part of what we did. When you're taking baby steps, you don't realize how far you've gotten until you're all the way across the room." 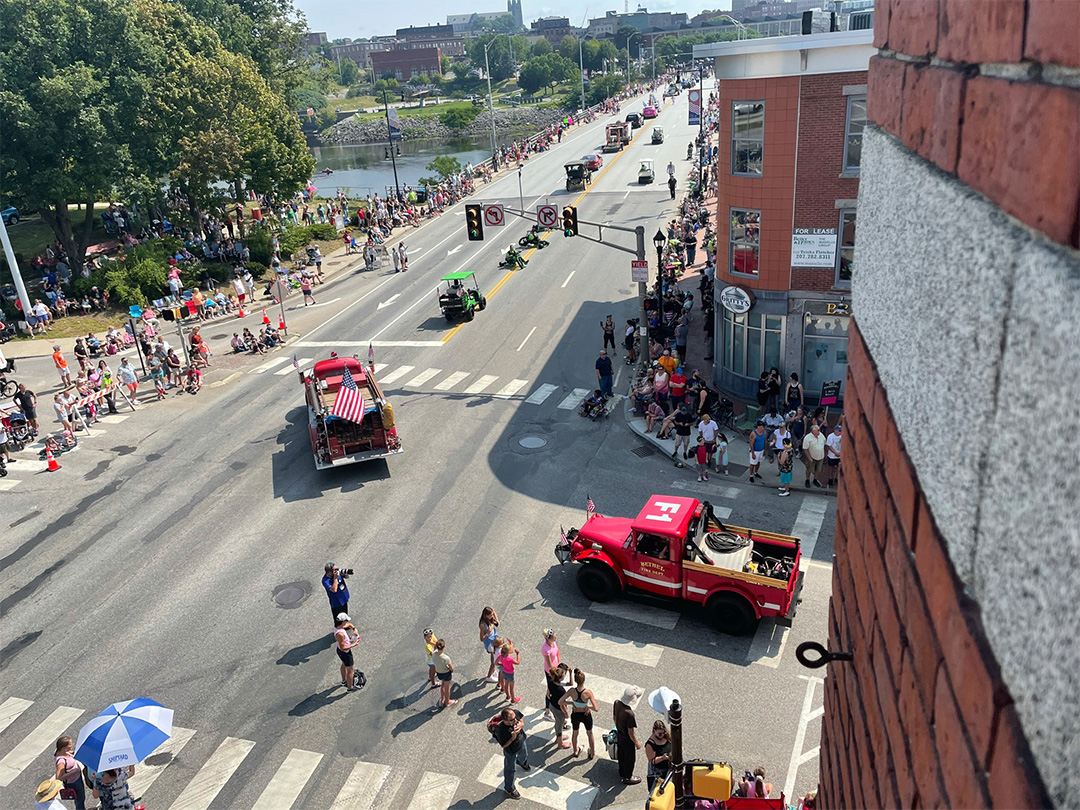 Using Esri technology has transformed how we handle, coordinate, and respond to large events. The bicentennial parade was meaningful for our community and for our state. Knowing these tools were in place helped to keep the participants, spectators, first responders, staff, and volunteers safe and connected. It made all the difference.