GIS technology has long been used by police to help identify crime patterns and make decisions about where and when to assign resources. But modern GIS technology can help police do much more by giving agencies the ability to create an enterprise environment that supports every police mission, including advanced analytics, dashboards to fit many needs, public engagement apps, and maps and apps that provide real-time situational awareness for officers in the field. The Houston Police Department (HPD) is one of these agencies, using enterprise GIS to save time, streamline operations, and better serve the Houston community.

The HPD is using the flexibility of Esri technology to build purpose-driven apps that meet the many missions and needs of the department, helping it reduce crime, meet mandates, and keep the residents of Houston safe

As with many other cities, Houston started 2020 enjoying a vibrant economy, but as COVID-19 continued to spread and stay-at-home orders were issued, businesses shut down and unemployment claims rose. As spring dragged into summer, many American cities, Houston included, began to experience increases in crime, including an alarming year-over-year increase in gun violence and homicides. HPD also began seeing the rising incidence of street robberies and burglaries associated with two very specific methods of identifying and targeting victims. These methods are known as jugging and sliding.

Jugging is when an offender identifies a potential victim whom they suspect is carrying money. Jugging is often perpetrated by watching locations such as ATMs or bank drive-throughs for potential targets. The offender then follows the victim to another location with the intent of robbing them or burglarizing their vehicle or residence. The common factor in jugging is not the crime incident type but how the victim is identified and followed before the commission of the crime. Tracking jugging incidents can be difficult because the victim will not typically know that they were followed, and the incident will be reported as either a robbery or a burglary.

Sliding is another crime pattern that has increased in Houston, in which offenders target victims while they are stopped at gas stations and preoccupied with paying and filling their tanks at fuel pumps. The modus operandi of these kinds of thefts usually involves two or more perpetrators. The suspect vehicle, often with tinted windows to conceal a back seat passenger, pulls alongside the victim's vehicle; the perpetrators then quickly enter—slide into—the targeted car and steal whatever they can grab while the victim is distracted at the pump. The suspects then drive away before the victim even knows what has happened. As with jugging, sliding can be hard to identify, and incidents are often underreported or reported as other crime types. 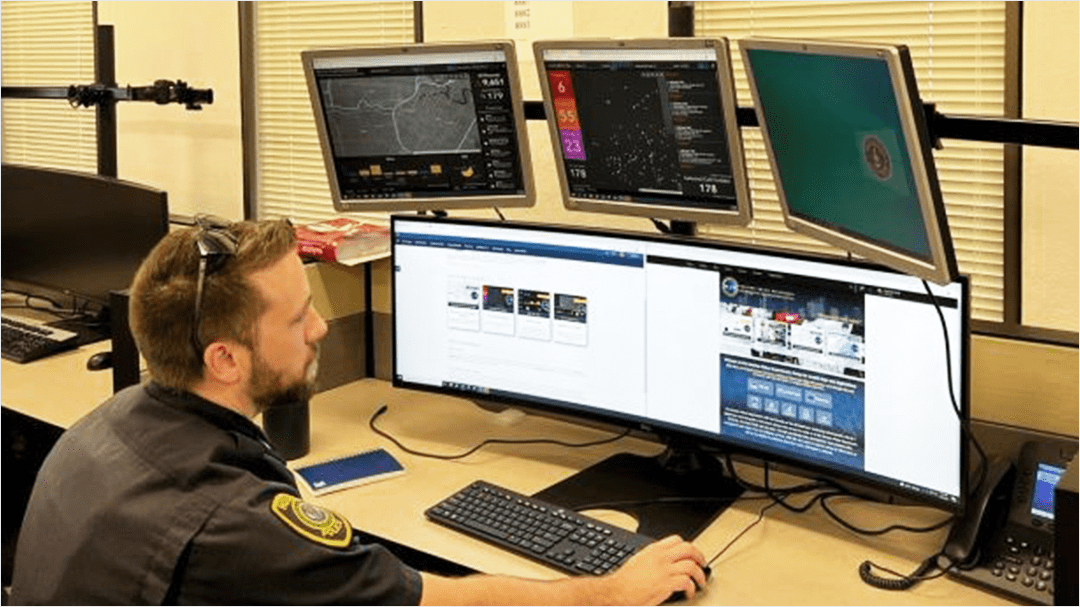 In response to these new and disturbing crime trends, HPD's GIS unit needed to get data and analysis into the hands of officers as quickly and efficiently as possible. The HPD crime suppression teams (CST) are dedicated tactical units that consist of one sergeant and eight officers who work together using analysis to identify crime trends and patterns and proactive policing methods to reduce criminal activity. But they needed a better way to put analytical products into officers' hands. The HPD GIS unit was tasked with creating a mobile application that would help the officers get the most current information and promote situational awareness for all team members. The finished product is a dashboard that provides CST officers with an all-in-one self-service app that includes a map of current and historic jugging and sliding incidents and the ability to filter by incident type. Officers can also read reports within the dashboard without having to open another application. CST members can now have access to all of the information and analysis they need in the field where they need it.

According to Lt. Freddy Croft, the GIS unit supervisor, "Staff wanted a way to do things out in the field such as capturing data on-site and taking photos. The new app made data management much easier. Officers can use the app in their cars when on patrol. This saves time on data gathering, organizing, and presentation by the analysts. To get the information that is now automated through this application, analysts would spend two hours a day providing what this application offers instantaneously." Officers now have the tools they need to answer when and where questions so that they can focus on the who while conducting investigations.

This mission-focused app put the power of analytics in the hands of nontechnical users, but a one-size-fits-all approach doesn't work for all the agency's needs. Using the same technology, the GIS unit has the flexibility it needs to build purpose-driven apps that fit the needs of the current agency missions it is supporting today, as well as the unforeseen missions of tomorrow. As new projects and requests come in, the GIS unit responds by identifying the appropriate tools to fit new missions and end-user needs. Other applications they have created include dashboards that show recent crime hot spots, current calls for service, and gang information—all of which is available at officers' fingertips on their in-car computers or via their mobile devices.

As the HPD GIS unit has become more proficient at building these types of apps, staff have also been able to assist units and teams within HPD and help them identify the best GIS applications to fit specific agency needs. Many of the ideas generated by the creation of the CST app are also making it possible to share information and best practices with other agencies and GIS users in the Houston community. The technology has the flexibility to fit any mission; the key has been starting the conversation and identifying the need.

The primary goal for our unit is to make our customer's life easier. The application made our patrol officers' jobs much easier and more efficient while they were out in the field. Being able to add new information is a huge improvement.