Using GIS to Build Highways in the Skies

The Federal Aviation Administration (FAA) works hard to secure our national airspace, maintaining over 5.3 million square miles of domestic airspace for the United States. In Michigan alone, more than 2.7 million residents and 283 cities and townships live and operate under controlled airspace. One such community, the city of Taylor, is home to 62,000 people and operates completely within federally controlled airspace. Nestled just east of Detroit Metropolitan Airport, 20 percent of the city of Taylor is blocked by the FAA from being able to fly drones. No commercial or recreational drone operation may occur within the city without getting authorization by the FAA or Detroit Metropolitan Airport Air Traffic Control (ATC). These types of restrictions, along with other standing FAA regulations, create confusion for both residents and community officials who need to know when and where drone pilots may safely operate.

To help meet the demands of drones in local airspace, the FAA has introduced the UAS Data Exchange, a partnership between government and airspace management solutions provider Airspace Link facilitating the sharing of airspace data between the two parties. Under this umbrella of cooperation, the first program available to drone pilots is known as the Low Altitude Authorization and Notification Capability (LAANC). In the United States, the LAANC program is intended to directly support the integration of unmanned aircraft system (UAS) vehicles into national airspace. Regulators are interested in supporting technology innovation while still providing air traffic professionals with visibility into where and when drones are operating. Local governments play an important role in supporting this industry and remain the strongest resource for up-to-date, on-the-ground information as well as ordinance enforcement regarding the use of drones within each community. The geographic information system (GIS) data already being maintained by the City of Taylor will pave the way for the construction of new unmanned aerial vehicle (UAV) infrastructure. 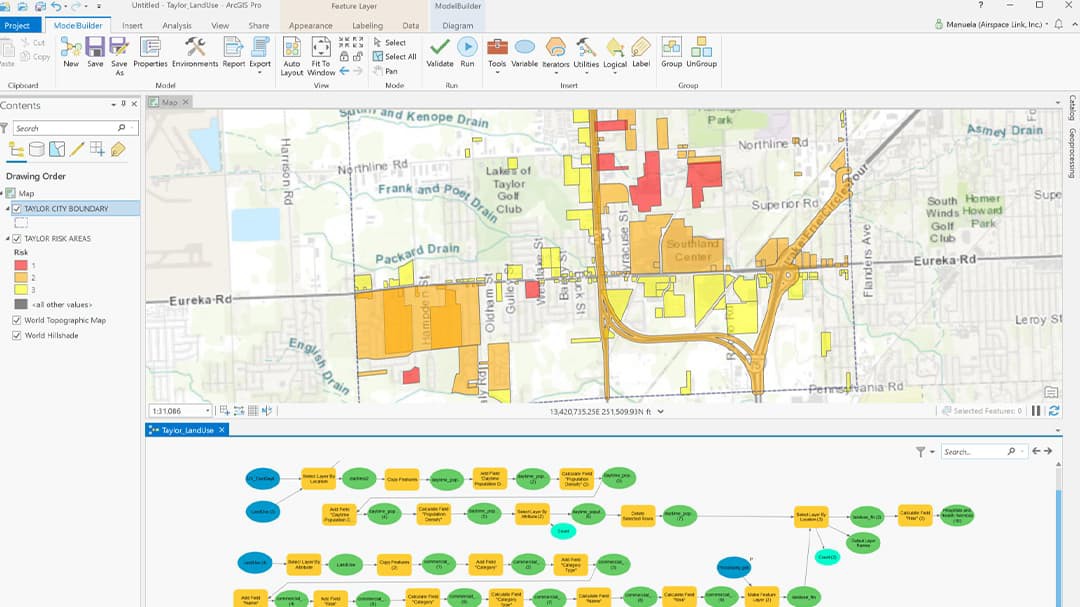 Existing GIS data layers are used to quantify and calculate ground-based risks. Data is gathered from a wide variety of datasets maintained by cities.

Airspace Link's AirHub for Government is the first-ever tool for communications from local government to the drone industry. Airspace Link facilitates the sharing of ground-based data between the FAA, the State of Michigan, the City of Taylor, and the UAS industry, aggregating data from dozens of sources to inform operators about potential risk factors and advisories during operational planning. This includes GIS data regarding schools, hospitals, government buildings, helicopter pads, airports, stadiums, land use, zoning, population density (at different times of the day), road rights-of-way, rules, regulations, and ordinances. Taylor now clearly maps FAA data with local government regulation and ordinance data in a single platform, easing communication with the drone industry about scheduled and unscheduled advisories in the area. As Taylor builds flight advisory areas, Airspace Link provides tools to assess the impact to recreational and commercial drone operations. The city can simulate the impact of having too many advisory locations, protecting the growth of the drone industry.

As the industry continues to evolve, emergency managers will utilize GIS tools to make UAS Volume Reservations (UVRs)—granting authorized drone service providers the ability to issue notifications to drone operators regarding air and ground activities relevant to drones' safe operation—and share them with multijurisdictional stakeholders. The National Aeronautics and Space Administration (NASA) is already hard at work proving many of these concepts, and cities are preparing by working with private industry to implement solutions to manage these types of airspace reservations.

In addition to safety, urban designers are often concerned about sound levels in neighborhoods. Mechanical buzzing doesn't fit into anyone's idea of a pleasant community. With the appropriate application, GIS can be put to work to track the number of flights intersecting  subsections of a community and "deactivate" airspace for a predetermined cooldown period. In the future, urban airspace designers will construct drone corridors, using a combination of risk and noise pollution factors. 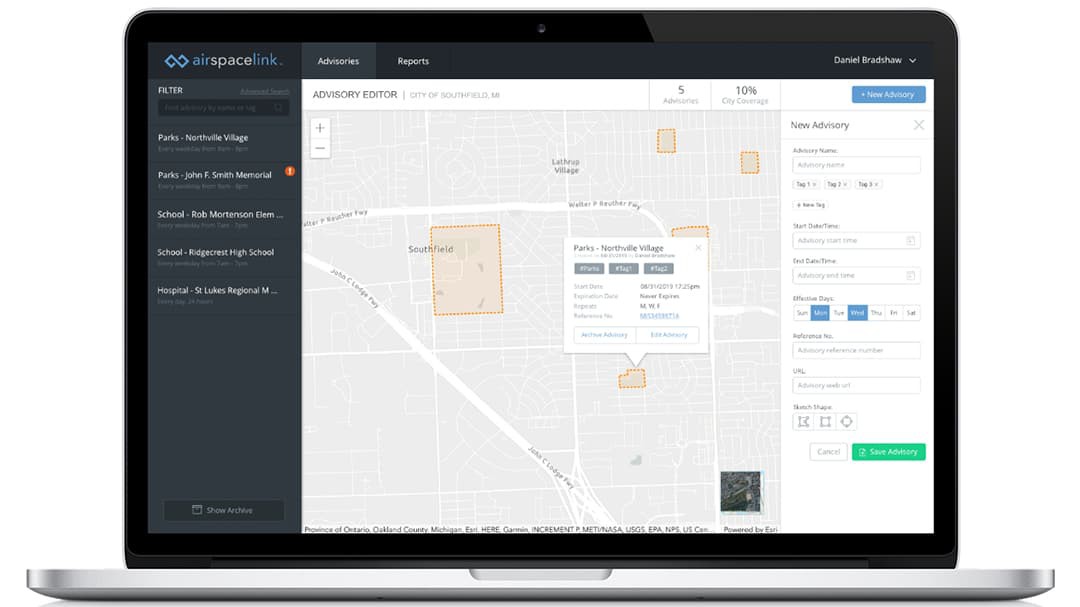 Both commercial and recreational drone pilots are required to submit a request for drone operation to the FAA for approval at varying altitudes. Operators of any drone weighing over one-half pound must submit flight plans in controlled airspace.

As technology advancements push innovation into the skies, city managers can lean on the GIS data already being generated within their communities to prepare themselves for the "Jetsonian" future. Don't wait until unmanned vehicles begin operating before you decide how to participate in drone integration and innovation.

For more information on how Airspace Link can help you integrate drones into your community's airspace safely, visit go.esri.com/AirspaceLink-Partner.

Integrate drones into your community's airspace