Colorado DOT: Building Back Better and Smarter for a More Resilient Transportation System

The Colorado Department of Transportation uses GIS tools to build a strong foundation for its resiliency efforts, preserving and rebuilding infrastructure in the most strategic and cost-effective way.

After severe-weather events, the initial inclination may be to repair or rebuild damaged infrastructure, but if the original design was somehow lacking, the repair ensures potential failure.

Additionally, there are the costs beyond those of reconstruction to consider. Some road sections and bridges are so critical to a geographic area's economic and social well-being that their speedy restoration to full operational capacity is a necessity. Others are of secondary or tertiary importance, and while their being out of service may be inconvenient, their reconstruction can be delayed if necessary.

Determining the true value rather than just the cost of restoration work is something the Colorado Department of Transportation (CDOT) has been doing with the support of geographic information system (GIS) tools from Esri. The aim is to bring greater coherence to resiliency planning and make resilience part of the day-to-day activities of CDOT.

CDOT's resiliency program manager Lizzie Kemp says a catalyst for the department's resiliency planning came when staff realized that many of the state's road facilities that were destroyed by flooding in 2013 had also been wiped out by a previous flood, in 1976. The department was also motivated by a federal requirement for the periodic evaluation of facilities repeatedly damaged during emergency events.

In the aftermath of the 2013 storms, then Colorado governor John Hickenlooper set up the multisector and statewide Colorado Resiliency Office (CRO). Rather than rely on the Federal Highway Administration’s  (FHWA) Emergency Relief Program for Federally Owned Roads and simply wait for things to go wrong before taking remedial action, the CRO was to be proactive in terms of resilience. 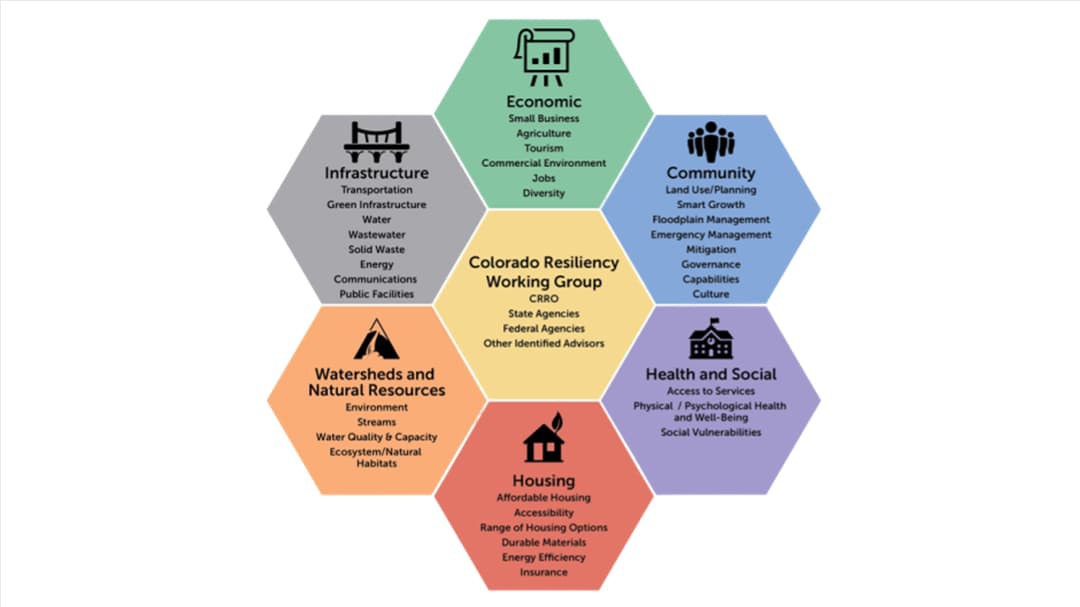 CDOT took a strongly proactive approach to resiliency, establishing its own dedicated Resiliency Working Group (RWG) and Executive Oversight Committee (EOC). Established in 2015, a tenet of the RWG is that its influence should be from the bottom up and not from the top down. CDOT's EOC meets every other month and the RWG meets monthly. From the beginning, both have enjoyed strong, regular participation from stakeholders at all levels. After several years of successful operation, their work was formalized in a 2018 state-level policy directive.

CDOT's first proactive look at risk and resiliency focused on assets and potential hazards across Colorado on Interstate 70. This route forms Colorado's main east-west corridor between Utah and Kansas, and parts of the interstate's Colorado section are among the most challenging in engineering terms. The dual-bore, four-lane Eisenhower Tunnel, for instance, passes under the Continental Divide in the Rocky Mountains and is the highest point on the US interstate highway system. Then there is Colorado's climate to consider. This might best be described as complex and its effects on road infrastructure as profound—2013's storms saw more than 400 miles of roads rendered inoperable.

The I-70 project examined both the risk of climate related damage from CDOT’s perspective, but also in terms of the consequences to the road users – the traveling public and the impact on freight operators.  Analysis used a variant of the seven-stage Risk Analysis and Management for Critical Asset Protection (RAMCAP) methodology to examine a wide range of threats including floods, avalanches, and rockfalls.

The goal of the project was to develop a cost-benefit analysis to guide CDOT staff in their maintenance and infrastructure planning. The methodology, following the urging of the Federal Highway Administration, was focused on determining the quantitative costs and benefits of various investments designed to harden Colorado's highway infrastructure. The analysis set out to determine the most critical highway assets on the I-70 corridor and to develop a criticality model maximizing the triple (social, economic, and environmental) bottom line considerations. 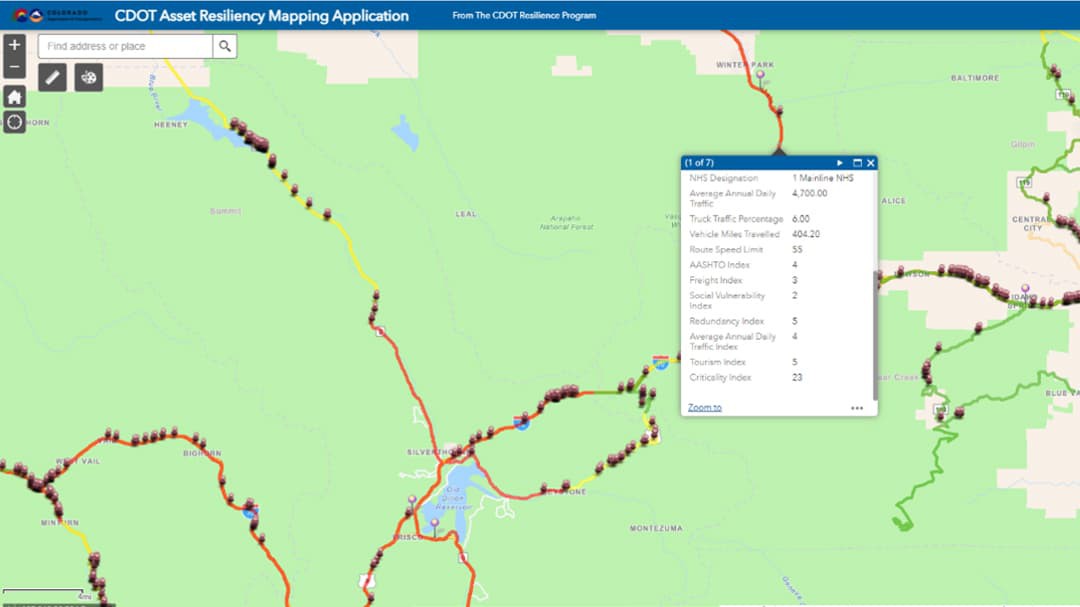 To determine criticality, the study looked at not only total traffic volumes but also the value of freight carried, as well as the impacts on tourism. A total of 35 socioeconomic variables were used to provide determinants of how quickly communities would rebound from an event as well as what the influence (if any) of alternative routes would be. GIS was the underpinning technology across the process, providing a dependable predictive tool.

The study helped establish that more than 20 percent of the Colorado portion of I-70 should be rated Highly Critical. In the cost-benefit analysis, CDOT sought to answer two essential questions: "How much would it cost to buy down the risk?" and "Is it worth the investment?" From the I-70 analysis, CDOT was able to calculate the cost of its own annualized risk at $6 million, most of that related to rockfall, with flooding as an important secondary risk. But the cost of the annualized risk to road users was significantly higher—over $164 million—with 75 percent of the cost related to road closures from flooding, with rockfall risk coming in second. 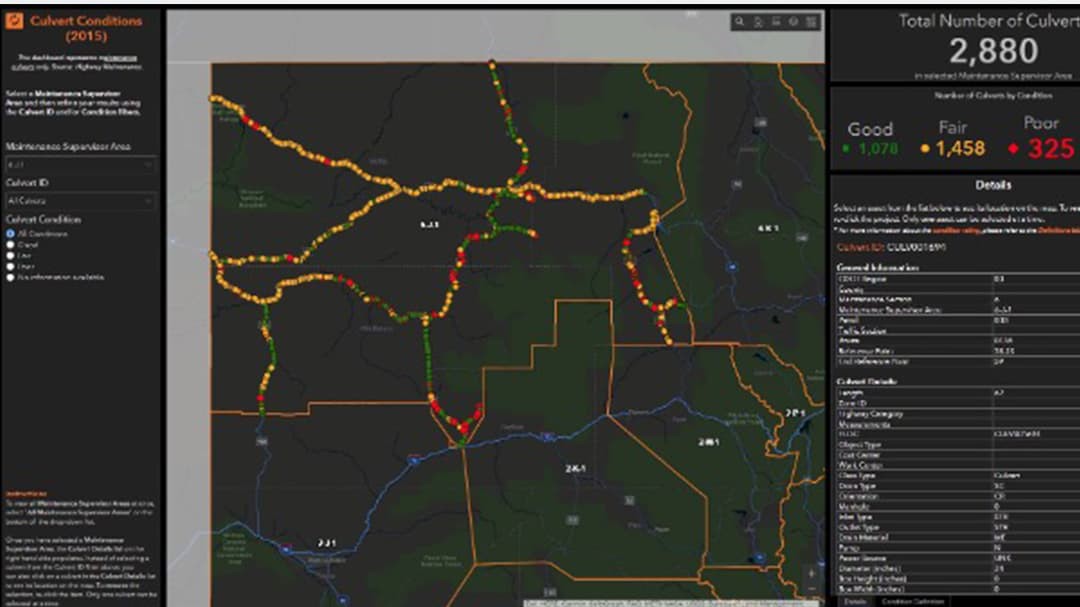 The initial study found that a significant portion of risk and potential damage could be attributed to nonperforming culverts. As Kemp notes, culverts are a lesser-cost item, but they represent an opportunity to achieve significant resiliency improvements at relatively little cost.

Five or six years ago, CDOT did not have a thorough understanding of where its 65,000 culverts were, much less an appreciation of their condition. It was, says Kemp, a "massive effort" to get out there; document them all with GIS apps from Esri; and rate each as good, fair, or poor. Now, there is a far greater understanding of each culvert's location, condition, and importance. As a result of the I-70 project and subsequent work, decision-making in terms of expenditure on culvert maintenance and repair is data driven and supported by one of several ArcGIS Dashboards. 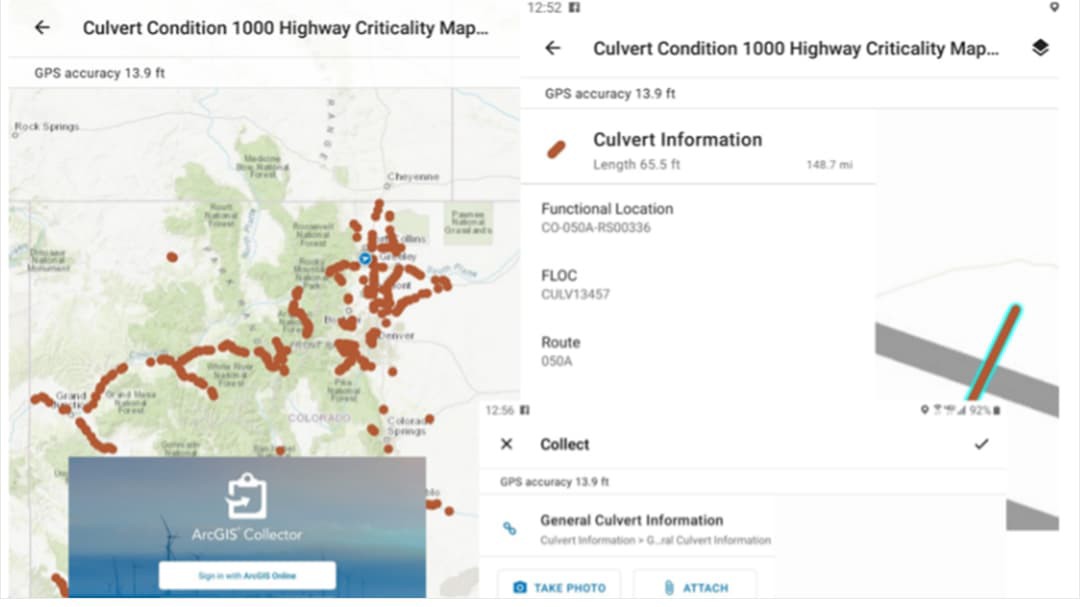 Cooking Up a Storm

The I-70 project involved a data-intensive, GIS-based effort, with many of the calculations conducted by an outside consultant. Kemp and other CDOT staff sought to bring the same methodology and expertise in-house so CDOT could replicate the methodology state-wide. Using internal resources, Kemp wanted to create what she calls "a cookbook for how to calculate risk."

That "cookbook" was eventually published in August 2020. It includes methodologies for calculating a threat paired with each asset (flood with roadway, flood with bridge, etc.). These methodologies have been moved into a spreadsheet environment, which greatly simplifies the data entry and calculation processes, with a future goal to build batch-processing capabilities to analyze a large number of assets at once.

Water volumes at specific locations were calculated with the US Geological Survey (USGS) StreamStats application, and Kemp worked with CDOT's travel demand modeling specialists to determine the effects of alternative routing for any roadway that would be blocked by a weather-related disaster. Local knowledge from traffic engineers helped ensure that information was complete in terms of validating calculated detours. Closure effects were assessed on a link-by-link basis and in both directions to understand the full impact of a potential road closure. 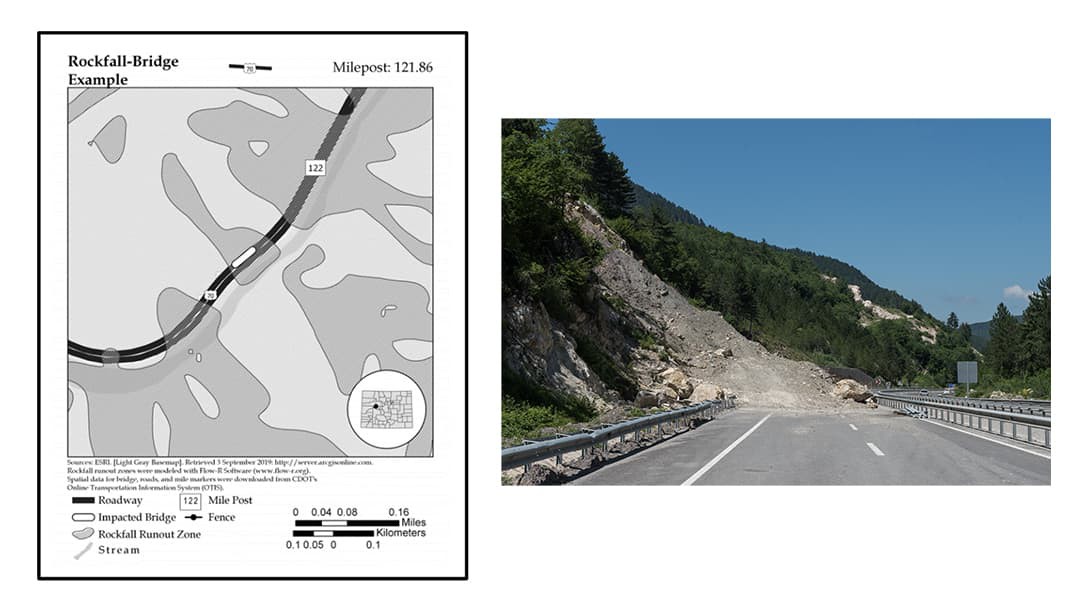 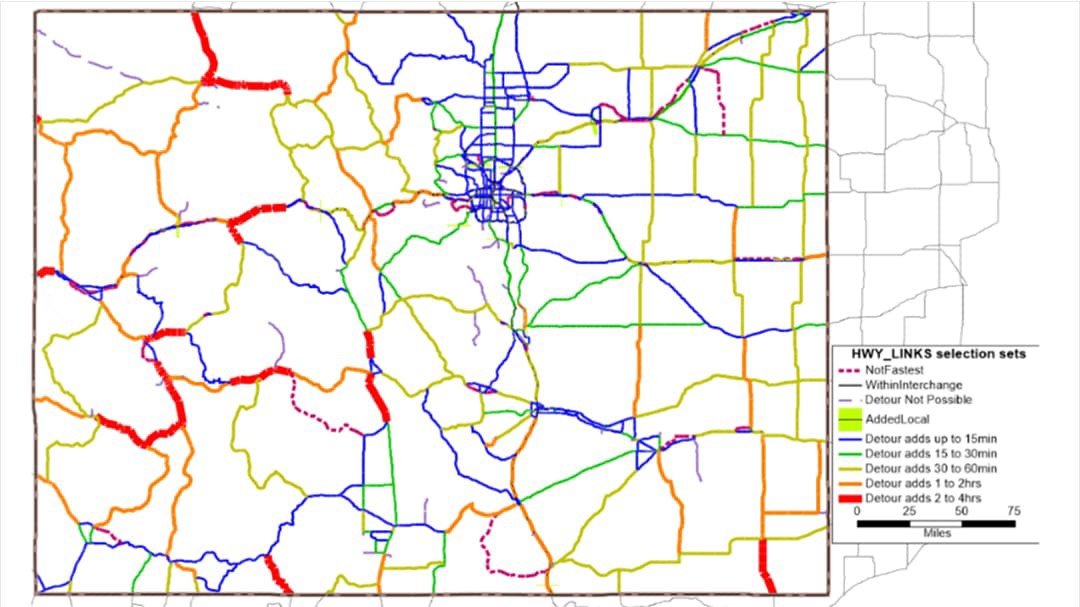 To analyze each asset and threat pair, the model was run twice. The first run established baseline condition and cost, while the second run analyzed the reduction in risk achieved by proposed mitigation. Taken together, the two model runs established the benefit-cost ratio.

Specific outcomes included predictions, for instance, that a rockfall in the Glenwood Canyon section of I-70 would result in travelers making a 187-mile, four-hour detour. Beyond some of the straightforward calculations, however, are more sobering statistics.

According to the Federal Emergency Management Agency, blocked and closed roads have a direct impact on businesses' survival—40 percent of local businesses never reopen after a disaster, and 90 percent of small businesses fail within a year if unable to reopen within five days. The costs of delays to shippers can be equally devastating: depending on the product, a delay can cost shippers between $25 and $200 per hour of its duration.

The end result of Kemp's calculations are that, on average, every $4 spent on proactive resiliency saves at least $25 in repairs, and the message is clear: preparing makes good sense.

This was just the start for Kemp, however. She has a working list of projects intended to take resiliency forward within CDOT. High on her list of goals is to help the agency develop resiliency performance measures, and to update CDOT's resiliency manuals. The criticality analysis has led the agency to investigate new redundancy measures, including a statewide detour map and better ways to gauge the impact to remote communities.

Finally, Kemp is in the process of completing five case studies that she hopes—to continue the cookbook analogy—will help bake resiliency into various aspects of CDOT's day-to-day business processes. Kemp indicates that the case studies should be completed and available by the end of 2021.

Kemp hopes the agency will incorporate the four Rs into its planning and asset management processes: robustness (can an asset withstand threats?), redundancy (is there a backup system/plan?), resources (can a threat be identified and addressed with what is already available?), and rapidity (can functionality be restored in a timely way?).

The result will be a matrix of mitigations that, according to Kemp, highlights how organizations need to be just as resilient as the assets they manage with backup servers and cross-trained staff.

In the end, she says, it comes down to being able to make robust decisions, confident in the knowledge that they can be justified. If, for instance, an asset is noncritical, is there any need to harden it? And if a more critical asset is damaged in a weather-related disaster, can staff demonstrate that building back better makes good long-term financial sense?

For such questions, the answers are in the data.

Find out more about Environmental Sustainability